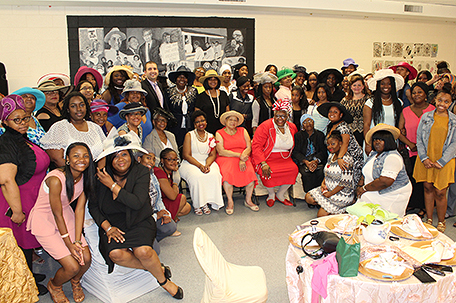 The old-fashioned tea party has become a favorite way to entertain friends and celebrate a special occasion. The Annual Mother and Daughter Tea Party held at Lankenau High School was an opportunity to do just that, in an environment defined by the elegance and grace of a traditional garden tea party.

Taking inspiration from the Mad Hatter in Lewis Carroll’s “Alice’s Adventures in Wonderland,” guests wore their most extravagant chapeaux to the tea party. The flamboyant hats, a party requirement, were adorned with vibrant flowers, bows and feathers. There also were wide-brimmed hats accented with imaginative accents ranging from colorful scarves to spring-inspired ornaments.

The school cafeteria, on Wednesday, May 31, 2017, was transformed into an elegant summer garden, with accents of inviting flowers, emitting intoxicating floral scents. The tables were set with bright-colored, vintage linens, assorted china cups and teapots and masses of fresh blossoms. They also were adorned with classic layered place settings. And, for the Mad Hatter tea touch, centerpieces were slightly off-centered and there were mismatched pieces of china.

Obviously, the tea was the star of the party, the chosen varieties enhanced the party theme — Tea Time.  There were an array of choices, including floral and fruit- flavored teas, like orange spice and chamomile, a few classic Earl Grey teas and green and mint tea blends. For a traditional touch, finger sandwiches, tea cakes, macaroons and scones were served. Pastries, fruit and a breakfast casserole rounded out the menu’s offerings.

To kick the party off, Mistress of Ceremonies Lillian Miles shared with the guests the history of the traditional tea party. She also guided them on the basics rules of tea party etiquette. Before the event, Miles, a retired Philadelphia teacher with 43 years of service, shared with the girls’ proper dress code rules and how to properly greet and interact with guests.

The manners the young women displayed were a far cry from what Alice experienced at the Mad Hatter’s tea party. The Hatter is characterized by switching places on the table at any given time, making short, personal remarks, asking unanswerable riddles and reciting nonsensical poetry. Unlike Alice, who was not pleased with the Hatter’s behavior, Miles, an initial program volunteer, believed the young ladies were exemplary in putting their manners and conversational skills into practice. “It’s important to share these social skills with all young women as they prepare for adulthood. Their mastery of the subject will serve them well,” she said.

The tea’s tradition was launched by Marva Price, a member of the schools administrative staff. “The tea has become a community rite of passage,” said Price. “It is presents a wonderful opportunity for us to reach out to our youth and celebrate a special time in their lives.”

For the past six years, Price said the high school has enjoyed providing mothers and daughters with an opportunity to spend time together surrounded, especially during the hectic graduation season.

The event was a team effort, said Price, with many of Lankenau’s students pitching in. While mostly a female affair, male students volunteered as parking lot attendants and work the sound and digital show.  They also escorted the guests to the cafeteria from the school’s reception area.

The tea’s wait staff was a group of young female and male volunteers from sophomore and junior classes. They also were getting a sneak peek as they consider next year’s tea. Some of the young men, following the event, diligently helped put away tables and chairs, returning the space to a traditional high school cafeteria.

E. Marie Lambert, Director of True Way Youth Empowerment Foundation, spoke at Wednesday’s tea about the responsibilities the young women must embrace as they advance to maturity with the help of their mothers. Lambert, who was accompanied by her daughter and niece, also advised the young women to focus on building their self-esteem as a means to achieving their dreams.

“Don’t let anyone discourage you as you endeavor to pursue your dreams. Seek mentorship from your mothers and others in the community as you travel your path,” said Lambert, who encouraged the young women to also support their peers.

For the occasion, Abby Sue Pennycook performed a poem she wrote as a tribute to her mother. The touching poem prompted hugs, kisses, applause and cheers. There also were those so moved, they searched for tissue to dry their eyes.

Lankenau’s Principal Joshua Levinson enthusiastically shared his appreciation for being part of the event. “This is my first year participating in the event and it is everything, I was told it would be. The spirt of the event and the cooperation of our staff and students truly represents Lankenau High School,” said Levinson, who assumed the helm of the high school when former principal Karen Dean retired.

Dean, who was in attendance with the own mother, noted why she returned for the annual affair. “The event provides the young women an opportunity to let their moms know they appreciate them and to share time with them. It is a broadening experience for maturing young women.”

Among the students enjoying the day with their mothers were Emani Bell, Doryann Barry and Shynera Dorin, the girls offered several musical selections noting that “it was a special day and they were honored to salute their mothers and guests in song.”

Many of the invited attendees expressed excitement about the event and the opportunity to celebrate what motherhood means,” said Price.

Assessing the overall event, Price said, “The event was enjoyed by all, especially the bonding time between mothers and daughters.” She also acknowledged the school community’s acts of volunteerism and thanked local businesses for their support and donations, which contributed greatly to the tea party’s success.