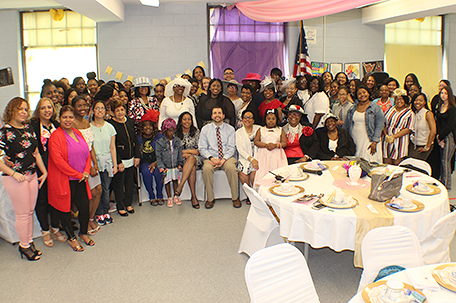 Mixing up a spring holiday routine and treating Mom to something truly unique for Mother’s Day were the characteristics that made the Lankenau Environmental Science High School’s Annual Mother and Daughter Tea a special event.

There is no doubt that mothers always appreciate a thoughtful card or handmade gift, but this elegant event in their honor also made them beam. Being a guest at a “mad” tea party was reminiscent of the one hosted by the Hatter, a fictional character in Lewis Carroll’s “Alice’s Adventures in Wonderland” and its sequel, “Through the Looking-Glass.”

In the story, The Hatter and his tea party friend, the March Hare, are initially referred to as “both mad” by the distinctive Cheshire Cat. Hence, the Mad Hatter, who also was known for his distinctive hat, held tea parties that were legendary for their elegance, atmosphere and foodstuff.

The Mad Hatter would have been proud of the school cafeteria’s transformation. Students converted the setting into an outdoor garden. The tables were set with brightly colored linens, assorted china cups and teapots and sprays of fresh flowers. Guests donned large-brimmed hats, adorned with flowers, bows and ribbons, taking inspiration from the Hatter. The Mad Hatter Millinery Station was a hit, offering a varied selection of hats for those in attendence without one.

As nearly 125 mothers, daughters and guests chatted, they perused the program, which provided proper formal tea etiquette and the dos and don’ts of how to properly drink tea.

The tea’s fare was  traditional, featuring finger sandwiches, tea cakes and scones. It also was complemented with fruit salad and an array of sweet cakes and assorted desserts. However, the tea was the star of the party. Tea choices included floral and fruit flavors such as orange and chamomile, and classic teas like Earl Grey and green tea blends.

“The Tea has become a school tradition,” said Marva Price, program coordinator and a Lankenau support staff member. “It is a wonderful opportunity for our students and [is] also an opportunity to include our community in a special celebration of student life.”

“We’ve enjoyed providing mothers and daughters this special time together, surrounded by family and friends, during the approaching graduation season.” explained Price.

Price noted that the Annual Tea was a team effort, with many Lankenau students, friends and local business owners pitching in to provide food, floral arrangements, china serving platters and their time in the kitchen. While mostly a female affair, some of Lankenau’s male students volunteered as parking lot guides, guest escorts, and DJs. The tea’s servers and wait staff were also student volunteers.

Guest speaker Hill-Holiday saluted the mothers with a tribute for the occasion and offered special words of encouragement to the daughters who were graduating seniors.

“This is a season of change as you embark on a new journey” said Hill-Holiday, who owns and operates nine McDonald’s restaurants in the Philadelphia metropolitan area.

Recalling her early academic and professional journey, Hill-Holiday encouraged the students to study hard and stay focused on their pursuits.

“As a sophomore in college, I studied and worked part-time at a McDonald’s restaurant, never did I dream that part-time job would lead to a rewarding career with the company or result in ownership opportunities for me,” she said.

After outlining the demanding road to her success, Hill-Holiday charged the young women to diligently pursue their goals and to consider adopting her motto: “Work it today and own it tomorrow.”

The message struck its target as the young women and attending underclassmen cheered at the prospect of such a future.

As the program drew to a close, Lankenau’s principal, Joshua Levinson, expressed appreciation to the moms for supporting their daughters and also shared some words of gratitude to the event’s student helpers, staff and faculty that made the event a success.

“The Annual Mother and Daughter tea provides our senior young women the opportunity to honor their mothers,” said Levinson, who admitted the event was one of his school favorites. “We are grateful to the many students that played critical roles behind the scenes to make the event a success.”

The key to the tea party’s success was the bonding of mothers and daughters.

“The uplifting messages offered by program speakers imparted a strong message to our young women. Always remember your mothers will help you overcome any of life’s obstacles,” said Lambert, who also noted the importance of young women trusting their mothers and thanking them for their support.