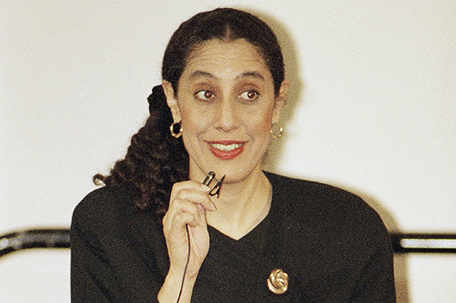 ABOVE PHOTO: Lani Guinier speaks at the annual meeting of the American Society of Newspaper Editors, April 13, 1994, in Washington. Guinier, a pioneering civil rights lawyer and scholar whose nomination by President Bill Clinton to head the Justice Department’s civil rights division was pulled after conservatives labeled her “quota queen,” has died at 71. (AP Photo/Charles Tasnadi, File)

Professor Lani Guinier’s extraordinary professional life as lawyer, author, law professor and change agent has been beautifully documented over the past week.  I want people to know about the less public part of the phenomenal woman, Lani Guinier, the friend.

Early last Friday morning I received a text I had hoped against hope would not be coming so soon.  It said Lani was gone. My friend Lani Guinier had died.  Even though I knew she was transitioning, it didn’t make the reality in that moment any less painful.  As I tried to gather myself, I instinctively started calling our “Village.”

Much has been written about the origins of the proverb, “it takes a village to raise a child” but most agree its roots are in African culture.  Lani’s Village here in Philadelphia was a small group of Black women who shared a lot in common.  For one thing, we were all transplants who ended up in the city, primarily for love and work.  We all were in somewhat unique work environments for Black women, and we were mostly women raising blended families.

Some met Lani through work like Charisse Lillie, who in 1978 was assigned to the Civil Rights Division at the Justice Department as a young lawyer. She recalled that “Lani was an imposing figure — brilliant, confident, powerful and impressive.”

Phoebe Haddon, a colleague-turned-friend, remembered being excited when she first learned Lani was moving to Philadelphia to join the Penn Law School faculty.

“I was at Temple Law School, and there were very few women that were tenure-track faculty in any of the schools in the Philadelphia area,” Haddon said.

Linda Wright Moore and Ione Graves both met Lani through her husband Nolan Bowie who had joined the faculty at Temple University at the School of Media and Communications.   I feel like I “knew” Lani dating back to Harvard.  While we did not actually overlap, we were connected through family.  My older brother Joe was at Harvard with Lani, and her father, Professor Ewart Guinier was the first chair of what was then known as the Department of Afro-American Studies.

In the late 80’s, all six of us reconnected in various ways and then somehow connected to each other in the Village.  Together we took long walks in our Germantown and Mt. Airy neighborhoods, often enthusiastically tackling the world’s biggest issues, as well as our own personal “stuff”.   Each of us were successful Black women negotiating our way through work and life.   All of us grew to love and cherish our friend Lani for her compassion, generosity, friendship and as Ione reminded us, her “wicked sense of humor!”

Lani was the first in our Village to give birth to a son, Nikolas, who we called Niko.  In working on a recent tribute,” Remembering My Friend Lani Guinier” (fierccceforblackwomen.com) Linda remembers getting the call from Nolan to say Lani was in labor, “… she (Lani) took the line and declared, “Linda, I do NOT recommend this!”

Ione remembers being entrusted with keeping Niko very early on.

“…Niko was a toddler then and for some reason we really hit it off,” she said. I “baby sat (although he was an old soul in a small frame).” Charisse was next to have a daughter, Alison, followed by Phoebe’s daughter Cara and shortly thereafter my son Joey was born.

Lani insisted I use her ob-gyn at Jefferson, which I did. She also completely outfitted me with beautiful maternity work clothes. Throughout my entire pregnancy, I bought very little because as I grew, Lani delivered the perfect sized outfits.   I have very vivid memories of my baby shower hosted by Linda at her home in East Mt. Airy.

I was wearing one of Lani’s outfits and most of our soon-to-be Village attended. Linda’s daughter Mariah would come a few years later and as we do, our Village was there.

We continued to support one another in every way, large and small.  Whether it was pickups from preschool, overnights, dropping off food or the very organized recycling of the children’s clothing, we supported each other.  No questions asked.

There were group gatherings for birthdays, holidays, special occasions and often just because.

In particular, because of our shared values about raising strong Black children, we decided to embrace Kwanzaa as our big multi-generational holiday.  Lani and Nolan hosted our first Kwanzaa celebration in their home in Germantown.  Our children —along with grandparents, aunts, uncles and friends — crowded around Lani’s mother’s Genie on the piano playing “Lift Every Voice.”

Ironically, or maybe not, years later “Lift Every Voice” was the title of Lani’s 1998 memoir telling the full story of Bill Clinton’s refusal to put her nomination for the assistant attorney general for civil rights forward.

At our inaugural Kwanzaa celebration, we lit the first candle in the kinara symbolizing the principle of Umoja (Unity).  We truly enjoyed our renewed sense of Black pride.  Our toddlers on the other hand, seemed to be oblivious, happy just to be together and running around like crazy. Thus began our observance of Kwanzaa that grew every year.

Many of us also shared good times together in Martha’s Vineyard.  Lani’s parents were among the first Black families to own a home in the area known as East Chop.  Each summer we looked forward to spending time together, enjoying the beautiful beaches, walking and doing yoga at the Barn.  Even if Lani wasn’t on the island, we would always spend time with Mrs. Guinier on Winemack Street, enjoying her stories about their early life on the Island.  Our Vineyard times together became that much more treasured once Lani, Nolan and Niko moved to Cambridge, Massachusetts, where she became the first Black woman to receive tenure at Harvard Law School.

Lani’s exceptional career has been deservedly chronicled in the last several days.  For me, it is important to share that as extraordinary and accomplished Lani became, nothing ever changed in our Village. Over the years, even as we all enjoyed our own professional successes, when we got together, we were that same group of best girlfriends who spent countless hours walking at the Penn Charter track.

I guess that’s the measure of true friendship.   Your individual path may take you in a very different direction, but the love and respect for one another keeps you together.

I can’t remember exactly when I learned about Lani’s diagnosis of Alzheimers.  As we had for decades, in good and not so good times, our Village was there like a safe harbor.

One of the more memorable times we were together in later years was at Niko’s wedding in September 2016 in Martha’s Vineyard.  Just as we had done for so many other special occasions we gathered, this time at Phoebe’s home, which at the time was a few houses away from the Guiniers. We drank champagne and told old stories while we got into hair and makeup for the wedding.   It was just like old times — the house was filled with laughter and love.  Lani looked beautiful and was full of pride and excitement.  The wedding was perfect and we all took to the dance floor at the reception. Lani loved to dance!

As the festivities went on, she was getting tired and I remember Phoebe and I gathering up her things to go home.  As we were trying to make a quiet exit so as not to interrupt the party, someone touched my arm.  To my surprise, it was Supreme Court Justice Sonia Sotomayor, who officiated at the wedding.  She leaned in and said, “you are good friends.”

For our Village — Charisse, Phoebe, Ione and Linda — the loss of our good friend Lani is immeasurable.  Phoebe put it best, saying, “(our) conversations were rich and an opportunity that was not not often available to women like us.” It was true in the late 80s when we first came together as like-minded friends and sadly, it is still true today.

Lani will be greatly missed in our Village, because while she was devoted to the pursuit of justice and equality, she was also truly a devoted friend.

Reagan was no friend of Blacks

My boss, my brother, my friend