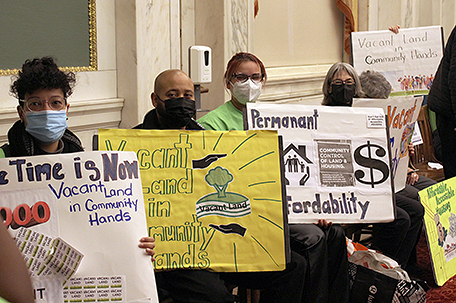 ABOVE PHOTO: Some of the members of the Philadelphia Coalition for Affordable Communities who gathered last Thursday in support of the legislation. (Photos/PCAC)

This is a major victory for Philadelphia’s growing communities in need of affordable, accessible housing.

“I am proud to take this important step with Majority Leader Jones for community-controlled, permanently affordable housing and urban gardens in the 3rd and 4th Districts,” Gauthier said. “The City’s unused land is our best resource to bring assets to our communities that the private market will not generate on its own. This bill will help to do that by addressing Philadelphia’s urgent need for community-owned and operated affordable and accessible housing, healthful gardens, and open spaces in Black and brown communities.”

Councilmember Gauthier first introduced this legislation in December 2021 and the bill was co-sponsored by Councilmembers-at-Large Kendra Brooks and Derek Green. The goal was to ensure long-time Philadelphia residents aren’t continuously priced out of their neighborhoods and much-needed community green spaces have room to — literally and figuratively — grow for future generations.

A hearing was held for the legislation in June 2022 where supporters urged councilmembers to support the facilitation of City-owned land transfer to development projects that will aid Philadelphia’s communities in need.

“City Council underscored the importance of putting opportunity in the hands of organizations that advocate for Philadelphians this morning by passing the Land Justice Legislation. Members of the Philadelphia Coalition for Affordable Communities showed up in full force to celebrate this important moment,” said Nora Lichtashm, executive director of the Women’s Community Revitalization project. “Our coalition wants to thank Councilmember Gauthier for championing this bill and Councilmembers Brooks and Green for their sponsorship of the legislation.”

Half of all renters and more than one in three homeowners in Philadelphia are housing cost burdened. Almost one out of every five city residents lives in households that do not have enough to eat over the course of a year. In Philadelphia’s poorest neighborhoods, rising housing and land costs are displacing huge percentages of residents, and community gardens are quickly being lost to market rate development.

To learn more about the land justice legislation, visit: www.phila.legistar.com. If you’re interested in getting involved with the Philadelphia Coalition for Affordable Communities, visit:  www.PhillyAffordableCommunities.org.