Ladies who lunch—power of laughter draws a crowd 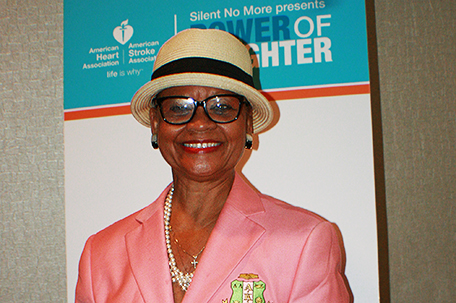 Hundreds gathered at the First District Plaza The Philadelphia branch of the American Heart Association’s recent Power of Laughter Health Conference, making it a huge success.

There were numerous vendors in the lobby and conference room and a healthy food demonstration by chef Delilah Winder.  She instructed women how to make a tasty chicken dish as well as a how-to search for the right produce and a low sodium recipe booklet.  The National Association of Hispanic Nurses was also on site to provide CPR lessons. 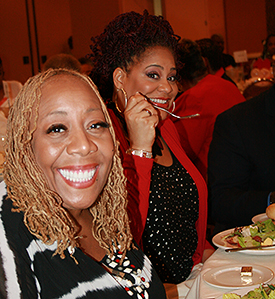 “Salt” also snuck up on unsuspecting attendees, who then took pictures with her and shared them on social media using the hashtag #LaughterPHL. Coles engaged the crowd in an activity that required them to switch to their non-dominant hand while eating to simulate the difficulty stroke survivors go through.  She also gave some factoids on the average sodium an American consumes in one day of 3500mg compared to the recommended dietary value of 1500mg and said that 9 out of 10 Americans consume too much sodium which can lead down a dangerous road of a slew of health problems, increasing the risk of heart disease and stroke.

Keynote speaker Mrs. Shavon Arline-Bradley offered a galvanizing speech titled “Done with Dis-ease.”  She excited the crowd using funny and relatable anecdotes and serious asides describing civil rights and racism that pile on the stresses and strains faced by African Americans.  “You’re talking about heart disease and stroke, try being black in America for one minute.  No wonder we have these issues.”  Her speech was awarded with a standing ovation and thunderous applause as she reminded us to define our own self worth before someone else does.

Rev. Dr. Lorina Marshall-Blake was awarded the Most Powerful Volunteer Award and gave us her own dose of comedic relief as she accepted her award.  Stroke survivor Maribel Aviles Bazar spoke of her terrifying episode and further explained the importance of taking proper medication and limiting sodium consumption.

WDAS-FM’s Patty Jackson was on hand to introduce the emcee, and left us all with a reminder that as caretakers we often forget to take proper care of ourselves.

Simple ideas to makeover a lunch in just minutes