Ladies and Gentlemen, Your New School Board 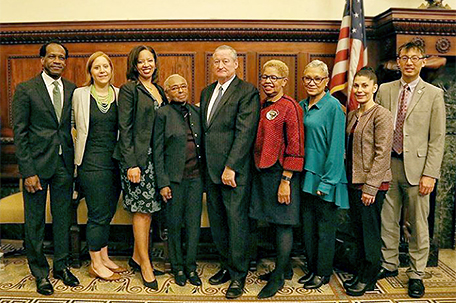 On Wednesday, Mayor Jim Kenney introduced the city to the group of nine people who will be running the school district from now on.

When the School Reform Commission voted to dissolve itself in November, the question on everyone’s mind was who would be overseeing the School District of Philadelphia once the SRC’s term ended in June.

At a press conference in the Mayor’s Conversation Hall on Wednesday, Mayor Jim Kenney unveiled the first local school board to oversee the district since 2003.

With a wide range of experiences ranging from education to pediatric medicine to social work to fiscal management, this group of men and women is more than up to the challenge of making the School District of Philadelphia the best it can be, Kenney said.

“These nine appointees share a vital passion for quality education for all Philadelphia’s children,” he said. “Their different backgrounds and perspectives will guide them well as they make decisions that will ensure a better future for public education in Philadelphia.”

They’ll be making these decisions with William Hite, the district’s superintendent. He’s looking forward to the new challenge, he said.

“I’m excited and I’m looking forward to working with you to make sure that our children have access to a quality education,” he said, looking at the new board.

Two of the members of the new board —Wilkerson and McGinley— resigned from the SRC last week to take the new positions.

Because the SRC had only five members, there wasn’t much of a chance for the group to be as hands-on as possible because there were fewer committees, Wilkerson said.

But now that the board will have nine people on it, they’ll be more chances to do deep dives into issues, something that will make it easier for the board to meet the challenge of maintaining the gains the district and its children have made, Wilkerson said.

Now that the new board has been selected, it will undergo training in preparation for the duties it will assume in July. It will also go on a listening tour of the district to hear from parents, students and other interested parties about what they’d like to see from the new district.

Here is a list of listening tour dates and times:

Mayor Kenney Announces Appointees to New Philadelphia Board of Education