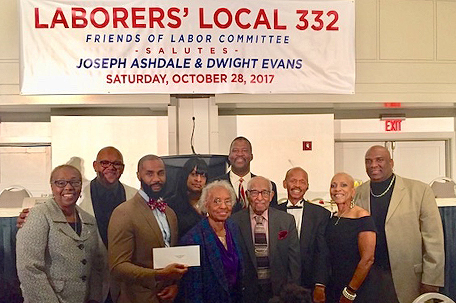 ABOVE PHOTO: Knoxville College alumni (142 years of service as one of the oldest HBCU) Friends of Labor scholarship recipients. (Photo courtesy: LECET)

The Friends of Labor Committee of Laborers’ Local 332 held its 31st Annual Charity Dinner last weekend. The event is an opportunity to recognize those that perform outstanding and meaningful community service and exceptional service to the labor industry.

The event, according to Toni Staten, LCD Executive Director of LECET, was the brain-child of the late labor leader Sam Staten Sr., who was a considered a giant in the Philadelphia labor movement for more than 50 years, having risen through the ranks of Laborers’ Local 332

“It was important to him [Staten] to help the union members and to address those issues of concern to them,” she said. “Assisting them to educate their children and helping them to address the social concerns impacting them and their families were necessary.” 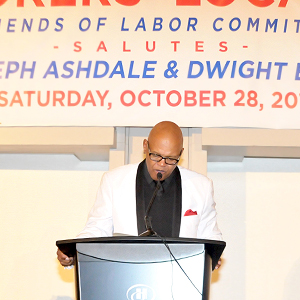 A number of prominent political figures including Pennsylvania’s Governor Tom Wolf, Philadelphia Mayor Jim Kenney, and Congressman Robert Brady, State Representative Jordan Harris, State Senator Vincent Hughes and many others were in attendance at the event, which was held at the Hilton Hotel at Penn’s Landing on Saturday, October 28, 2017.

The recipients of the Community Leader award, according to Staten are those persons who have made great contributions to their communities at large and to the advancement of labor. Staten pointed to the revitalization of the Philadelphia’s Oak Lane section during the past 25 years, while under the stewardship of now Congressman Evans and then Pennsylvania State Representative. “The revitalization of a once declining neighborhood, has advanced with a proliferation of business opportunities, shopping centers, housing and educational opportunities,” said Staten.

State explained in the category of “Labor Leader,” that This person is always a member of the building trades, whose performance demonstrates that he or she has given of himself or herself for the benefit of the membership.”

This year, Joseph Ashdale, business manager/secretary-treasurer of the Painters & Allied Trades D.C. #21 was awarded the Labor Man of the Year Award, because according to Toni Staten “he demonstrated to his members through his performance in such areas of collective bargaining and meeting their daily concerns, that they come first.”

In the category of scholarship recipient, Laborers’ 332 mission is to provide assistance to organizations for the purpose of advancing their programmatic thrusts.

The gala event was a huge success ,thanks to an active year of fundraising which, included members of Laborers’ Local 332, led by Sam Staten Jr., sponsors and friends, all who helped raise thousands of dollars for the various non-profit organizations.

“A Tribute to Samuel Staten, Sr.” raises over $200K for charity