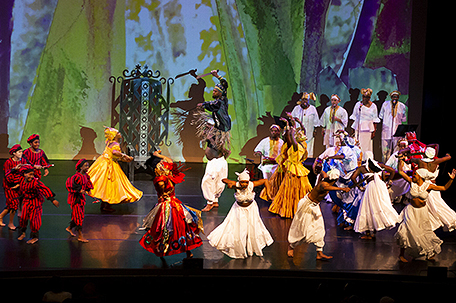 Founded in 1969 by legendary drummer Baba Robert “Ibikunle” Crowder (1930-2012), the dynamic ensemble is the oldest continually-performing African dance and drum ensemble in the nation.

Under Crowder’s expert tutelage, the ensemble became a major part of the foundation of Philadelphia’s Black Arts Movement of the 1960s and 1970, helped give birth to a cultural renaissance in Philadelphia’s African American communities and attracted those who were eager to study and experience African culture through the performing arts. Scores of dancers and drummers were trained by Crowder at his longtime headquarters in West Philadelphia’s Lee Cultural Center.

The limited edition book allows readers to experience the history of Kùlú Mèlé and its role in Philadelphia’s Black Arts Movement. The book also documents the ensemble’s historic visit to Santiago, Cuba to study dance, music and Yoruba spiritual traditions with world-renowned Ballet Folklorico Cutumba in preparation for the full-length production of the world premiere of their new spellbinding production, “Ogun & the People — An ancient story with lessons for today’s world,” which  was presented to sold-out audiences at the Annenberg Center for the Performing Arts in November.

The history is told in three parts: The first story in the book is the history of the evolution of the ensemble and how it embraced African and African Diaspora dance, drum, and folkloric traditions told through the words of Kùlú Mèlé artistic director Dorothy “Mama Dottie” Wilkie and music director Baba John Wilkie — partners in culture and life for nearly 60 years, who have been with the ensemble since 1971 and dedicated their lives to preserving the culture. Their story expresses the collective self-determination, the long-haul persistence and labors of love that sustained and empowered Kùlú Mèlé as the foundation of a deep cultural movement.

The Kùlú Mèlé story begins with Crowder’s transformative journey into the world of music from playing wooden cheese boxes as a child, his immersion into Cuban, Haitian, Brazilian and African music circles and traditions, performing African dance and drumming with the highly influential Ghanaian drummer Saka Acquaye in the 1950s, playing with jazz artists McCoy Tyner and John Coltrane, being the one of first African American drummers in Philadelphia to study batá drumming and sacred Orisa music, to the founding of Kùlú Mèlé in 1969.

The book includes interviews with  Baba Crowder before his transition in 2012. In this excerpt  he recalls meeting Kwame Nkrumah, president of Ghana who matriculated at Lincoln University, in North Philadelphia:

“These were heady times, Baba recalled, “In 1959 or 1960 there was a street festival for Ghana’s Prime Minister Kwame Nkrumah at Broad and Diamond, when he went back to Ghana to take over. Kwame Nkrumah talked about his pride in African Americans — especially me, Saka and Garvin Masseaux. He said that he was very proud of Saka for enlightening the African American. When he spoke about freedom and awareness, everyone knew that day what the drums were saying. African Americans should come into awareness and go into their culture. Prime Minister Kwame Nkrumah said that Africa to us is at the pit of our navel because we were snatched from Africa. But the child will return: Omowale.”

“Dorothy and John Wilkie are the living definition of “Commitment to the Culture,” said Vena Jefferson, dancer, storyteller and teacher.

The ensemble also produced a coloring book for all ages entitled, “The Story of Ogun & the People,” illustrated by artist Damali Beatty, based on photographs of Kùlú Mèlé’s trip to Cuba.

The second story in the book is the experiences of the ensemble’s members during the weeklong cultural immersion residency with Ballet Folklórico Cutumba in Santiago, Cuba.

The third story is community members’ reflections on the significance of Kùlú Mèlé’s historic cultural contributions. You’ll be surprised at the people who are connected to  the organization’s history.

Don’t miss the opportunity to experience some of Philly’s cultural history by reading the book and celebrating one of the nation’s cultural treasures! This history should be a part of every culturally-conscious Philadelphian’s library and available for future generations.