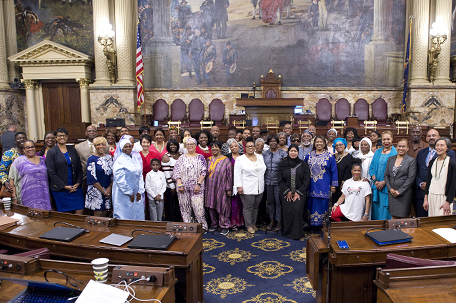 HARRISBURG – The Pennsylvania House of Representatives unanimously adopted a resolution (H.R. 871) introduced by Rep. Stephen Kinsey and co-sponsored by Rep. Vanessa Brown, both D-Phila., which recognizes today as Juneteenth Independence Day in Pennsylvania.

“Juneteenth celebrates the heritage, family and community spirit of African culture. We commemorate this day to the freedom of the millions of Africans who survived their harrowing journey, and to the continued education and achievement of African-Americans today,” Kinsey said. “It is also an opportunity for everyone – as individuals, as institutions – to recommit to liberty, justice and equality, so we can move our nation forward, providing opportunities and promoting success for all.” 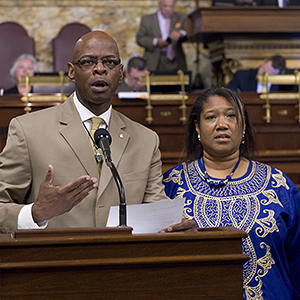 On June 19, 1865, troops under the command of Major Gen. Gordon Granger arrived in Galveston, Texas and in addition to announcing the end of the Civil War, issued General Order No. 3 proclaiming all slaves to be free, including absolute equality in personal rights.

Although President Abraham Lincoln had issued the Emancipation Proclamation two years earlier on Jan. 1, 1863, the news had not reached Texas and other southwestern states until this day. The event kick-started a 140-year-old “Juneteenth” tradition that today recognizes both the freedom of slaves and the endurance of African culture in North America.

Juneteenth Independence Day is recognized as the oldest African-American holiday observance in the United States.

The House also is considering H.B. 2488, sponsored by Rep. Susan Helm, (R-Dauphin/Lebanon), and co-sponsored by Kinsey, which would permanently establish the annual observance of “Juneteenth National Freedom Day” in Pennsylvania. The bill was approved by the House Urban Affairs Committee on Tuesday, June 19th and is expected to be voted on by the full House next week.

Kinsey said: “We’ve been pushing to make Juneteenth a permanent celebration in the commonwealth for several years. I’m thankful for the bipartisan support for this bill during the 2017-18 legislative session.”