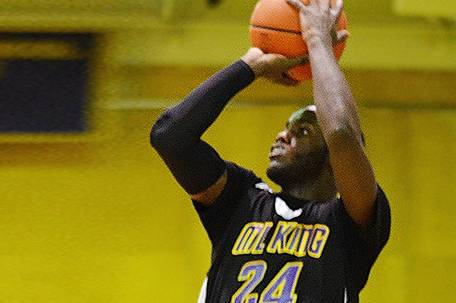 There has been a buzz growing around the city about the strange success of Martin Luther King High School basketball. They haven’t just been good this season. They have played great on their way to posting a 17-4 record and finishing 3rd place in the stacked Public League A division.

Why is it an anomaly for this team that went 24-5 last season to be even more equipped this season? Why is their success so intriguing albeit they fell just two games shy of a Public League championship a season ago? Why is it viewed as groundbreaking for MLK, who fell a few baskets shy of downing eventual title winner Lower Merion in the AAAA state tournament, to come back this season playing better than ever?

For a program that has a history of breezing through the competition and being viewed as a perennial powerhouse, such good fortune would be expected.

But for Martin Luther King High School, a team that hasn’t scratched the surface of basketball relevance since ’03,’ such prosperity on the hardwood is appalling to say the least.

The shining question posed by spectators is, ‘how did this team get so good almost out of nowhere?’

Well, there are a few reasons.

Their second-year head coach Sean Colson is a product of North Philadelphia who has played in some of the top professional leagues in Europe and appeared in a few games in the NBA with both the Houston Rockets and Atlanta Hawks. His basketball pedigree and experience has influenced some of the area’s most coveted prospects to want to attend the school.

“Kids know me from playing overseas and in the NBA and having success, but then when I returned home in 2010 I became a trainer and worked out a lot of really talented players,” second-year head coach Sean Colson said about being able to establish relationships with players and pull them into joining the new-look Cougars.

The laundry list of player transfers and talented personnel changes has made the largely undermined Cougars into a fierce competitor in the Public League.

“I trained a lot of good players like Khalif Wyatt and Amile Jefferson and people noticed the improvements in their games. People saw me as both a good coach and a trainer, so now they want to come to Martin Luther King.”

Aside from his duties as a trainer and head coach of Martin Luther King, Colson also coaches AAU basketball for Philly Pride.

The familiarity that he has with players in that circuit has helped Colson attract players to his program, including junior guard transfer Sam Foreman.

“It’s been fun. We got some good guys that I knew from Philly Pride and before that. I also wanted to come here so that I could beat the Imhoteps and the MCS’s and go up against guys like Samir Doughty and Mike Watkins. I’ve wanted to beat Imhotep since I was a kid and I knew that Coach Sean would get where I wanted to be,” Foreman said.

Foreman leads the team in scoring this year as he averages 14.3 points per game. MLK is his third school in three years as he previously attended Haverford School during his freshman year and Robert Vaux Academy last season.

Vaux’s closing after last school year left with the Foreman to join Colson and company. He chose King for the opportunity to join players that he was familiar with and a coach that would give him a chance to compete against the best teams in the city.

“It’s been easier because he’s a great coach who knows a lot about basketball,” Foreman added.

Foreman is closing in on 1,000 points for his career. Such a feat hasn’t been done by a King player since Andrew Hummond in ’00.’

The flurry of public charter schools that have opened over the past decade has often lured a lot of the city’s top basketball talent. The added programs have dominated their competition as they have accounted for seven straight Public League Championships, four of which being won by the aforementioned league rival Imhotep Charter.

Former Imhotep players senior Greg Bennett and sophomore Rasool Samir are among other notable transfers that have relished the opportunity to play under Colson.

“He’s been very good for me and has really helped me out a lot on my game,” said Bennett who looks to play collegiately following this season.

Bennett is second on the team in scoring as he averages 11.7 ppg.

“We’ve been doing really good we just want to continue that and hopefully win a Public League and a State Championship too,” he added.

The younger Samir is a future Division-1 prospect that has contributed well off the bench for the Cougars. Samir in addition to all the players on their roster knowing their roles has been instrumental to their stellar play over that past few seasons.

“Play defense and rebound, that’s what I do,” Samir said.

“I play AAU with most of the guys here. I get along with everybody and everybody gets along with me. So it’s great.

In recent memory, when you thought of King you probably never thought of basketball. But with the continued success of Colson and his cast of hard-nose hoop stars, the word “basketball” is starting to become the first thing that comes to mind.