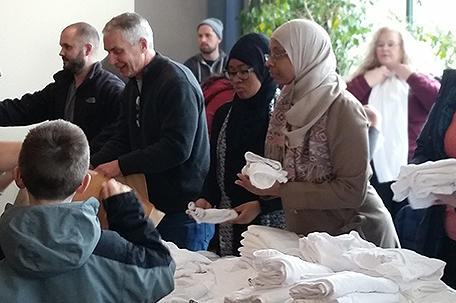 “I have the audacity to believe that peoples everywhere can have three meals a day for their bodies, education and culture for their minds, and dignity, equality and freedom for their spirits.”

The Mennonite Central Committee (MCC) and Circle of Hope Church joined forces Monday to lead a large group of volunteers who assembled an estimated 150 MCC personal care kits for those incarcerated at the Philadelphia Detention Center.

The contents of the kits must be pre-approved and of a certain size due to restrictions on what is allowed to be brought into the facility.

Because of the nature of prison life — where fights over everyday items are common, and in which even basic items like toothpaste become a currency that is often exchanged for sexual favors and other humiliating acts —  the care kits are directly connected to helping inmates maintain a sense of sanity, self- respect and dignity.

The service project volunteer group — which was comprised of people of all walks of life also heard from a panel of community leaders and formerly incarcerated individuals who shared their stories and discussed the role of race, poverty and the law in mass incarceration, among other topics.

One asked the panelists about their views regarding the so-called “school-to-prison pipeline.

“When I was in Kilby Correctional Facility, which is the intake prison down in Alabama, one of my jobs was working for classification,” said Dave Garlock, 38, house director of New Prison Ministries in Lancaster, Pennsylvania. “So, we would classify the inmates for to what prisons they were going to go to.  I worked in this position for nine months. I saw about 10 different people that were 16 years old. Their charges ranged from 20 years to life sentence.”

Garlock addressed the young volunteers in the room directly.

“Those of you who are in here who are 16, could you imagine going to an adult prison for the rest of your life? That’s the thing; they weren’t cognitively developed. They say that you are 25 years old when you have your cognitive development finished. So here they are, nine years away from that,” he said.

The panelists also touched upon decarceration and rehabilitation and the challenges of both. They emphasized that a holistic approach taking into consideration individual needs like mental health services, job opportunities, housing assistance and counseling were crucial in combating recidivism.

When asked about maintaining hope and dignity in prison and after release, the panelists were reflective. They identified education, peer mentoring, maintaining a strong spiritual practice and becoming role models when they find success after incarceration as being essential to the process.

“If you’re doing ministry in the hood, you’re going to have to plant seeds — don’t try to use other people’s strategies to help your community,” said Ronald Muse, a chaplain at the Philadelphia Detention Center who served 13 months for dealing drugs in his youth. When he and others started the Christ Centered Church in the Fairhill section of the city, they were confronted with guys on the corner selling drugs.

“Outsiders would say ‘we’ve got to get them off the corner, and make sure that they don’t sell drugs on this corner.’[ I responded] ‘Pump your brakes – because that’s not my job. My job is to show love,’” Muse said.

“So when I walk up to them, and they see us, first of all, they understand, because we was out there before…I know what it’s like to be out there hustling,” Muse continued. He explained how he broke the ice by offering the dealers a meal. Eventually, it began to pay off, and the street corner business began to shift slowly, but not before many wound up incarcerated at the Philadelphia Detention Center.

Because of the trust and relationship Muse had established with them previously, he was able to mentor and help them during their time there.

Personal care kits like those which volunteers assembled at Monday’s service event make a huge difference in a prisoner’s life. Muse — along with Juan Marrero, another pastor at Christ Centered Church and executive director of Crossroads Community Center, helped bring the program to the county prison system along with MCC and The Kingdom Builder’s Anabaptist Network of Greater Philadelphia.

“You know what that care package is? Love…we have to learn how to do things differently than how the status quo does them,” Muse said.

Shawn Baker, 45 — who was released last November after serving an eight-year sentence —  now works as a certified peer specialist.

Baker is an active volunteer with Sisters Returning Home, a nonprofit organization in Northwest Philadelphia that helps women who are returning home re-establish connections with their families and community through comprehensive program services.

She also works with I’m Free( Females Reentering Empowering Each Other), another organization that also helps women who are transitioning back into the community after being incarcerated.

Both organizations provide their own version of personal care kits that include these essential items young women need during their monthly periods, she said.

Garlock — who along with his brother served time for murdering the individual who physically and sexually abused them(he was released after serving 13 1/2 years of a 25-year sentence) — added that it is equally important to support those who are reentering society after completing their prison sentences.

When it comes to a successful re-entry experience, something as simple as the key control in a business or organization — entrusting people with important keys and access information — also goes a long way in building self-esteem and hope for someone who might have never experienced these things in a meaningful way.

“I was part of a church that was in the inner city for 10 years, but they didn’t trust me to do anything but be an usher,” Muse said. “So what happened is that one of the members gave me keys to use the facility. The leadership came and took my key — and I was part of the church.

So I said to myself ‘when I get to the place I need to be, no matter what, they will not have a keyless ministry.’ Keys are a sign of authority. When we give them keys, we’re letting them know ‘we trust in you, and we believe in you.’”

Allowing those who were once incarcerated to carry keys to his church also has a direct effect regarding recidivism, Muse believes.

Dr. King’s legacy means different things to different people — especially to those who were too young to remember or were born after he was assassinated 50 years ago on April 4, 1968.

King was 39 at the time of his death, very close to the age of many of Monday’s participants.

“King’s prophetic voice spoke to the injustices he’d seen, not from just a secular point of view, but from a point of view of our God-given rights,” Muse said. “When that comes into play, that helps me out as a believer to make sure that I’m giving that word out correctly.”

“I think the Lord used him[King] as a prophet to the nation to challenge the racism and oppression that took place in this country,” said Marrero. “I believe the dream is still alive, but there’s a whole lot more work to be done.”

Devron Washington, 29, works with the Philadelphia Community Bail Fund, a nonprofit organization that posts bail for those who cannot afford it. The organization also works to expose the inequities of the use of cash bail and advocates for the abolition of bail and pretrial detention in the city.

As a millennial, he has his own unique ideas about what Dr. King’s legacy means in the 21st century.

“I personally would like for there to be more education around who Dr. King was, especially in his later years, how he looked at changing his tactics and changing who his message was tailored for in order for him to achieve that dream that he had,” Washington said. “I’m really hopeful, because we have the internet, and we have catalogs of his speeches. You can go on youtube and access every speech that he had taped.

The millennial generation — for all of the flack that we get — is a lot more connected to the information that’s out there. I think that’s why people look at us as being idealistic, because we have the receipts for what was said, and we like to hold people to it.”