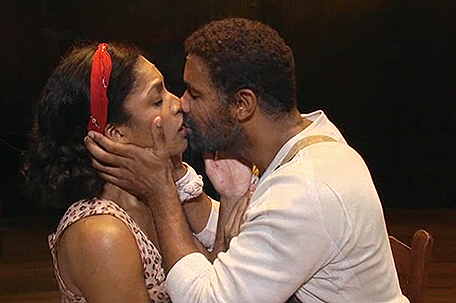 Throughout the year Kimmel Center celebrates Philadelphia’s diverse artistic traditions. In February, we commemorate Black History Month with a focus on African-American arts and culture through the lenses of musical theater and jazz.  This month’s highlights include eight performances of “Gershwin’s Porgy and Bess” and three free jazz events.

“The Gershwins’ Porgy and Bess” debuts February 19-25 on the Kimmel Center campus at The Academy of Music. Set in Charleston’s fabled Catfish Row, beautiful Bess struggles to break free from her scandalous past, and the only one who can rescue her is the courageous Porgy. Threatened by her formidable former lover Crown, and the seductive enticements of the colorful troublemaker Sporting Life, Porgy and Bess’ relationship evolves into a deep romance that triumphs as one of theater’s most exhilarating love stories. Tickets now on sale!

Tickets are available at kimmelcenter.org, 215-893-1999, or at the Kimmel Center Box Office located on Broad and Spruce streets, Philadelphia, Pa. (open daily from 10 AM to 6 PM, later on performance evenings).

“Porgy and Bess” originally began its journey to the Broadway stage in 1936, when George Gershwin wrote a letter to African-American poet DuBose Heyward, author of the novel Porgy, proposing that the two of them collaborate on an operatic adaptation. Heyward agreed to Gershwin’s proposal, but commitments in New York prevented Gershwin from beginning work on the project for another seven years. Over the course of more than two years beginning in the spring of 1933, DuBose Heyward and the two Gershwins—George’s brother, Ira, joined on as co-lyricist in 1934—collaborated mostly by U.S. Mail, with only occasional face-to-face meetings. In this fashion, they managed to create some of the greatest songs in American musical-theater history, including “Summertime,” “I Got Plenty O’ Nuttin’,” “It Ain’t Necessarily So” and “Bess, You Is My Woman Now.” The Gershwin-Heyward collaboration featured an all-African American cast of classically trained singers—revolutionary casting in 1930s America.

Jazz is an American art form that originated within African-American Southern communities in the United States.  Today, jazz is performed worldwide and continues to be America’s classical art form. Kimmel Center continues its rich jazz tradition with three free jazz performances to celebrate Black History Month including:  Laurin Talese featured artist of Sittin’ In Jam Session (February 12 at 8 p.m.), a new jazz residency workshop featuring Josh Lawrence and The Fresh Cut Orchestra  (February 27 at 6 p.m.), and PNC Grow Up Great, All Aboard the Jazz Train (March 8 at 11 a.m).

The Gershwins’ Porgy and Bess | Academy of Music

See what Time Magazine exclaims is, “A don’t miss theatre event! The #1 Broadway musical of the year.” Winner of the 2012 Tony Award for Best Revival of a Musical, The Gershwins’ Porgy and Bess is hitting the road with award-winning members of the Broadway cast in this stunning and stirring new staging. This re-envisioned Broadway production is accompanied by a lush 23-piece orchestra.

As part of the new jazz residency program in SEI Innovation Studio, Josh Lawrence and The Fresh Cut Orchestra are composing an extended work Yin & Yang of Life, fusing traditional acoustic and modern electronic music.  Their workshop on February 27 provides audiences with the opportunity to engage in the creation process of a new work, hearing more about the collaborative process in the development of the piece  Collaborating Artists include Josh Lawrence and the Fresh Cut Orchestra working with Jason Fraticelli (Composer and bass), Anwar Marshall (Composer and drums), and Tim Conley (Composer, Guitar, Laptop).

Free at the Kimmel | All Aboard the Jazz Train

Kids and parents, get ready to board the Jazz Express! Together with our partners at the Temple University Music Preparatory Division, we’ve curated an exciting morning full of jazz and live performance that little arts-lovers will ADORE. In this interactive concert, children and families will be introduced to the amazing world of jazz music and encouraged to sing, scat, and groove along with the band. All Aboard!