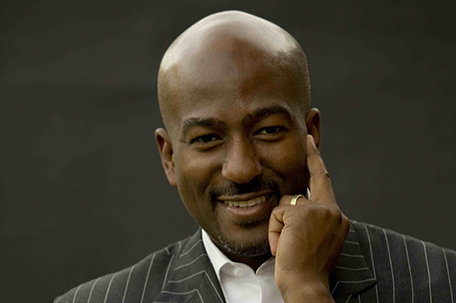 OIC was was founded 50 years ago by Leon Sullivan and is one of the region’s oldest job training programs, . Recognizing that blacks needed skills to fill the jobs that were becoming available to them, Sullivan leased an abandoned North Philadelphia jailhouse from the city and started the OIC.

As the fifth president of the OIC, Johnson’s plans for the organization are as innovative as Sullivan’s. “We want to bring the vision of the OIC to the 21st century,”, he said. Prior to this position, Johnson served for seven years as the senior pastor of Bright Hope Baptist Church, before resigning last year.

“Dr. Sullivan wanted to help people help themselves, and that is what we want to do in the 21st century,” Johnson said. Up to this point, the OIC has been primarily focused on the culinary arts and hospitality, and we will continue in those areas, but we also want to get into technology and partner with the business community to spur entrepreneurialism.”

Johnson discussed model cities like Austin, Texas and Boston, which are becoming the new prime destinations for technology start-ups with the help of innovative leaders and incubators.

“Philadelphia has always been on the cutting edge, and we want to help work to maintain that. We’d like to work to build partnerships with large technology organizations like Comcast, and with Temple University to move our vision forward,” Johnson said.

Comcast is currently developing a $1.6 billion, 59-story, Innovation and Technology Center in Center City. The building, when completed will become the home for the company’s technologists, engineers, and software architects.  The facility will also create a media center in the heart of the City, relocating the operations of local broadcast television stations NBC 10/WCAU and Telemundo 62/WWSI and offer space for local technology startups.

“We don’t just want to train people for jobs, but we also want to work with organizations in the city to create jobs, especially for those who are under-employed”, said Johnson.

His focus on jobs for the underemployed is significant. In November 2014, the city’s unemployment rate was about 6.7 percent. That means about 42,700 individuals were unemployed in November 2014. But there are thousands of people living in the city who are the working poor. Those folks working in positions with pay at or below the living wage. The poverty rate in some sections of North Philadelphia according to a 2013 Pew Study, are as high as 49 percent. Many of these people do not lack education, in fact, some hold college degrees.

Johnson said the OIC’s building on North Broad Street provides the perfect space required for his vision of creating an entrepreneurialism and technology hub.

“The most important thing is to create jobs, but to do that, you need to have an educated workforce, and that starts with our schools,” he said. “That is why we have an after-school program. If we don’t have a good foundation in education, we can’t compete for jobs”, he said. “We also want to encourage our youth to consider starting their own businesses, explore their talents. Our building houses two charter school programs. Having the opportunity to interact with these students reminds me that our youth have promising futures.”

Johnson said the with the help of the center’s Board of Directors, he believes they will achieve Sullivan’s vision. And although Johnson plans to expand the services the OIC provides, he does not intend to change the organization’s mission.

“The OIC’s future is bright. We have a dynamic board and a great staff. I am extremely humbled and honored to build on the legacy and continue in the vision of Dr. Sullivan.”