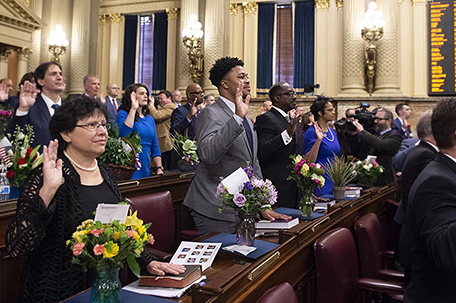 ABOVE PHOTO: State Rep. Malcolm Kenyatta was sworn-in for his first term on Jan. 1, 2019. Family and friends joined him in the House Chamber prior to and during the ceremony.

HARRISBURG – In the presence of family and friends, State Rep. Malcolm Kenyatta took the oath of office, beginning his first term in the Pennsylvania House of Representatives, where he will represent the 181st Legislative District. He was also recently elected vice-chairman of the Philadelphia County Delegation.

Kenyatta, a 28-year-old native of the North Philadelphia community that makes up part of his district, is a 2012 graduate of Temple University. He is the first openly LGBTQ person of color to be elected to the General Assembly.

Before being elected, Kenyatta led the Diversity & Inclusion Initiatives for the Chamber of Commerce for Greater Philadelphia. He also worked in Graduate Medical Education at Hahnemann Hospital and in food service for a number of years. In addition, Kenyatta served as the campaign manager for a Philadelphia City Council candidate and served on the board of Equality Pennsylvania.

“I am proud to be a part of history and to represent the community where I was born, raised and received my degree. I’m forever grateful to my constituents for allowing me to be their voice in Harrisburg,” Kenyatta said. “Becoming a state representative is a victory for North Philadelphia and for anyone who feels left out or left behind. We need to deal with the moral and economic crisis of poverty, fully and fairly fund schools, raise the minimum wage and provide a better quality of life for all Pennsylvanians.”

“We have children in schools with asbestos falling from the ceilings and lead in their water. There are young people and adults living with breathing issues because of the pollutants in the air. We are seeing families and seniors being evicted from their homes without any warning. It is time for us to tackle these common sense issues,” Kenyatta said.

He welcomes residents to visit his constituent service office at 1501 N. Broad St., Suite 17 and invites them to visit his website – www.pahouse.com/Kenyatta – which has links to information on state services and includes a form that enables residents to email him. Residents also can follow Kenyatta on Facebook and Twitter.

The Pennsylvania House of Representatives swearing-in takes place on the first Tuesday in January every two years. This year is Pennsylvania’s 203rd legislative session.