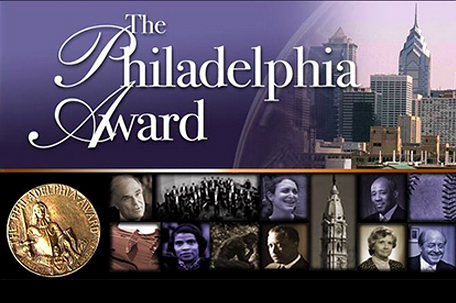 The emotion was superlative. The crowd was stacked with luminaries. The smiles were universal. Last week’s 94th Philadelphia Award ceremony at the Constitution Center was, simply, in a word, grand.

Watching R&B music mogul and community rejuvenator Kenneth Gamble and the 70-year-married couple, Suzanne and Ralph Roberts, who started Comcast Universal Companies, accept what has been called the Nobel Prize for Philadelphia, tickled each of the nearly 300 guests with renewed pride as beneficiaries of a hometown bequeathed to us by Benjamin Franklin and Bishop Richard Allen.

Gamble’s sublimely eloquent acceptance speech even found room to link the evening’s joyousness to the tragedy still engulfing Baltimore and other urban centers struggling to produce a “true democracy” for all of its citizens; rich or poor, black or white; native or immigrant.

Reviewing the previous Philadelphia Award winners (listed on the back of the program) is a sobering lesson of just how long it has taken Philadelphia to evolve into something resembling a universal democracy since the Edward Bok conceived the award in 1921. That list exposes the ethnic trajectory of Philadelphia, like dozens of other urban centers, to reveal its dilatory development into a mecca for European, Latin, Asian and, of course, African, immigrants. Every decade or so saw the annual winners brought a different hue to the whites-only catalog that dominated the pantheon of leaders in Philadelphia’s formative years. 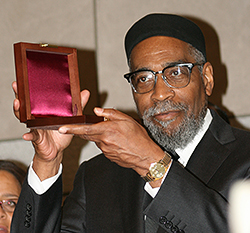 Businessman and legendary songwriter Kenneth Gamble was honored with the Philadelphia Award this year. Mr. Gamble and wife Faatimah with their families and philanthropists Suzanne and Ralph Roberts were honored at the Constitution Center last Wednesday evening. The Philadelphia Award is one of the city’s highest civic honors, was established in 1921 by Ladies’ Home Journal editor Edward W. Bok to acknowledge and encourage community service.
Photo by Leona Dixon

It would take two decades before the first African American, world famous contralto Marian Anderson, would be honored with the Philadelphia Award in 1940, the year after she courageously performed on the steps of the Lincoln Memorial after being snubbed by the Daughters of the American Revolution. A new generation, the judicial ending of Jim Crow public education and another World War would become history before a second African American would be honored when Rev. Leon Sullivan won in 1965. Educator and school board president Dr. Ruth Hayre would win 10 years later followed by Father Paul Washington in 1985 and former City Council President John F. Street, after another decade, in 1995.

Two blacks would win back to back Philadelphia Awards at the start of the new millennium, with eminent economist Dr. Bernard Anderson in 2002 and Art Sanctuary founder, Lorene Cary, in 2002. Philadanco founder and director, Joan Myers Brown, would claim her award in 2009.

So, when we uplift Kenny Gamble atop this summit, there have been eight African American awardees in the 93-year history of the city’s top civilian prize. Six of those winners have come in the 40 or so years since the American mainstream opened a few of its portals to power, prestige and some level economic security.

That’s a slow pace by any account. Our excellence certainly deserved quicker recognition. But, when I measure those eight winners who excelled against titanic odds, I am encouraged that we will produce more just like them.