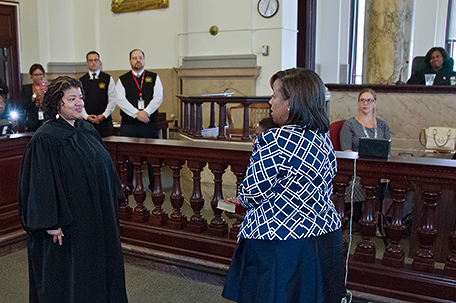 ABOVE PHOTO:  Attorney Kelley B. Hodge is sworn in by the Honorable Sheila Woods-Skipper as Philadelphia’s 25th District Attorney at City Hall on Tuesday, July 25, 2017.  Hodge is the Interim DA, until the newly elected DA takes office in 2018.   (Photo by Bill Z. Foster)

“Thank you for having the confidence in me to lead this office, an office that I have profound admiration and respect for. The Board of Judges have entrusted me with a responsibility that requires diligence, intelligence, patience and most of all humility, and I can assure you that I will work every day, as I have for my 20 years as an attorney and advocate, to deliver just that to the citizens of Philadelphia,” said Kelley B. Hodge, District Attorney for the City of Philadelphia.

“To the members of the District Attorney’s Office, it’s good to be back, and this is our restoration period. Our opportunity to look at adversity from the rear-view mirror and know you have weathered the storm. The citizens of this city deserve our best as members of the District Attorney’s office and I hope to inspire you all to always seek to do better today than you did the day before,” Hodge added.

Before her election, District Attorney Hodge was Of Counsel to Elliott Greenleaf, where she developed a practice focusing on criminal, education, risk assessment, compliance, and civil rights law. Prior to joining Greenleaf, she was the Title IX Coordinator at the University of Virginia and responsible for the implementation of a new sex and gender based harassment policy in the University’s eleven schools. 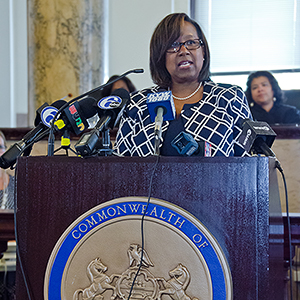 Before joining the University of Virginia, Ms. Hodge was appointed by former Pennsylvania Governor Tom Corbett to serve as the Safe Schools Advocate under the Pennsylvania Commission on Crime and Delinquency. As Advocate, Hodge oversaw the reporting and response to incidents of violence in the Philadelphia Public School system. She worked closely with the First Judicial District Juvenile and Adult Courts, local law enforcement, mental and behavioral health agencies, and Philadelphia’s City Council, District Attorney’s Office, Mayor’s Office, and human relations agencies to ensure each student’s civil rights were protected.

“I would also like to thank the office’s leadership team who not only kept improving the Philadelphia District Attorney’s Office’s policies and programs, but made sure the entire organization remained focused on justice and serving the people of Philadelphia,” said Hodge.

Ms. Hodge began practicing law in the Commonwealth of Virginia as a criminal defense attorney for the Richmond Public Defender’s Office in 1997. In 2004, she began practicing law in the Philadelphia District Attorney’s Office. For eight years, Ms. Hodge prosecuted thousands of cases ranging from Misdemeanor Theft to Attempted Murder in the First Judicial District. She trained and managed new and seasoned Assistant District Attorneys and assisted in the creation and implementation of various diversionary programs.

In 2013, she was selected to serve on a Pennsylvania Joint State Commission on Violence Prevention in the wake of the Sandy Hook Elementary School tragedy, and in 2014 she was appointed by then Governor Corbett to serve on the Interstate Compact for Juvenile Justice.

Ms. Hodge received her Juris Doctor from the University of Richmond’s T.C. Williams School of Law in 1996. She is a 1993 graduate of the University of Virginia where she received her Bachelor of Arts Degree in Foreign Affairs and in Spanish Language and Literature. She is a native of Montgomery County, PA and graduated from Mount Saint Joseph Academy in Flourtown, PA. Ms. Hodge currently resides with her husband and son in the Northwest section of Philadelphia.