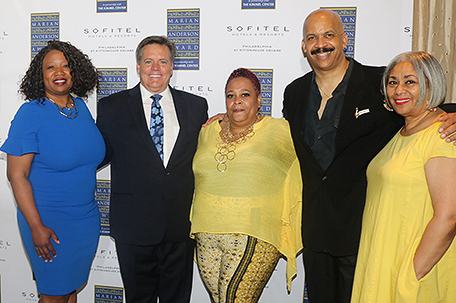 It’ll be “Ladies Night” at this year’s Marian Anderson Awards as R&B pioneers Kool and the Gang are this year’s honorees.

For those who remember getting down with the “Jungle Boogie”, disco dancing to “Open Sesame” along with John Travolta in “Saturday Night Fever” and remember that the original riff to Jazzy Jeff and the Fresh Prince’s “Summertime” was the song “Summer Madness,” Tuesday, November 12 will be a night to remember.

Or maybe, you might get a group of your best girlfriends for “Ladies Night” at the Kimmel Center for the Performing Arts as the Marian Anderson Awards gala honors the group that gave us all of those songs, Kool and the Gang.

At a June 5 press conference held at the Sofitel, the gala’s hotel sponsor, gala chair Dyana Williams and Willa Hightower, chairwoman of the Marian Anderson Awards, joined Mayor Jim Kenney in announcing the honor for the R&B group, which is celebrating its 50th anniversary this year.

“[Kool and the Gang] represent love and joy and everything that Marian Anderson stood for,” Williams said. “They brought the soundtrack for our lives for 50 years. It makes to show them how beloved they are as they celebrate their 50th anniversary.”

“We are honored to present Kool & the Gang with the 2019 Marian Anderson Award,” Mayor Kenney said. “The group embodies all that Marian Anderson herself stood for, and I cannot think of a group more deserving of this prestigious honor.”

While the group is best known for its driving funk and dance sounds, Kool and the Gang has also used its renown in service to others, Hightower said. In addition to participating in Band Aid in 1984 to raise money for African famine relief, they’ve been involved with the Boys & Girls Clubs of America, and have also either donated to or performed free concerts for Haiti Relief, Wounded Warriors, Sweet Relief Musicians Fund, Kids X-press, Gabrielle’s Angels, and The National Underground Railroad Freedom Center.

“Kool & the Gang’s profound success over the last five decades combined with their philanthropic spirit makes them the obvious and well-deserving recipient of this year’s Marian Anderson Award,” Hightower said. “We are looking forward to another exceptional evening celebrating the importance of the arts in Philadelphia.”

In a statement released by the band, Kool and the Gang thanked the board for the honor.

““We are truly honored,” the statement said. “Philadelphia played such an integral part in our early career. We would not be where we are without the city of Philadelphia, or as we called it back in the day, ‘Funky Philly.’ It’s where we recorded several of our albums and where radio and fans really had our back. Receiving an award founded by Marian Anderson on our 50th anniversary means so much to us. Thank you to everyone involved.”

This marks the 20th anniversary for the Marian Anderson Awards. This anniversary was supposed to be celebrated last year, but the chosen honoree, Queen Latifah was unable to attend and the gala was cancelled.

Lady Alma was among those in attendance at the press conference. While she admitted to being a little nervous, and didn’t know what song she would be asked to sing, Alma does have a favorite from Kool and the Gang.

“My favorite song is “Joanna,” she said. “I think that song was about [former lead singer J.T. Taylor] his mother. I have a soft spot for songs about mothers.”

For more information on the Marian Anderson Awards, go to www.marianandersonaward.org/.