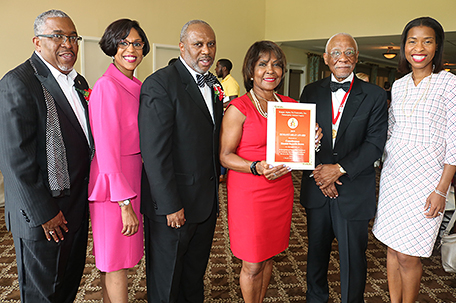 “This event is one that truly embodies the tradition of our chapter’s continued recognition of Kappa men, both alumni and undergraduate, along with a legacy family who have demonstrated what our fraternity’s motto of “achieving in every field of human endeavor” is all about,” Polemarch L. Douglas Harrell, Jr., said. “In addition, we recognize an individual outside of Kappa who demonstrates a commitment to the community that we serve with the utmost rigor and fidelity with our Humanitarian award. I extend my personal congratulations to each awardee, as well as every student scholarship recipient on this day that we have set aside to do so.”

Program highlights included welcoming remarks by Polemarch Harrell, Jr. and Kenneth R. Brown. Bobby Hunter served as the master of ceremonies for the evening. The invocation and benediction were offered by Rev. W. Wilson Goode, Sr. The “occasion” was offered by Kenneth A. Lesene and there was a musical selection by Brothers of Kappa Alpha Psi ,  titled “In The Year 1911.”

Wilkins is a 1980 initiate of the Gamma Omega Chapter of Kappa Alpha Psi Fraternity, Inc. His nearly 39 years of service to Kappa has been exemplary, from his days as an undergrad at Cheyney University, to his current commitment to the Philadelphia Alumni Chapter. Wilkins has been a member of several committees within the Philadelphia Alumni Chapter that includes: Health and Wellness, Black and White, Founder’s Day, Scholarship Committee and the HBCU College Tour. Wilkins was also the first president of the newly formed Gamma Omega Alumni Association.

Councilman at-Large Derek Green and  his dad Walter Green — who are both Kappas — along with their family members  Anita Green, the councilman’s mother, his wife, Sheila Mitchell-Green, son Justin Green and sister Valerie Green Amos, were bestowed the Polemarch Legacy Award.

“The purpose of the Polemarch’s Legacy Award is to salute a family that demonstrates a strong belief that leadership is derived by service to others,” Councilman Green said. “For our family to receive this type of award from an organization that we love and cherish, we are extremely humbled and honored.”

Honoree Councilwoman Blondell Reynolds Brown is currently serving her fifth term as a member of Philadelphia City Council. In January 2016, Reynolds Brown was again elected to serve as Majority Whip, and is the only woman serving in City Council leadership.

“To be nominated by the leadership, Polemarch Doug Harrell, Jr., and further considered by the membership of Kappa Alpha Psi Fraternity, Inc. Philadelphia Alumni to receive one of their highest honors, The Humanitarian Award, quite frankly, put a knot in my throat,” Reynolds Brown said. “The introduction of me by one of my Penn State classmates of the Delta Theta Chapter, Richard Snow, made the moment even more special. The glue for the other program awardees, all men of amazing distinction and me, was our commitment of service to others.”

“Every four years, as elected officials, we get the chance to make choices,” Reynolds Brown continued. “After losing my mom 23 months ago and with my daughter graduating from Syracuse University one year ago, I found it necessary to do a self-analysis of who I am, where I am and what time it is. After a very difficult self-reflective decision-making process, I decided that while there is no perfect time, it is the right time for me to pass the baton, seek to do other things and pursue other interests in the next chapter of my career. Celebrating my work on the Philadelphia City Council at this time is the ultimate prize for the legislative and programmatic contributions my staff and I have made. I am forever grateful for the five successful consecutive elections. I thank the members of Kappa Alpha Psi Fraternity and the voters of our City a thousand times for the privilege to serve.”

Honoree Troy Adonis Robinson is a business operations and strategy professional who is dedicated to giving back to his community and uplifting the youth through training and mentorship. Robinson was initiated into the Philadelphia Alumni Chapter of Kappa Alpha Psi Fraternity Inc. in the fall of 2015. Robinson is an active member of his chapter and has served on several committees including the Digital Media Committee, Social Action Committee, Community Service Committee, Scholarship Committee, Membership Training Academy, and more.

Honoree Jeffrey W. Montague is the former associate vice dean of Temple University’s School of Sport, Tourism and Hospitality Management (STHM) and has over 28 years of administrative experience in higher education. A graduate of Cheyney University of Pennsylvania, which is the oldest HBCU in America, Montague went on to complete a master’s degree at Temple before joining its faculty/administration.

Congratulations to all award winners, honorees and all those involved with this stellar event!

All Around Philly Social Scene