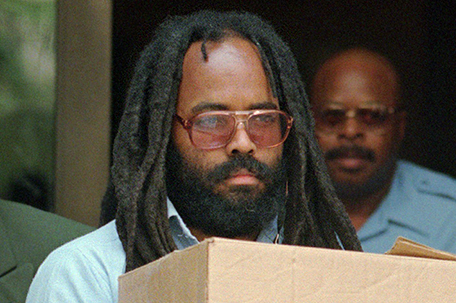 ABOVE PHOTO: In this July 12, 1995 file photo, Mumia Abu-Jamal leaves Philadelphia’s City Hall after a hearing. Pennsylvania’s highest court on Monday, Feb. 24, 2020 said it will appoint someone to review a police widow Maureen Faulkner’s request to remove the Philadelphia district attorney’s office from the case of the man convicted of killing her husband. The Supreme Court announced Monday, Feb. 24, 2020 it will appoint a special master and put a freeze on all proceedings involving Mumia Abu-Jamal’s conviction for the 1981 shooting death of Philadelphia Officer Daniel Faulkner during a traffic stop. (AP Photo/Chris Gardner, File)

HARRISBURG, Pa. (AP) — Philadelphia city prosecutors can continue to handle Mumia Abu-Jamal’s appeals despite opposition from the widow of the city police officer Abu-Jamal was convicted of killing, the state Supreme Court ruled Wednesday. A divided court denied the request by Maureen Faulkner, the widow of slain Officer Daniel Faulkner, to disqualify the city district attorney’s office from continuing to work on the matter. She sought to have the attorney general’s office appointed to take over the prosecution.

Maureen Faulkner argued that District Attorney Larry Krasner and his aides have links to Abu-Jamal’s case that should have disqualified them and that the office has not handled the case with due vigor. Krasner, a Democrat, has denied any substantial conflict exists.

Abu-Jamal is serving life for the shooting death of Faulkner during a traffic stop in 1981, and in the intervening decades, his claims of being unfairly convicted have drawn fervent supporters, both in the United States and internationally. Since Abu-Jamal’s conviction, wrote Justice Kevin Dougherty, the case has “undergone a tortuous and infamous history spanning four decades and involving numerous appeals in state and federal courts.”

A judge appointed by the high court to look into the matter found no evidence the city prosecutor’s office won’t continue to defend Abu-Jamal’s conviction. Krasner told the appointed special master, Judge John Cleland, that he thinks Abu-Jamal is guilty of the killing.

Justice Sallie Mundy, the only judge who would have granted Maureen Faulkner’s request, said there is reason to conclude Krasner and his office are unable to handle the matter with impartiality. She would have replaced them with the attorney general’s office.

“This would allow the case to proceed free from the appearance of impropriety that undermines our citizenry’s faith in the legal system,” Mundy wrote.