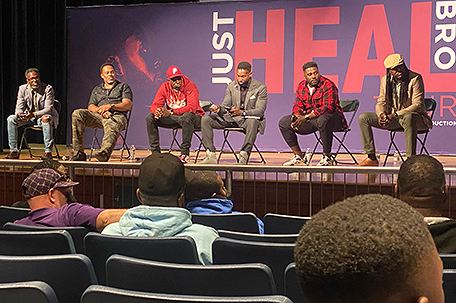 ABOVE PHOTO: The Just Heal, Bro panelists share words of wisdom and encouragement with the participants. (Photos/ Malcolm Johnson)

On Saturday evening, more than 100 Black Men gathered at the Microsoft School of The Future in West Philadelphia, all in the name of mental wellness. However, the major forum that anchored the event began the same way many “no women allowed” conversations start — by talking about sports.

Lawrence Adjah, an advisor, pastor and moderator for the night’s event, asked the crowd a simple question.

“What would it take for the Eagles to go to the Super Bowl?” he asked. .

The crowd shouted back a laundry list of limitations, speculations and desires Philly sports fans know all too well, but the most common response was health.

“If we can stay healthy, we can win,” Adjah repeated. “It’s not for lack of capacity, strength, ability or courage. In Philadelphia, we don’t lack those things, but our chances of winning are greatly influenced by our health.”

The Just Heal, Bro Tour has been making waves across the country by adding introspection to masculine energy. The global initiative was created and produced by a woman named HopeAllen. For decades, Allen has been leading initiatives to facilitate healing for Black men, and this tour is no different. In fact, it’s designed to help Black men add strength through vulnerability, promote mental and emotional healing through education and to give Black men the tools they need in order to develop and become more resilient.

In addition to the scheduled forum, Saturday’s stop in Philadelphia expanded the tour’s standard model by starting with a health fair. An inclusive cast of characters filled the school’s main hall. Men, women, young, old, short, tall and a wide range of body weights, all milling about, bobbing their heads from table to table. Volunteers in every shade of Black tested blood pressure, glucose levels, gave out male contraceptives and performed other mental and physical health screenings for those in need. People representing various fraternities, sororities and mental health advocacy groups were all eager to assist those seeking knowledge and clarity.

The most beautiful part was that each man was given the blessing of better understanding their own health, free of charge. I spoke with several Black men at the event who stressed the need for more health awareness within our community.

Sam Hightower and Ron Lloyd both received invites to Just Heal, Bro from other friends through social media. I met the gentleman as they chatted off to the side after finishing their individual health screenings. Both men said they were at the event because they prioritized their own health. They even wished they had been more health conscious at a younger age.

“We grew up in an environment where we didn’t know how to eat right,” Hightower said. “Everything we ate was fried and greasy. By the time we started learning better ways to eat, many of us were already experiencing physical issues.”

“We weren’t taught physical fitness growing up either,” Lloyd added. “When you go out to the park, you see people running with their strollers, but you don’t see Black people doing that in our own neighborhoods.”

Outside of physical health, Lloyd is a firm believer in external factors having a major impact on your mental health.

“The way we grew up can add to your stress mentally,” he said. “The neighborhood, the things we see on TV and on the news affect us, too. I’m here trying to figure that all out.”

Aside from a few finger pricks, the health fair was by far the least invasive part of the night for participants.

“I didn’t expect to be fully invested the way I was,” said Davier Daniels, a mental health professional who was asked to serve as a resource during the event.  “I thought I would be a spectator when the forum began, a fly on the wall, but once I sat down I was hooked and fully engaged.”

Six men took the stage in the nearby auditorium. Each man provided a unique perspective of being a Black man with mental health hardships and how they grew to navigate those stress factors.

As Burnett spoke, he immediately resonated with the audience by speaking to the feeling of perpetual danger Black men in Philadelphia often face.

“It’s hard to relax in a city where you’re always on guard,” Burnett said. “A lot of young brothers don’t get to experience safe spaces where we can share as brothers. As we get older, those opportunities dwindle.”

Daniels explained how over the course of the night, he began to open up to the men around him, but it wasn’t until the tension in the room was released.

“I’m sure there was a hesitancy to enter a space where vulnerability and intimacy were required,” he said. “There’s a level of anxiety that comes in every Black man, because we don’t usually occupy spaces like these, especially not with each other.”

For four hours, dozens of Black men were charged with leaving nothing on their chest, expressing their greatest fears, revealing insecurities and stripping themselves of the masculinity often built up as a defense mechanism. Just Heal, Bro sought to fill that void with the strength to not only deal with the darkest parts of their psyche, but to give this group of Black men the power to connect with their fellow man.

“We’re taught that we have to provide protect and produce,” said Murdock, “but we need so much more than that to survive”

In fact, Adjah provided a list of elements he says a Black man can’t live without. He called them the “Three C’s”.

“We all need counsel,” he said. “That’s your like-minded friends, your peers that you bounce ideas off of. We also need covering. Those are the brothers that you respect that are further along than you, that you give license to hold you accountable. Lastly, we need care. This is where you’re poured into. This also can not be exclusive to significant other. This is where the area of mental health and wellness comes in.”

Through several group exercises that felt more like shifting glaciers than just breaking the ice, you watched Black men build community, fraternity and brotherhood simply by being shown ways to do so. The flashpoint came toward the end of the night when the safe space was coming to an end.

Gadsden mentioned that as a group, we must move from a place of inspiration to a place of intentionality. That sentiment stuck with Daniels even days later, as he searched for ways to push the events of Saturday night forward.

“We often experience these pivotal moments only for them to end, and for us to go back to the same habits we were doing before,” he said. “How do I make sure to see sustainable change?”

Daniels says that implementing change starts at home. “First with me and my wife,” he said. “How can I make sure we have a mentally healthy family? From there, how can I extend it to my parents, then my neighborhood, then my city?”

The Just Heal, Bro tour continues next month in Akron, Ohio. The organization is expected to add more tour dates and locations throughout the fall.

Turn your backyard into a safe space for healthy play

For individuals with prostate cancer, “creating space” during radiation treatment could make all the difference