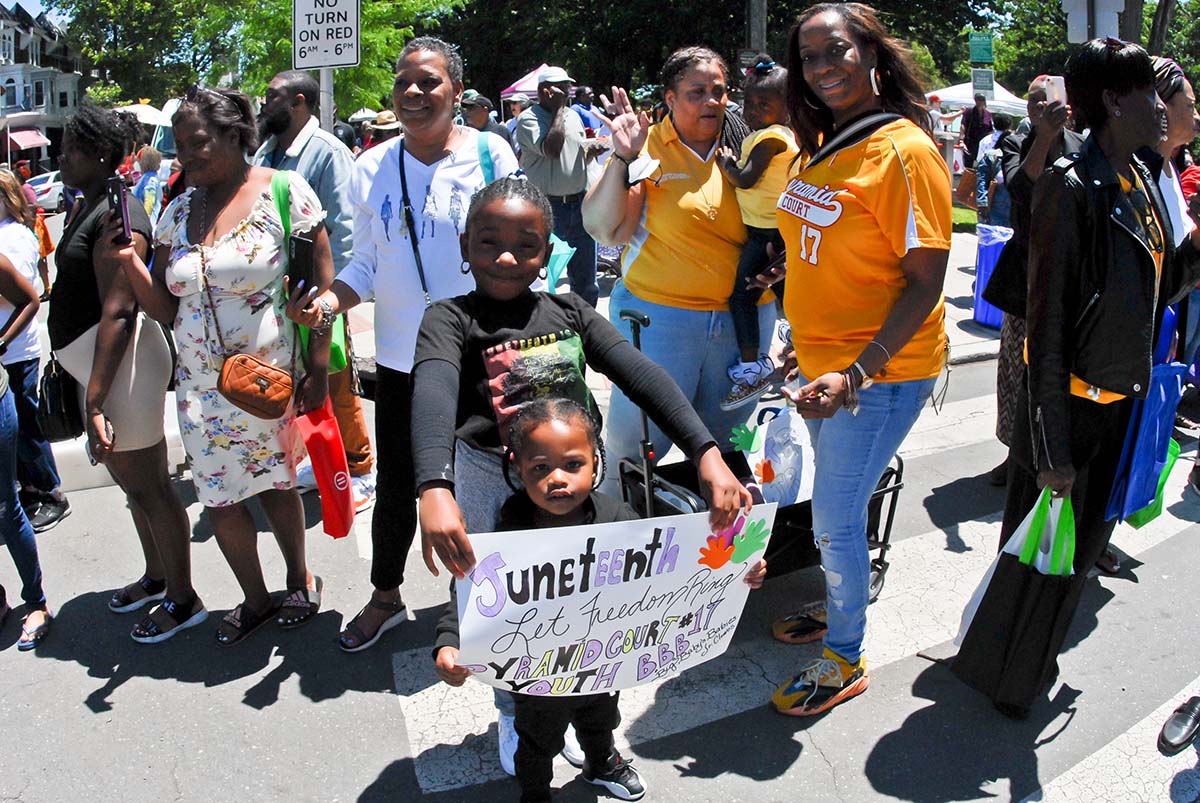 For decades, advocates have argued that Juneteenth — a commemoration of the date when Union General Gordon Granger and his troops traveled to Galveston, Texas to issue General Order No. 3, just three years after the Emancipation Proclamation, began the process of ending slavery — should be recognized as a federal holiday.

Their efforts finally paid off when Juneteenth finally became a federal holiday with a stroke of the pen by President Joe Biden on June 19, 2021. On Saturday, the Juneteenth celebration that takes place in West Philadelphia every year was a resounding success, from the parade in West Fairmount Park to the main event in Malcolm X Park.

The atmosphere was one of inclusion that saw people of all ethnic backgrounds embracing Juneteenth’s history with open arms.

The festival returned to its intended form after the 2020 COVID-19 pandemic. A favorable weather forecast, along with radio coverage from 107.9 Classix FM and television coverage from 6ABC, helped bring the event to a wider audience.

It was the second year that 6ABC broadcast the event with anchors Rick Williams and Sharrie Williams, and former radio personality Gary Shepherd, CEO of 3rd Floor Media, the consultant for the Pennsylvania Juneteenth Initiative and Juneteenth Parade and Festival Committee.

“My company 3rd Floor Media helped to put this whole thing together,” Shepherd said. “The parade, the festival and everything that’s going on. I am walking through the park right now– we have many, many more people than we had in 2019.”

“So, our goal was to make it bigger and better this year,” he said.. “It looks like it to me. There [were] some issues where some people were saying, ‘I have to be with my family on Father’s Day.’ But our whole thing was, bring the family out to the park. Do you feel the vibe out here, man? Everybody is out here loving on each other.”

On the parade route, there were beautiful floats, drummers, dancers, and various organizations, as well as antique cars driving from Fairmount Park on Parkside Avenue down 52nd Street to Malcolm X Park. As the parade wound through the neighborhood, residents cheered from every block.

As part of the celebration, the Juneteenth float and a Harriet Tubman 200th Birthday Commemoration float were noteworthy, as was the participation of the Philadelphia NAACP Branch.

Gregorio Cojulun, president of the Friends of Malcolm X Park, spoke about the first full return of this popular celebration since the pandemic began.

“We started, basically, when we renamed 52nd Street to Muhammad Ali Way in 2019,” Cojulun said. “Then we stopped because of COVID for a couple of years. Last year, we started back up with a small parade coming to the park and this year, we had a big procession, big parade and everything with floats. Everything was great, and the coverage is great.”

It was wonderful to see all of the great performers, and to watch the reporters asking the people what their thoughts were about the celebration, he said.

West Philadelphia actor Kevin Savage — of popular shows “The Quad” and “Insecure” and who is currently starring in the Lifetime movie “Single Black Female” — enjoyed the colorful floats and spoke about what he thought about how Juneteenth and Father’s Day were being celebrated on the same day this year.

“First of all, it’s a celebration of freedom,” Savage said. “The liberation of African Americans. So, it’s a day that we needed for a long time and long overdue and I’m so excited that we have it. To have it on the same day as Father’s Day, that’s a 2 for 1. Father’s Day is so important. I didn’t have a father growing up. But I have him now. So, I’m just so excited and we’re doing great things [in the years] to come.”

There were vendors at every end of the park where thousands of people were able to purchase items to remember this year’s festival.

There were food vendors, free food giveaways and a sponsored catering group called Everybody Eats that provided free hot food to people who wanted a free meal.

“I think it’s fantastic (Juneteenth on Father’s Day),” said Bill Strain from Harrisburg via Mt. Airy. “It’s the first time I’m here. And understanding it (Juneteenth) and reading [about] it, it’s just needed. It’s a positive thing, especially seeing fathers out with their children and we’re seeing everything. Everybody’s out here. And we’re seeing the good, [and not the] bad and ugly anymore. And I say, thank you, Jesus.”

People enjoyed old school music that played under a big tent where there was line dancing, skaters dancing – everyone just having an overall good time.

The joy of watching children safely play in the park was a respite from the daily threats and disruption of gun violence that has plagued Philadelphia since January, with a total of over 200 murders so far this year.

The festival culminated with a concert featuring the favorite Lady B.’s Basement Party with DJ Touchtone. The musical entertainment included Philadelphia artists along with the Force MDs, Lady of Rage, DJ Kool and the Tuff Crew.

The hard fought for celebration of this significant event is what the city needs, said Councilmember Helen Gym (D-At Large). In general, people are survivors and must teach their children how to be resilient through tough times, take pride in their heritage, and stop committing violence toward one another the way that their predecessors did, she said.

“You have to come back to history,” she said.