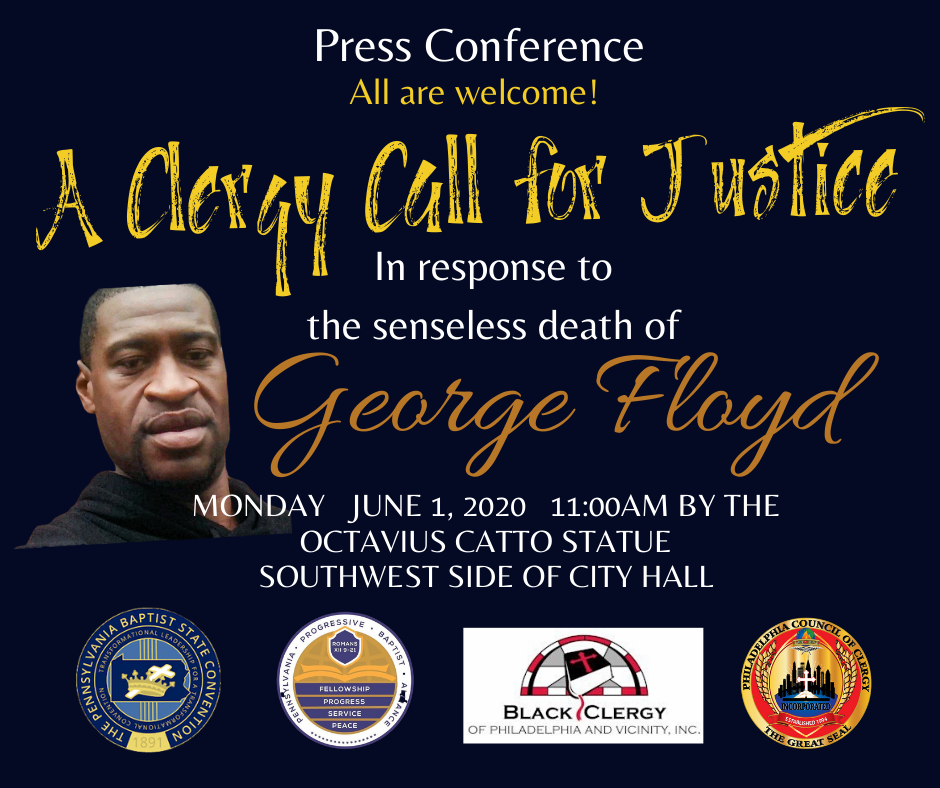 PHILADELPHIA, PA— In light of the brutal murder of George Floyd, a 46 year-old African American, who was arrested in Minneapolis, Minnesota for allegedly using a counterfeit $20 bill, a coalition of Clergy organizations are coming together to hold a press conference and peaceful demonstration outside on the southwest side of City Hall right next to the Octavius Valentine Catto statue. This event will take place on Monday, June 1, 2020, starting at 11:00AM.

”I, along with my late father, served as Police Officers who served and followed the rules of making proper arrests. We knew what was right and what was absolutely wrong, and chose to make the right choice. What we all witnessed in the video of the reprehensible manner that George Floyd was handcuffed and murdered on the street in Minneapolis is 100% not the way a police officer should conduct himself or herself. I am pleased that clergy from various faiths, from across the city of Philadelphia and vicinity, join together as one unified voice declaring our dismay, our hurt, our sorrow and our dismay for this to have occurred. The time for being quiet has long passed and now we choose to speak up and speak out.”

” Sadly I cannot say I am shocked by what we saw on the television news stations in the last number of days since the murder of George Floyd. It’s as if life is being repeated from the 1960’s, the 1970’s, the 1990’s and yes, now. Every year, there are too many Black men and black women, boys and girls, who lose their lives while being apprehended by police, or while in police custody, where the circumstances of their deaths come out highly suspect.

” To add insult to injury, not only do we have some “bad seeds” in various police departments, the membership in the Klu Klux Klan and other neo-Nazi groups are on the rise, and we have a president who spews hate. We must organize and we must act. Join us at the O.V. Catto Statue on the southwest side of City on Monday.”

“When Gil Scott Heron wrote the song, “The Revolution will not be televised” back in 1970, as prophetic and on-point as he was with much of his music, this time, he was wrong,” said Dr. Bruce N. Alick, President of the Pennsylvania Baptist State Convention. “The revolution is being televised before our eyes, and yet and still, some people try to tell us we are not seeing what we are seeing. George Floyd did not have to die. The four police who arrested him did not have to put a knee to his neck and other parts of his body, holding him down until his last breath came out. We watched a murder on video and the video does not lie. These murders at the hands of police must stop. Having those four police officers fired is not enough. Justice must be delivered.”

Other faith-based organizations and will join with the Philadelphia Council of Clergy, the Pennsylvania Eastern Keystone Baptist Association, the Pennsylvania State Baptist Convention and Black Clergy of Philadelphia and Vicinity at the foot of the Octavius Valentine Catto statue which a fitting location to hold this press conference and peaceful demonstration–one day before the Primary Election in Pennsylvania. Octavius Catto was a Black educator, intellectual and civil rights activist who was murdered at the hands of a racist white man, on election day, October 10, 1871 as he was preparing to go vote in South Philadelphia.

All participants in this peaceful rally are being urged to wear face masks and observe social distancing even as they have their say during this press conference due to ongoing concerns with the coronavirus pandemic.