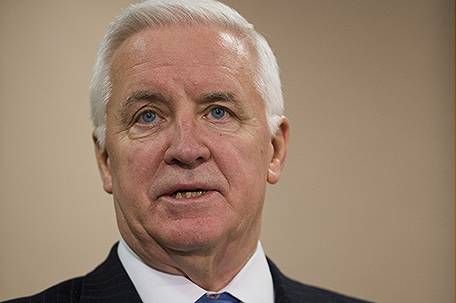 By Peter Jackson and Marc Levy

HARRISBURG, Pa.  — A Pennsylvania judge last Friday struck down a requirement that nearly all of the state’s 8.2 million voters show photo identification at the polls, saying it imposes an unreasonable burden on the right to vote and that officials failed to demonstrate the need for it.

“Voting laws are designed to assure a free and fair election; the Voter ID Law does not further this goal,” state Commonwealth Court Judge Bernard L. McGinley wrote in a decision that set the stage for a potential courtroom showdown before the state’s highest court.

McGinley, a Democrat, said the law is unconstitutional, because it does not require that a valid photo ID be convenient and available to voters.

“As a constitutional prerequisite, any voter ID law must contain a mechanism for ensuring liberal access to compliant photo IDs so that the requirement … does not disenfranchise valid voters,” McGinley wrote.

Gov. Tom Corbett declined to comment, saying he had not reviewed the 103-page ruling. His lawyer, James Schultz, said they could seek a review by the full Commonwealth Court or appeal directly to the Pennsylvania Supreme Court.

Attorney General Kathleen Kane, a Democrat who helped represent Corbett and other state defendants, said she was waiting for a signal from the governor’s office on a possible appeal.

Rep. Daryl D. Metcalfe, a Butler County Republican who sponsored the original, more stringent bill, called the decision “an activist ruling by a partisan Democrat judge.” The fact that the law may impose a burden on voters who need an ID “doesn’t give you a reason to (disregard) the voice of the people” as expressed by the Legislature, he said.

The photo ID requirement had been blocked from being enforced pending resolution of the constitutional challenge.

Friday’s ruling did not strike down the entire law, but it prohibits enforcement of the photo ID requirement that is its central element.

Lawyer Witold J. Walczak of the American Civil Liberties Union, which helped lead the legal challenge, said “the act was plainly revealed to be nothing more than a voter-suppression tool.”

Pennsylvania’s Democratic leaders charged that the law was a cynical attempt by Republicans to suppress balloting by seniors, minorities and other Democratic-leaning groups in the last presidential election. Republicans called it an election-security measure, though administration officials acknowledged that they knew of no examples of voter impersonation.

The legislation was approved during a presidential election campaign at a time other GOP-led states also were tightening their voting requirements — setting off a partisan clash that continued through Election Day.

At a 12-day trial, plaintiffs including the National Association for the Advancement of Colored People, the Pennsylvania League of Women Voters and Philadelphia’s Homeless Advocacy Project emphasized problems in processing and distributing a new ID card available for free to voters without a Pennsylvania driver’s license or other acceptable ID. They said dozens of registered voters who applied for the cards before the 2012 election did not receive them until afterward.

Lawyers for the state defended the law, arguing that a multimillion-dollar publicity campaign in 2012 and the refinement of the special voting-only card by the Pennsylvania Department of State educated voters about the law’s requirements and ensured that any registered voter who lacks an appropriate ID could get one.

In his ruling, McGinley said the special card was a “creation” of the State Department that is not authorized in the law and is “fraught with illegalities and dubious authority.”

McGinley cited “overwhelming evidence” that hundreds of thousands of qualified voters lack IDs that comply with the law and panned the state’s educational and marketing efforts as “largely ineffective and consistently confusing.”

The voting-only IDs were distributed through the state Department of Transportation’s licensing centers. The judge said that was an inconvenience for voters.

“In contrast to 9,300 polling places, to obtain an ID for voting purposes, a qualified elector must overcome the barrier of transport and travel to one of PennDOT’s 71 (licensing centers) during limited hours,” he said.