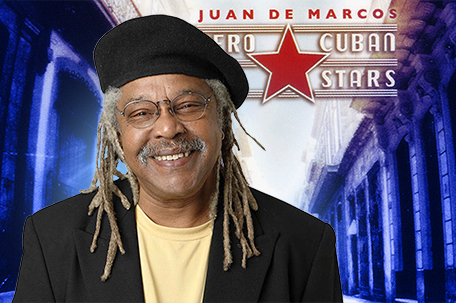 Music is a universal language. No matter where people are in the world, no matter the language, music can be felt, enjoyed and appreciated. For more than 20 years, Juan de Marcos, a phenomenal tres guitar player and bandleader, has been a staple in Cuban music. As the bandleader of The Afro-Cuban All Stars, he has been sharing the beauty of Cuban music all over the world. The group is returning to Philadelphia for a one-night only performance at The Merriam Theater.

Juan de Marcos sat down with the SUN to talk about the  culture of Cuban music and his long standing contribution to the music world.

“I grew up with this music,” he said. “My father was a musician and was one of the singers for perhaps one of the most important and marketable bandleaders of Cuban music in the 20th century. I grew up in a popular neighborhood, which is called Pueblo Nuevo in Havana. Havana is an important place; many of the remarkable musicians were born or lived there. So I grew up surrounded by this kind of music. Of course when I was a kid, I wanted to play rock ‘n’ roll because I belong to the 70’s generation. I used [to] want to be a rock and roll player. We used to play with small ensembles covering the music of the great bands of the ’70s. At a certain point in my life, I realized that the only way to make it, was to turn my eyes to the music I grew up with which was Cuban music.”

Juan de Marcos studied classical guitar at the Havana Conservatory and privately with the brilliant maestros Vicente Gonzalez and Leopoldina Nunez. He dedicated his life and career to Cuban music and went on to co-found Sierra Maestra, a traditional Cuban septeto group. Sierra Maestra was extremely popular, and experienced a great deal of success recording 14 albums and touring worldwide. He went on to become a key member in the creation of the Buena Vista Social Club.

Formed with executive Nick Gold of the London- based record label World Circuit, and producer/guitarist Ry Cooder, The Buena Vista Social Club sought to pay homage to the big band sound of the ‘50s, often referred to as the “golden age” of Cuban music.

In order to pay tribute in the best manner possible, Juan de Marcos contacted and worked with a number of iconic Cuban musicians who played with his late father. This served as a way of paying homage and honoring his father and the legacy of Cuban music respectively. The inception of the Afro-Cuban All Stars is an equally riveting tale he shared the backstory behind the group.

“When we are talking about popular music — world music —  you don’t have the marketing structure to sell the albums on their own,” he said. “So you need a band in order to promote the music. The band should perform to sell the album. So in 1997, after the recordings were done, we created a band in order to go to concerts, and then promote and perform the music recorded in the albums.

This was the first generation of the Afro-Cuban All Stars featuring Rubén González and the world-renowned musicians of the time. From there we kept the band alive, and we have had 12 generations of the Afro-Cuban All Stars so far. Normally, I change the band every couple of years. Depending on the kind of concert I want to play… if I want to play more jazzy music then I bring in great musicians that are jazz players, if I want to play more danceable music, then I bring in popular musicians that are specialists in danceable music. So I change the band, but the spirit is the same and the message is the same.”

Juan de Marcos was very clear on what that message is.

“We are alive, we are Cuban, Cuba is an important country and we have created so far perhaps one of the most influential types of popular music in the world,” he said.

Dubbed “The Quincy Jones of Cuban Music,”, Juan de Marcos continues to make his mark in the music world. The Afro-Cuban All Stars received a Grammy nomination for the album “‘A toda Cuba le gusta” and continue to be recognized throughout the world for the incredible music they create and play.

For those of you that may not be familiar with Cuban music, it is complex, eclectic and it’s designed to make you move. The most prominent aspect of Cuban music however, is the soul behind it. “Sophisticated in a certain sense,” Juan de Marcos explained. “It’s not Chopin or Mozart or Schubert. It is jazzy but it’s not boring. It’s punchy and it’s danceable. In our concerts normally we play the first part more quietly. We do that in a way that can show the audience the musicianship of the band members with solos… and it’s a little bit more jazzy. Then the second part is absolutely danceable. Normally in our concerts the people dance in the isles because Cuban music is happy music!”

The audience is guaranteed to have an incredibly special experience with the Afro-Cuban All Stars. The 14-piece band —13 pieces on stage and one person behind the scenes — will undoubtedly bring everyone to their feet. In addition to making the world dance, Juan de Marcos hopes to uphold the richness and beauty of Cuban music.

“I have been working for years trying to in a certain sense preserve the spirit of the Cuban music,” he said. “I think of myself as a kind of ambassador of Cuban culture… showing the people the diversity of our music. The albums are doing well, and the concerts are doing well, I just hope people will continue to enjoy the Cuban music and a piece of our country.”

To hear the phenomenal music of Juan de Marcos and the Afro-Cuban All Stars for yourself and to keep up with all that they are doing, visit their website http://afrocubanallstarsonline.com/. The Afro-Cuban All Stars will be performing at The Merriam Theater on Friday, January 12th at 8pm. Tickets can be purchased at https://www.kimmelcenter.org/.