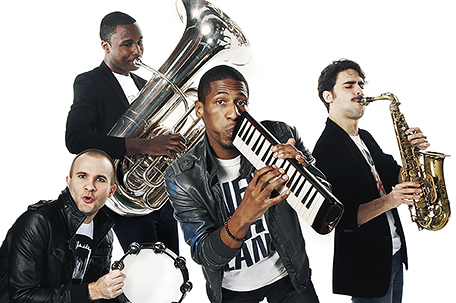 Last Saturday night was definitely live at UPenn’s Annenberg Center Live auditorium with jazz musician Jon Batiste and Stay Human.  For one night, Philadelphia was turned into New Orleans as audience members embraced a southern jazz favorite.  From HBO the show “Tremé” and most recently CBS’ “Late Show with Stephen Colbert,” the band hasn’t had a chance to tour in a while and their first stop was here in Philadephia.

If there was ever an excuse to let loose and have a good time, it was at this show.  Batiste invited everyone in attendance to feel.  Feel the music take over and allow all to dance, laugh and cry with laughter if the rhythm so compelled you.  Jon and fellow band members Joe Saylor on drums, Ibanda Ruhumbika on tuba and Phil Kuhn on guitar moved from the stage and into the aisles, bringing a true New Orleans processional to life!

From a soulful rendition of “St. James Infirmary Blues” to the jubilant remixed children’s classic “If You’re Happy and You Know It,” it was impossible to sit too long as the rhythm was infectious causing almost everyone to stand and dance including an usher with some smooth dance moves.  Drummer Joe Saylor took us to church when he picked up the tambourine and ended up damaging it as he smashed it on the stage rocker style.  The improvisation was simply perfection and their mash up of Lauryn Hill and Michael Jackson classics made it hard for us to leave.

Stay Human danced through the aisles shaking hands, bumping fists and taking selfies with adamant fans as everyone was having a fantastic time being human.