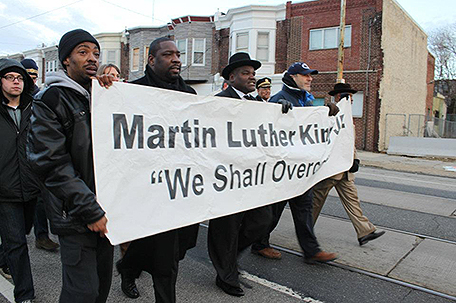 On February 4, Philadelphia City Council voted unanimously to pass the resolution, which was introduced by Johnson, to have a portion of 70th and Woodland Avenue to be renamed Paul “Earthquake” Moore Way.

Johnson didn’t waste any time, he immediately introduced the resolution after Moore passed away in order to to honor the leadership and legacy that he left behind. At the time of his death, Moore was battling cancer. He died on Friday, January 15, at the age of 62. He passed away on the birthday of Dr. Martin Luther King, Jr.

As the story is told, Moore was a talented middleweight boxer who became a powerful and outstanding community leader.

For 45 years, he collected turkeys for many needy families during his annual Turkey Day Runs. He helped the “Needy and Not the Greedy.” That was his motto and his mission.

It’s poignant that Earthquake Moore passed away on the birthday of Dr. Martin Luther King Jr., a man that he dearly idolized and loved. There was no doubt, Dr. King was his hero.

During his years serving as an ordained minister and community leader, Moore always dedicated himself to doing a re-enactment of Dr. King’s famous march in Selma, Alabama. Many times, Councilmember Johnson would often join Moore in these re-enactment marches. Together, they would march up Woodland Avenue. The march would end at 70th and Woodland Avenue. That’s the same location where a street sign will carry Moore’s name.

“Paul used the Dr. King march to bring people together,” Johnson said. “He used Dr. King’s principles of love and unity. That’s the tradition he would do on every Dr. King holiday to honor the life and memory of Dr. King. But also, Paul wanted to be a shining example of what Dr. King represented.”

Last year, Moore sent boxing gloves to President-elect Joe Biden. He wanted Joe Biden to “knockout” Donald Trump for the presidency. And that’s exactly what Joe Biden did as he won the election by more than seven million votes. It was a victory that made Moore extremely happy.

At his funeral, many people came out and gave honor to the beloved community leader. Over 100 members of the 12th District Police Department attended the funeral and paid tribute to Moore.

Johnson said that he plans to hold a ceremony to rename 70th and Woodland Avenue after Paul “Earthquake” Moore sometime in April. He also said that on that day, people must wear face masks and that social distancing will be enforced.

Paul “Earthquake” Moore– a fighter who has left a great legacy