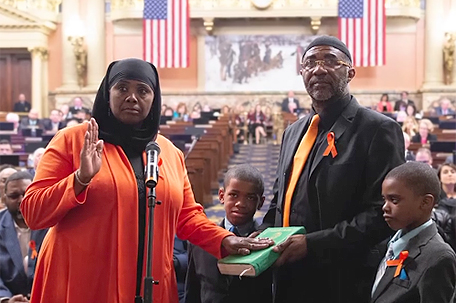 ABOVE PHOTO: State Rep. Movita Johnson Harrell is installed at the PA House of Representatives with her family looking on.

HARRISBURG–State Rep. Movita Johnson-Harrell was sworn in to office Monday to represent Philadelphia’s 190th Legislative District in the Pennsylvania House of Representatives.

Johnson-Harrell is the first covered Muslim woman to be elected to the state House.

“I’m honored to represent the neighborhood that I proudly call my home,” Johnson-Harrell said. “I will work hard to ensure the voices and needs of my district are represented in Harrisburg.”

Prior to winning a special election on March 12, Johnson-Harrell served as supervisor of Victim Services in Philadelphia District Attorney Larry Krasner’s office.