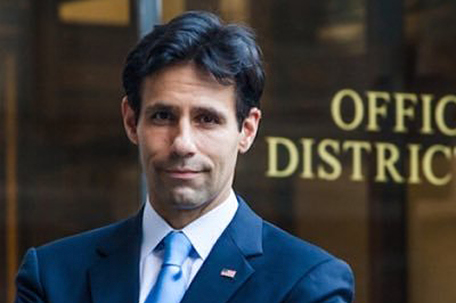 If nothing else, Joe Khan has some really high-powered people speaking up for him as he attempts to become Philadelphia’s next District Attorney.

Ed Rendell, the former District Attorney who has used his prolific fundraising prowess to become Mayor of Philadelphia and Governor of Pennsylvania, gave Khan his endorsement last week. Khizr Khan, the Gold Star father who offered to give President Donald Trump a lesson on how the Constitution works during last year’s Democratic National Convention, has thrown his support behind him too.

Now Khan, who spent time as a colleague of current DA Seth Williams before moving to the U.S. Attorney’s Office, has to see if he can parlay those endorsements into a win in the May 16 primary.

It’s easy to forget with a six-person Democratic Primary field that it was Khan, who was looking at a head-to-head with his former colleague at the time that threw his hat into the race for District Attorney first.

That he would be taking on an incumbent didn’t seem to faze Khan in the least.

“We were friendly at work and when he became the Democratic nominee for District Attorney [in 2009] I congratulated him,” Khan said. “I’ve applauded his good ideas. He had a lot of success early on. But somewhere, he lost his way.”

“I hope to improve on the good things he did once I get into the office,” Khan continued.

The son of a nurse from West Oak Lane and a Pakistani immigrant, Khan is a graduate of Swarthmore College and the University of Chicago Law School. He left the U.S. Attorney’s office shortly before he announced he was running for office and is currently a lecturer in Law at the University of Pennsylvania Law School.

The SUN sat down with Joe Khan and talked to him about his vision for the District Attorney’s office, how going for the low-lying fruit of justice actually benefits no one, and how his Constitutional Law professor at the University of Chicago changed his life.

He’s someone you may have heard of.

SUN: Thank you for your time today, Mr. Khan. I guess that my first question for you is, what made you decide to run for the office of District Attorney?

JK: I’ve spent my entire career as a prosecutor. I spent six years in the District Attorney’s office prosecuting sexual assault, domestic violence and child abuse cases. It was emotionally trying and difficult to prosecute those cases, but I wanted to do that work because those people needed someone to fight for them.

While the District Attorney holds a lot of power, in the end he’s a public servant. I think that we need to hold those who hold the public trust accountable. I’m not running for this job to advance to another job. It’s not about my ego.

SUN: When you say that the District Attorney has a lot of power, what do you mean and how can that power be better utilized on behalf of citizens?

JK: We need to be proactive. When he first came into office, Seth Williams had a lot of great ideas. One of those ideas was to have more neighborhood based legal services. I would like to improve on that if I’m elected. We have to find proactive solutions to our problems.

JK: One is the issue of cash bail. You have a lot of people who are stuck in jail because they’re too poor to be bailed out. If I’m elected, I’d like to put an end to that.

SUN: One of the more pressing issues that you’ll face as a District Attorney will be what to do when it comes to police/community relations. A lot of people have problems with the DA’s office because they feel that the office hasn’t done enough to make the police accountable. What would you do?

JK: Police/community relations are one of the things that need the most attention. Citizens need to know that the District Attorney is going to be an independent bridge between themselves and the police.

When things go wrong between police and citizens, that’s the kind of thing that should go through an independent review. Because assistant district attorneys have to work with the police to get convictions, sometimes judgement gets clouded. I would have a unit outside of the DA’s office that makes those decisions, a unit that doesn’t work with the police.

I think that the people would have far more confidence in the process.

SUN: But can you really have a unit like this when you have a police union as powerful as Philadelphia’s Fraternal Order of Police?

JK: Yes. We have to. Otherwise, it would be really uncomfortable. Again, the community has to be able to trust the process.

SUN: Here’s my last question. I understand that one of your professors at the University of Chicago Law School was Barack Obama. What was he like as a professor? What kind of an impression did he make on you?

JK: [President] Obama was an inspiration to me. He was one of the best role models and he taught me a lot about speaking and writing with integrity.

SUN: Thank you for your time, Mr. Khan. I really appreciate it.