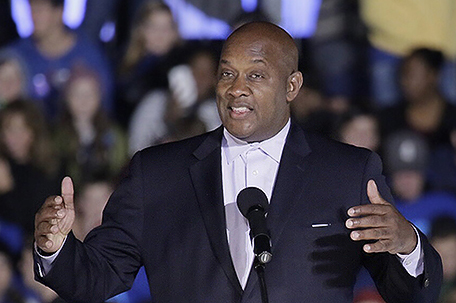 The only thing that’s really changed about the job of U.S. Rep. Dwight Evans is where he’s doing it.

If the location of U.S. Rep. Dwight Evans (D-PA) office looks a little familiar, that’s because it is.

When he was sworn in as the new Congressman for Philadelphia’s Second Congressional District, Evans merely changed the signs on the door to his Ogontz Avenue office in the city’s Northwest section to reflect his new status.

While his district has expanded somewhat — the district Evans now represents encompasses parts of South and West Philadelphia and the Main Line — his approach to making life better for the 700,000 people who make up his district remains the same.

“The majority of my time is spent in the Second District,” Evans said. “There was a huge vacuum when I took over here. We’re trying to take it to the next level, and we’re not missing a beat.”

Evans became the district’s new congressman in November 2016, shortly after the former congressman, Chaka Fattah, was convicted on racketeering charges. He is currently serving a 10-year sentence in federal prison for his crimes.

Before heading to Washington, Evans spent more than 30 years as a State Representative, representing much of the city’s Northwest section. During his tenure in the State House, he served as chair of the Appropriations Committee.

In this interview with the SUN, Evans talks about his new job, what he’s learned about Washington, and how much easier his job would be if the Commander In Chief actually had is stuff together.

SUN: Thanks for the time Congressman Evans. I guess that my first question is how are you adjusting to your new job? How is it different from your old job and how is it the same?

DE: There are a lot of things that are the same. I’m on the Small Business and Agricultural Committees, which is the same because if you look along Ogontz Avenue, you’ll see my work with small businesses. And I did a lot with food insecurity and food deserts, so agriculture makes sense. I’m also in the minority politically, which is the same as it was in Harrisburg.

What’s different about this job is that I’m representing far more people. And then there’s the national component. I never dealt with anyone at the international  level when I was a State Representative. We took the Ambassador of Taiwan for lunch at Sin-Sin in Chestnut Hill. The owners are from Taiwan. There are 23 million people in their country, and obviously there are a lot of people from Taiwan here in America.

I describe Congress as a new high school. You go there and try to learn who’s who, who’s the class president, who’s this and who’s that.

SUN: What do you like most about your new district?

DE: What I love about this district is that it’s a very diverse district. It’s 58 percent African American, 30 percent White and 4 percent Asian. It also has a lot of what I call the life science organizations. There’s Einstein, Temple, Penn, Drexel and Rosemont, which is on the Main Line. The Second District is the economic engine of the Southeast, as well as the state.

SUN: Have you been to every part of your new district yet?

DE: I’ve tried to get there. I’ve been to 300-400 meetings throughout the district. I’ve been to Rosemont College, Community College [of Philadelphia], Penn, Drexel, St. Joseph’s, the Science Center on Market Street and Sparks Therapeutic. I’ve tried to go to a lot of organizations.

SUN: Because you’re a Congressman, you’ve probably been holding Town Hall meetings like many of you colleagues. What are you hearing from votes at these gatherings?

Generally, I’ve tried to address the items that would make things more difficult in this district and in this city. Like for example, the Muslim Ban. I think it’s counterproductive, and would cost us a lot of talent. Trump’s budget also wants to get rid of Meals on Wheels, and LIHEAP. This district has a 28.1 percent poverty rate. We have 195,000 people in poverty. Cutting programs like Medicare and the Community Development Block Grant program puts more pressure on the city and the Commonwealth. [Budget Director Mick Mulvaney] said that this was a ‘taxpayer first budget.’ What are these people, chopped liver? They’re taxpayers too.

SUN: I’m sure that you came into Congress with an agenda of things you’d like to get done for your district. What does it look like?

DE: There are three things that are on my agenda. One of them is modernizing schools. Donald Trump used a rehabilitation tax credit to renovate a post office. It’s been used a lot for development and commercialization. I’ve introduced a bill with the purpose of using that tax credit to modernize and renovate schools.

[Superintendent] Dr. [William] Hite came out and said it would cost $5 billion to renovate the district’s schools. Most school districts can’t handle that alone. Schools are part of the infrastructure of a community. If you want people to keep living in those neighborhoods, you have to address them.

I’m also continuing my work on food insecurity and food deserts. Food policy is foreign policy. It’s connected to everything we do.

SUN: Education is something you’ve done a lot of work on. You were instrumental in the state takeover of the School District of Philadelphia, something that has had, to be generous, mixed results.  Education Secretary Betsy DeVos has called for more funding for charter schools and money for school vouchers. Because she is a champion of some of the reforms you’ve proposed in the past, do you think you can support her vision?

DE: Her vision is not something I can support. I’ve never been in favor of vouchers, only charter schools.  And I don’t disagree that the results have been mixed in terms of the School District of Philadelphia. Dr. Hite is trying to to the best he can, but he needs a good partner at the federal level.

SUN: Infrastructure was something that came up a lot during the campaign. We kept hearing that there might be a federal infrastructure bill on the horizon. Have you seen anything?

DE: No, we haven’t. Pennsylvania has come a long way on the state level, but there hasn’t been anything on the national level. If it did, it could really help us from a jobs perspective. Since Philadelphia has such a high poverty rate, we could create jobs with infrastructure projects. That needs to happen.

A lot of the delay is because we have a president that’s unprepared for the job. If [Trump] were far more prepared as president, we wouldn’t be where we are right now. We could have worked out a deal regarding healthcare. Everyone knows that Obamacare needs fixes with premiums and coverage. But unfortunately, because of his unpreparedness, there’s setbacks and no legislative accomplishments.

SUN: Speaking of healthcare, in the days before the Affordable Care Act, medical facilities were financially strapped due to indigent care…

SUN:…So what, if anything, can you do about that?

DE: We’re trying to stop [Trump] in his tracks. If you stop him in his tracks, he might get serious about negotiating.

As I’ve said, no one has denied that coverage and premiums need to be tweaked, but taking away care and charging more money isn’t the way to fix things.

SUN: Tell me a little bit about your early days as a Congressman. You had to finish the unexpired term of Congressman Fattah so you had to start serving almost immediately. What was that like?

DE: We had a fast turnaround. We didn’t have a lot of time. We met with the Ethics Committee, got the office and staff organized, and got to trying to meet the needs of the people. They needed an advocate, and that’s why they hired me.

At the end of the day, you have to get things done.

SUN: Well, Congressman Evans, thank you so much for your time.