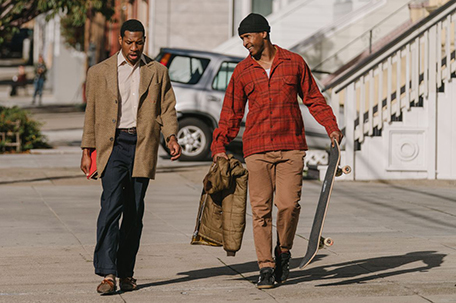 ABOVE PHOTO: Jimmie Fails in ‘The Last Black Man in San Francisco’

There are films that are executed so beautifully from start to finish that they take your breath away – “The Last Black Man in San Francisco” is one of those films.

“The Last Black Man in San Francisco” premiered at Sundance, January 26 of this year to rave reviews. In the film, actor Jimmie Fails stars in his first leading role. He plays Jimmie, a version of himself in a story very close to his heart. The film mirrors Fails’ own story, where his family loses their home in a gentrified San Francisco. Jimmie and his best friend Montgomery, played by Jonathan Majors, set out on a quest to reclaim the home his grandfather built, despite all the obstacles that face him – including the new family that is currently living in the home.

The duo face insurmountable odds along the journey, which becomes a testament to their unshakeable bond. The film, which is driven by a series of very interesting characters also stars Danny Glover, Tichina Arnold, and Mike Epps. Jimmie Fails sat down with the Philadelphia Sunday SUN to talk about the journey to creating this film. Fails co-wrote “The Last Black Man in San Francisco” with his childhood friend and the film’s director Joe Talbot.

“I mean it really just came from me walking and talking with my best friend (Talbot),” Fails said. “There’s so many different Black stories that need to be told. We’d talk about things all the time and come up with many ideas and collaborations in the past, since we’ve been making movies together for almost 10 years now. Well, not officially… because this is the first one that people saw (laughs). We’d never written a script before, so it was important that we met the people we collaborated with to help us develop it and put it down on paper.”

“The Last Black Man in San Francisco” addresses gentrification in a number of ways. The narrative of the indigenous people being pushed out of the homes their families have owned and shared for years is unfortunately not a new one. We see it happening in every city. Developers buy properties, the names of neighborhoods change to something trendy, the taxes rise significantly and before you know it Black and Brown people are pushed out and replaced. Fails spoke about the importance of telling a story about this shared experience for so many.

“We started the concept trailer five years ago,” he said. “People were reaching out to us even from the U.K., not even necessarily just Black people – just people that are getting pushed out and losing their homes. I think that’s when we sort of knew that it was a universal thing and that it was important… that’s why we needed to get it made. I felt a lot of pressure to be able to tell that story in the right way so that it could come across. I wanted it to be a rallying cry to start the dialogue and to create change if it’s possible, and I think it is possible.”

Fails and Talbot did their due diligence in making sure that the characters they created were a true representation of San Francisco.

“I think it was important to get [that] a lot of those characters are actually from San Francisco. The guys in the film that were standing outside… they’re all from the city, born and raised. It was important to get all of those aspects to show the city more. That’s what helps to create that city narrative. If we’re going to do it for the city, it has to be by the city,” Fails said.

The emotional range of the characters paired with the depth of their performances is outstanding on every level. Another endearing aspect of the film was seeing men — specifically Black men — portrayed with a sensitivity and vulnerability that is often not present when our stories are told. It’s rarer still to see Black male friendship and the tenderness that is displayed in this film between Jimmie and Montgomery (affectionately known as Mont) — it’s surprising and refreshing.

“Jonathan was like my brother from the day I met him,” Fails said. “I was sleeping in his hotel room sometimes during the shoot. When people ask, ‘how did you guys portray such a good friendship?’, and it’s like that’s really accurate… he’s actually my friend. I call him if I get a script sent to me. I always run through it with him, he’s so helpful in that way. I’m a beginner to his expert.”

From the outside looking in, the audience may feel like they know what the film is about; the attachment Jimmie has to his grandfather’s house and the quest to get the house back. After watching and absorbing the film however, audiences will understand that it’s not the physical property of the house, but instead what the house represents: family and love.

“When I lost the house, I lost my family; they were all spread out,” Fails said. “I do think it was important to show the love that you can get and all of the different ways that your family can show you love. Like my dad is angry in the movie, but really he’s just scared for me. There’s different ways to show love, and I just think it was important for people to see that. People need love.”

Every scene from start to finish in “The Last Black Man in San Francisco” is visually stimulating. The beauty of the city and locations in many ways play characters of their own in the film. Fails spoke about selecting what parts of San Francisco he wanted to incorporate in the film.

“San Francisco is such a beautiful place,” he said. “But I will say it was hard, because it did take us a long time to find a lot of these places. We owe a lot to the location scout, and to the other people that wore so many hats… people that have been working with us for years without getting paid. It was really those people that helped us find some of those places. We also know the city like the back of our hands, so it was really just about getting the locations and locking them down.”

After a long journey to creating this film, Fails shared his hopes for the audiences.

“I hope they’re a little more educated on gentrification,” he said. “I hope they can see and at least want to educate themselves and become a part of wherever they’re moving to – as opposed to just moving there. It shouldn’t be that way. You should want to know about where you live, you should want to know about the history and the people that made the city what it is. That’s really what I hope… that it can start the dialogue.”

This powerful story about displacement, the struggle to find one’s true identity, friendship and family is a must see! The performances are dynamic, and the ode to San Francisco is pure heart. To continue to support Jimmie Fails on his journey, you can follow him on Instagram at: @jimmiefailsiv. “The Last Black Man in San Francisco” is currently in theaters nationwide. Check your local listings for showtimes.