Jehovah’s Witnesses to convene in Philadelphia: Conference Message “Don’t Give Up!” 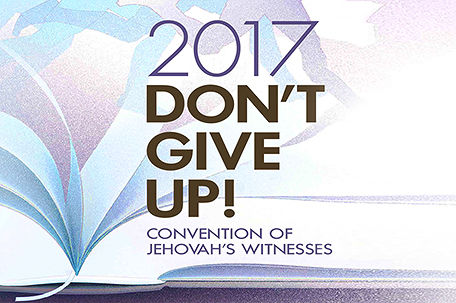 Jehovah’s Witnesses will host two three-day annual conventions, with the theme “Don’t Give Up!” on June 23-25 and July 7-9, at the Liacouras Center. Delegates from congregations in Delaware, Maryland, New Jersey and Pennsylvania will be attending.

As in years past, the Witnesses are currently participating in a campaign to personally invite the public to attend. Previous efforts to invite the public have been successful. Worldwide, there are nearly 8.5 million Jehovah’s Witnesses in just less than 120,000 congregations. However, attendance figures show that many non-Witnesses attend their annual conventions.

“Nearly 13 million persons attended our conventions last year worldwide,” said David A. Semonian, spokesman for Jehovah’s Witnesses at their world headquarters in Warwick, New York. “We hope to have an even larger audience this year.”

According to Semonian, the convention theme “Don’t Give Up!” is based on a scripture at Galatians 6:9 that explains the need for endurance during difficult times. Many today, he said, deal with a variety of problems such as the loss of a loved one, financial concerns, prolonged illness, and many others. These complex problems come at a time when the future often appears uncertain. For that reason the convention program is designed to offer practical suggestions about how to cope with such problems, along with encouragement for the future.

“Challenges in life can rob us of peace and even cause some to think about giving up,” said Semonian. “Our convention this year will benefit both Witnesses and non-Witnesses because it promises to empower individuals not only to keep enduring but also to cope with challenges productively.”

Each convention day begins at 9:20 AM with a music-video presentation. The morning sessions are followed by an intermission at 12:15 p.m. The program resumes at 1:35 PM. and concludes at 4:50 PM on Friday and Saturday, and 3:30 PM on Sunday. The program is divided into 52 parts and will be presented in a variety of formats, including brief discourses, interviews, and short videos. Additionally, one segment of a three-part feature film entitled, “Remember the Wife of Lot” will be shown each afternoon.

OIC of America affiliates convene in Philadelphia for multi-day reunion and celebration of the legacy of founder, Rev. Dr. Leon H. Sullivan