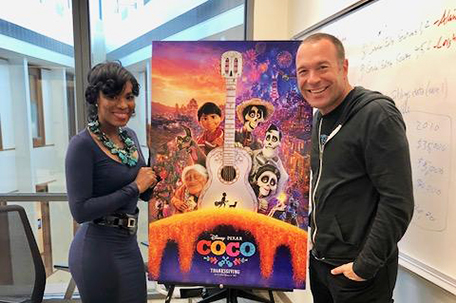 Occasionally, a film comes along that surprises viewers.

Disney and Pixar‘s newest project “Coco” is that kind of film.

Set in Mexico, “Coco” tells the story of Miguel (Anthony Gonzalez)… a 12-year-old boy who dreams of becoming a musician. The largest obstacle Miguel faces is his family’s overt hatred of music, a hatred that dates back several generations.

Forced to hide his love for the art form, Miguel looks to his idol, famous singer and movie star, Ernesto de la Cruz (Benjamin Bratt) to guide him on his quest. During Dia de Muertos (Day of the Dead), through supernatural happenstance, Miguel finds himself on a journey through the Land of the Dead. With lovable characters like Miguel, Hector (Gael Garcia Bernal), and a host of others, “Coco” is sure to take the audience on an unforgettable ride.

Recently Jason Katz, “Coco’s” story supervisor, visited Drexel University. During that time, he was gracious enough to sit down and provide an inside peek into the world of “Coco.”

Katz graduated from the California Institute of The Arts where he studied animation. He began his career at Pixar in 1994 as a storyboard artist for a number of films, including “Toy Story,” “A Bug’s Life,” “Toy Story 2,” and “Monsters Inc.” Jason Katz also served as co-story supervisor for Academy Award-winning features “Finding Nemo” and “Ratatouille.”  He was also story supervisor for Golden Globe and Academy Award winner, “Toy Story 3.”

With a little over 23 years of experience and an impressive body of work, Katz lent his creative mind to “Coco.” Katz shared the story behind its inception.

“In 2011, Lee Unkrich, the director of “Coco”, finished up his work on ‘Toy Story 3,’he said. “After taking the film around and award season, he came back to Pixar. He and I sat around a table and we talked about what he wanted to do next. We found that we had this love of Mexico, Mexican folk art, Mexican folk tales… and it was something both of us were kind of thinking about.”

“Eventually that led to us pitching an idea to John Lasseter and our creative leadership,” Katz continued. “John liked it… that was in September 2011. Then we were kind of off to the races. We were in Mexico that holiday season trying to learn as much as we could, meet as many people as we could, ask as many questions, and take as many pictures as we could. That first trip was amazing, and it gave us a really solid footing on at least a feeling of what the movie could be.”

“Coco” — which took six years to complete — not only tells the story of Miguel and his family, but also pays homage to the Mexican holiday Dia de los Muertos, which is celebrated in Mexico from October 31st- November 2nd, and honors deceased loved once with prayers, remembrance, food, and gifts. Pictures of the departed are placed on alters called an ofrenda.  Families visit the grave sites of loved ones, where they present additional offerings. Katz was vocal about making sure that “Coco” was an accurate depiction of the holiday.

“We recognized early on that we had a responsibility to look at the celebration, and look at this important tradition in Mexico and to not just have it be wallpaper to our story… it needed to be essential to our story,” he said. “We knew this was going to be no small task to create a film set in a very specific place, representing a very specific culture, and one that not everyone on the film making team grew up in or was a part of their lives. We really wanted to get it right! We wanted to feel that if you did grow up in a world similar to Miguel, and you did celebrate the holiday, and these traditions were important to you and your family… that you would come to this movie and you would feel that we were respectfully representing it in a way that felt right.”

“Coco” is a film that is multidimensional in every aspect imaginable. Everything from the attention to detail, to the character development, compels the audience to remain invested from the first frame to the last. Jason Katz offered his thoughts on what lies at the heart of the film.

“Fundamentally the movie is about the importance of family, the importance of remembrance, the fact that we as individuals are all here because of someone who came before us,” he said. “Our lives, our smiles, our dimples, our identities, are part of one long line. Sometimes it’s hard to stop and recognize that we’re part of this continual conversation that goes beyond life,but it’s also about this boy trying to find himself in that world and find himself through music, passion, and understanding what’s important. It’s never as simple as you think it’s going to be.”

“Coco” is a film that mirrors life in that it is complex in nature and aesthetics. Katz candidly shared his perspective on the importance of the medium of animation, and what animation uniquely gifts storytellers and audiences. “I get a little chip on my shoulder when people call animation ‘kids movies,’ because that’s certainly not the way my mindset is. The power of animation is that it’s an opportunity to tell stories in which you can engage everybody, from the 6-year-old to the 90-year-old. Everybody can circle around and find not only something they can identify with, but also a way to share that with people they’re next to. I love that! Six years is a long time, but if we do our job right, this movie is going to be around forever. These films have a chance to connect to you for your entire life.”

“Coco” is a story and adventure that everyone should take part in. It’s an emotional rollercoaster about family, being true to one’s self when that truth is in opposition to the expectations of others, and so much more. “Coco” offers lessons in trust, kindness, and being steadfast come what may. Those themes are only made more enjoyable by the outstanding animation, multifaceted characters, non-stop laughs, and the vibrant color palates used throughout the film… “Coco” is a must see!

“Coco” is in theaters nationwide. Check your local listing for showtimes.