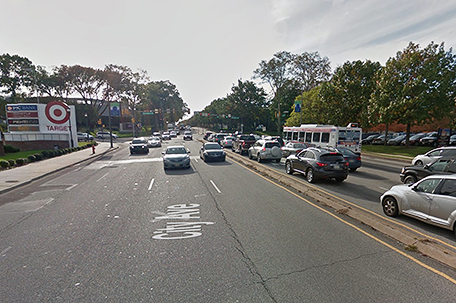 ABOVE PHOTO:  This stretch of City Avenue is now known as “Ed Bradley Way.”  (Source: google)

A major Philadelphia roadway has been renamed to honor legendary black journalist, Ed Bradley. City Avenue (US Route 1) between Presidential Boulevard and Monument Road has been officially designated as “Ed Bradley Way” by an recently-passed act of the Pennsylvania State Legislature. A bill requesting the change had been submitted by State Sen. Vincent Hughes.

“I am deeply gratified that my colleagues joined together to honor Ed Bradley, a true pioneer in American journalism.” Sen. Hughes said in an statement to PABJ PRISM. ” Mr. Bradley was nothing short of an icon and his memory should serve as a reminder of what hard work, dedication, and intelligence can achieve. It’s a wonderful tribute that a street in his home town will forever bear his name.”

As PRISM first reported last year, the effort to “co-name” the stretch of City Avenue, home to a number of broadcast stations in the Delaware Valley was initiated by New York filmmaker Leroy McCarthy, an alum of Cheyney University of Pennsylvania. Bradley graduated from the historically black school in 1964. Upon graduation, he started work as a reporter for Philadelphia’s WDAS-FM, eventually rising to become one of the first African-American correspondents at CBS News, where he gained national acclaim for his work on the program “60 Minutes”.

In 1992, Bradley returned to his alma mater to deliver the keynote to the school’s graduating class of which McCarthy was part. Bradley died in 2006 from complications of leukemia. According to McCarthy, “informal discussions regarding a permanent honor to Bradley’s legacy” began at Cheyney’s 2013 Homecoming. “Those discussions led to a full grassroots effort,” to research a suitable location to memorialize the beloved journalist.

A site on West City Avenue that once housed WDAS-FM radio was initially selected, but the station moved from that location more than 15 years ago. McCarthy then researched other locations including Bradley’s former neighborhood in the Mill Creek section of West Philadelphia, however the area was found to have been “substantially reconfigured” in the years since Bradley lived there.

Finally, a stretch of City Avenue near Monument Road was selected as the honorary location due to the concentration of broadcast outlets in the area, including the WCAU-TV building. Before a format switch in 1995, the station has been the longtime CBS Station in the city.

“The planning for the Ed Bradley Way dedication has begun”, reports McCarthy. Details regarding a time and location will be forthcoming. “The Philadelphia Association of Black Journalists (PABJ) looks forward to being a part of the celebration honoring a true legend of journalism.” said PABJ President Cherri Gregg.