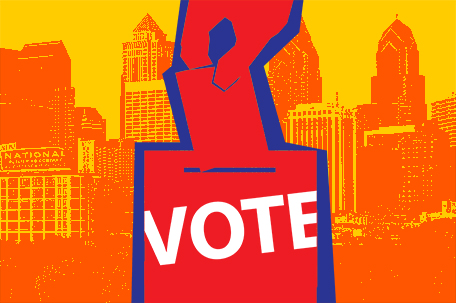 On Tuesday, Philadelphians will vote in the 2019 Pennsylvania Primary… and a sigh of relief will be breathed by all.

After hundreds of candidates’ forums, thousands of reporter questions, and lots and lots of charges and counter-charges from candidates vying for a variety of offices, Philadelphia’s voters will finally be able to have their say during the Pennsylvania primary on Tuesday.

In addition to the entirety of City Council and municipal judges, the other offices up for grabs are Sheriff, Register of Wills, City Commissioner, and last, but not least, Mayor.

The contest between incumbent Mayor Jim Kenney, former City Controller Alan Butkovitz and State Sen. Anthony Williams has been a contentious one, where charges of community disconnect on the part of Williams and Butkovitz against Kenney have taken center stage.

There were only two debates —- one produced by the Philadelphia Association of Black Journalists and sponsored by the SUN and another held on Monday night and televised on NBC-10 —- held between the three men, and the elbows flew as expected.

For most of the campaign, Williams and Butkovitz have implied that Kenney is wholly owned by Local 98 business manager John Dougherty. The labor leader is currently under federal indictment for misappropriation of funds and bribery, among other things.

Because just about everyone running has a Local 98 contribution on their campaign finance report, the Dougherty thing hasn’t quite delivered. So Williams tried to tie someone else around Mayor Kenney’s neck: former New York Mayor Michael Bloomberg. Bloomberg gave a pro-Kenney political action committee $1 million this week.

“This is simply a New York giant jumping into the race,” he said. “He gave a million dollars to his campaign. He loves stop-and-frisk. He loves the soda tax.”

The tax has been blamed for the closing of two grocery stores owned by Jeff Brown, owner of the Brown’s Shop Rite chain. Since more grocery stores, including the Giant grocery store chain, are moving into the city, Kenney isn’t buying the whole ‘Soda Tax is a job killer” argument.

“This tax is equitable because you don’t have to buy the product,” he said. “It’s likely that if you buy bottled water instead of soda, it’s the same company you’re buying from anyway. I don’t know how there’s a loss of business or jobs from people switching from one product to another.”

On the subject of stop and frisk, Williams and Butkovitz accused Kenney of breaking his promise to end the practice, which was deemed legal under the Terry v. Ohio Supreme Court decision and said that the mayor didn’t do enough to combat poverty. Both men have promised to use money from the city’s $385 million surplus to take care of this and other problems, if elected.

Also on the ballot is the Sheriff’s office. Incumbent Jewell Williams is taking on fellow Democrats Rochelle Bilal, president of the Guardian Civil League, Malika Rahman, a former deputy in the Sheriff’s office, and Larry King, Sr. The party opted not to endorse anyone in this race, joining the Black Clergy of Philadelphia and Vicinity in that decision.

Part of the reason for this is the controversy surrounding Sheriff Williams. He has been accused of sexually harassing two women, Marlaina Williams and Vanessa Bines. Bines still works in the Sheriff’s office while her federal suit is pending, while the City has settled Williams’s lawsuit for $127,000. The Democratic Caucus of the State House in Harrisburg also settled a sexual harassment lawsuit filed against Sheriff Williams by an employee of the State House.

Despite the controversy surrounding him, Williams has his supporters. Among them is a group of women calling themselves Sistahs For Sheriff Jewell Williams. Sister Taleah Taylor, the founder of the group, says that Williams is incapable of what he’s been accused of.

“I grew up with him,” she said. “My whole family has known this man and knows him as a good and honorable man. A lot of the women who are against him are going off of the stuff that they seen in the newspapers because they’re not smart or capable enough to do their own research. If they did their own research, they’d get a different view. If they ask me, I’ll correct them and let them know what I’ve always known…that he’s one of the few politicians that sticks to his word.”

The polls open for the Pennsylvania Primary at 7:30 am on Tuesday, May 21.