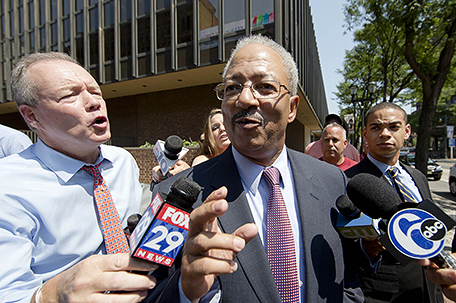 When it comes to the financial slight of hand that’s landed him in federal court, U.S. Rep Chaka Fattah says he did nothing wrong.

On Monday, he began the fight to retain his freedom.

Fattah’s trial on federal corruption charges began in the same courtroom at the federal courthouse on Market Street and before the same judge that sentenced his son, Chip, to five years in prison on bank fraud charges in February.

The Congressman was one of four defendants indicted on a variety of charges including conspiracy, wire fraud, and money laundering in connection with a $1 million loan that the Congressman took to buy ads for his flagging mayoral campaign in 2007.

During his opening arguments, Assistant U.S. Attorney Paul Gray told the jury of six men and six women—a jury that includes four Blacks, three women and one man—that the reason they were hearing this case was because Fattah solved his cash flow problems using other people’s money.

“Chaka Fattah, his associates, his staffers, and the nonprofits he controlled all conspired together toward the same goal: to steal to pay the congressman’s debts and sustain his congressional career,” he said. “The congressman abused his office and authority over and over again by taking bribes and stealing to protect his own interests.”

But when he got his chance to address the jury, Mark Lee, one of Fattah’s attorneys, laid the blame for the loan, the payment scheme, and connected conspiracy at the feet of political consultants Gregory Naylor and Thomas Lingenfeld.

Naylor and Lingenfeld were the men who actually took out, and paid back, the illegal $1 million loan from Al Lord II, former CEO for Sallie Mae. Naylor and Lingenfeld have already pled guilty and are expected to testify as government witnesses in the trial. Lord testified on Tuesday under a grant of immunity from prosecution.

Because of the deal they’ve made with prosecutors, the jury should take what Naylor and Lingenfeld say with a grain of salt, Lee said.

“This is a case about two men who cut deals with the federal government to keep them out of federal prison,” he said.

Lawyers for Fattah’s co-defendants—Karen Nicholas, former CEO of the Education Advancement Alliance, former Fattah aide Bonnie Bowser, lobbyist (and former Deputy Mayor) Herbert Vederman, and former Solutions for Progress CEO Robert Brand—spent much of their time during opening arguments trying to put some distance between themselves and the allegations against them.

Among the witnesses that testified in the first week were people who worked for CORE Philly and Educational Advancement Alliance to provide educational opportunities for underprivileged kids.

The congressman’s wife, former NBC-10 anchor Renee Chenault Fattah wasn’t present in the courthouse earlier in the week. While she isn’t under indictment herself, prosecutors allege that she was in on one of the crimes her husband is accused of, one that involved a Porsche that she sold to Vederman on paper to cover a bribe he had allegedly given the Congressman.

The trial is expected to go on for eight weeks.