Is This My Stop? 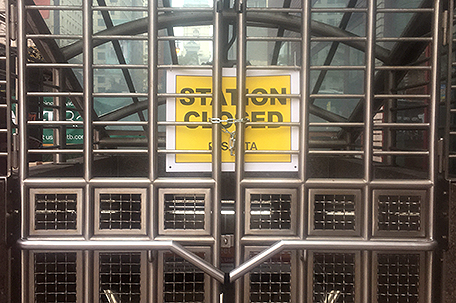 ABOVE PHOTO: The gates of the Broad Street Line’s Walnut-Locust station are closed due to the SEPTA strike. Members of Transport Workers Union Local 234 walked off of the job on Tuesday morning when the union’s contract with the public transportation authority ended and negotiations broke down.  (Photo: Denise Clay)

Commuters who rely on SEPTA to get to work, school and errands are hoping that the transit authority and Transport Workers Union  Local 234 can answer that question for them sooner rather than later. Especially since Election Day is just around the corner.

When it comes to labor strife in the City of Philadelphia, the sight of Congressman Bob Brady is usually a harbinger of good news.

As Election Day approaches, and SEPTA’s buses, trolleys, subway and elevated trains continue to sit idly, Philadelphia’s commuters and those anxious about getting the vote out on Nov. 8 are hoping that the Congressman continues to be the City’s rabbit’s foot.

Brady, who has been acting as a mediator of sorts between SEPTA and Transport Workers Union Local 234, appeared at the Sheraton Hotel in Center City Tuesday night as negotiators from the transit system and the union attempted to hammer out a contract designed to get Philadelphia’s commuters conveniently moving again.

TWU Local 234’s 4,700 members walked off the job when their contract expired  12:01AM Tuesday morning. On Oct. 16, the union voted to not only authorize a strike, but also to take extending the previous contract off of the table.

Like he has at other times, Brady pledged to do what he could to shorten the strike.

“If I can find money, I will try to find money, whether it be the city, state or feds, and if we can do that, we’ll do that,” he said. “I’ll do whatever I can do, whatever we can possibly do to make sure this thing gets over.”

Ending the strike is going to mean finding a solution to the impasse between the two sides on a variety of issues ranging from pensions and healthcare costs to workplace issues like scheduling and bathroom breaks.

Walking off of the job wasn’t something that the Union wanted to do, but it felt it had no other choice, said Willie Brown, TWU Local 234 president.

“We’ve conceded on a lot of things,” Brown said. “It’s the only tool available to us. We’ve tried to get them to go to binding arbitration with us, but they won’t do it.”

The pension issue is a sore spot for TWU Local 234 President Willie Brown. When negotiating the Union’s deal with SEPTA two years ago, the transit system promised pension reform. Instead, it did just the opposite, Brown said.

Because Election Day is looming, many are concerned about people being able to get to the polls without mass transit. While most voters can go to polls near their homes, those who vote either before or after work, or who may not have changed the address on their voter registration yet may have problems getting to the polls.

But that said, his responsibility is to his members, Brown said.

“It’s always a concern,” he said. “I’m a citizen, so I’m always concerned about voting. But, we’ve been talking for two years. We had to draw a line in the sand…”

“I’m sorry… I hope this gets settled by then,” Brown said.

If the strike hasn’t been settled by Election Day, however, SEPTA said in a statement that it would go to court to enjoin the picketing and force Local 234 members back to work.

SEPTA’s latest offer, which includes an increase in healthcare contributions and the removal of a compensation cap for pensions, was rejected by the Union Wednesday. After that rejection, Pasquale T. Deon, SEPTA’s board chair, called on the union to return to the table and “negotiate in good faith.”

While the strike is impacting those who use city-based transit to get to work like city buses, trolleys, and the Market/Frankford and Broad Street Lines, regional rails, Paratransit, and suburban bus service haven’t been affected.

That hasn’t meant that accessing any of these services has been easy for commuters.

Because regional rail lines are currently the only way you can get around the city via mass transit, they’ve been packed. On Tuesday, the first full day of the strike, trains were cancelled due to picketing TWU Local 234 members, further complicating things for commuters. SEPTA got an injunction from Philadelphia Common Pleas Court to move the picketers.

Getting around the city by car has also been complicated as commuters who would normally take trains or buses are opting to use their cars instead. The Philadelphia Parking Authority is offering discounted parking at its lots.

Thanks to discount codes shared via social media, commuters are also availing themselves of the ride sharing services Uber, and Lyft. Uber has revamped its app and has also expanded the number of Uberpool cars available, but consumers should watch for higher “surge” pricing for rides. Those not wanting to use either service are availing themselves of the Gypsy cab drivers often seen at SEPTA bus stops.

Uber has also gotten involved in the Election Day transportation situation. The ride sharing service has partnered with VoterDrive to get voters to the polls. There is also a new app,

For more information on VoterDrive, go to www.voterdrive.us. For SEPTA’s transportation contingency plan, go to www.SEPTA.org.

At press time, negotiations between SEPTA and TWU Local 234 were continuing. Please go to www.philasun.com for updates on this story as they become available.

In Search of the Buckeye State