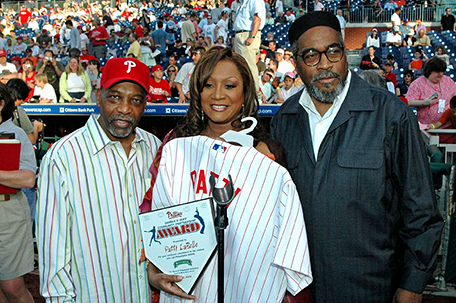 “We congratulate our very dear friend Patti LaBelle on her street naming honors today. Patti is one of the greatest music legends to come out of Philadelphia, and she is beloved around the world. This could not happen to a better, and more well-deserved, person and friend! Congrats, Patti!”

The block of Broad Street between Spruce and Locust streets has been renamed “Patti LaBelle Way,” not far from the section of Broad Street that was renamed “Gamble & Huff Way” several years ago.

It also is close to the former location of Gamble & Huff’s Philadelphia International Records (PIR) offices, which stood for decades at 309 S. Broad Street.

That is where Ms. LaBelle, who grew up with Gamble in West Philadelphia, signed with PIR in the midst of her superstar solo career following worldwide success as leader of the vocal groups Patti LaBelle and the Bluebelles and later, LaBelle.

Her solo hits with Gamble & Huff include “Somebody Loves You Baby” and “If Only You Knew.” More recently, Miss LaBelle collaborated with Gamble & Huff for a pair of 2008 projects, the LaBelle reunion album “Back to Now,” and Gamble’s patriotic anthem, “I Am An American.”

A street of her very own: Legendary Patti LaBelle honored on Broad Street