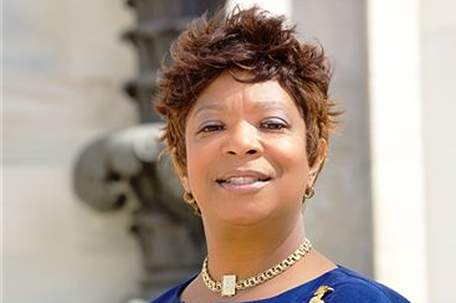 If Sharon Booker manages to win a seat on the Delaware County Council, she intends to make sure county residents are better informed.

Getting to the point where voters will be able to decide if they want to make her the first African American woman to ever serve on the Delaware County Council (and the only African American serving in elected office on the county level in all of Pennsylvania) or not wasn’t easy for Sharon Booker.

Due to a snafu on the County level, someone who was supposed to run with fellow Democratic candidates Richard Womack and Christine Reuther dropped out, because of this Booker had to run as a write-in candidate.

She managed to get 3,500 votes in the May primary, enough to get on the general election ballot. Considering that Booker won her current seat on the Sharon Hill Borough Council with the highest vote total in 2013, that’s really no surprise.

When she’s not serving Sharon Hill or running for Council, Booker is the owner of the A Plus: A Personal Touch Hand Wash & Detail shop and was also an Environmental Claims Administrator for the FMC Corporation in Philadelphia. She’s also the chair of the Diversity and Inclusion Committee for the Delaware County Democratic Party and serves on the Black Caucus of the Democratic State Committee.

“I believe that the democratic process should be inclusive,” Booker said. “I want to make sure that everyone participates.”

The SUN spoke with Booker about her candidacy, what she hopes to accomplish should she win, and why the residents of Delaware County should be asking more questions about how their government works.

SUN: Thank you for your time, Ms. Booker. What made you decide to run for this office?

SB: I’m running because we need a change at the County level. We need more transparency and accountability in our county government. We have a budget that residents aren’t able to decipher. You have to fill out a right-to-know request for basic information. For example, if you want the minutes for the current board meeting, you can get them. But if you want the minutes from the previous two meetings, you can’t get them without a [Freedom of Information Act] request.

I’m also running because I don’t like one-party government. We’re the only county in Pennsylvania’s 67 counties that has no seats designated for the minority party on Council. Because of this, there are no checks and balances. No one questions the decisions that are being made.

SUN: How has that impacted what goes on in the County? For example, are there services that Delaware County residents need that they’re not getting?

SB: We have a $338 million budget. About 40 percent of that goes to what’s called the “administration of justice” or the criminal justice system. But only 26 percent goes to social services. We have no health department in the county, so if we have an outbreak of something, we’ll have to depend on another county to notify the Centers for Disease Control.

SUN: Is there a big need for social services in Delaware County?

SB: Yes, there’s a big need for social services. We need to help the disenfranchised to make a way. Social services give people a helping hand and that’s what this country is all about. If we had more social services, we’d probably have less of a need to spend so much on criminal justice.

SUN: Are you running as part of a slate?

SB: I’m running with two other Democrats—Richard Womack and Christine Reuther—and if we are successful, we’ll be in the majority.

SUN: How are you being received on the Campaign Trail? What kind of reactions are you getting?

SB: People are very enthusiastic about change and we’re hoping that it’s going to translate into votes on Election Day. I’m hearing a lot of the same discord all over the county.

SUN: What, in particular, are the voters most concerned about?

SB: Well, for one thing, we have a patronage system that’s second to none. For example, if you want a county job, you have to be a Republican. If you move into the County from somewhere else, you have to change your registration to Republican if you want goods and services. But that’s the danger of one-party rule.

SUN: If you’re elected, what would you like to accomplish first?

SB: The first thing I’d like to do that will have serious consequences to put in an ordinance that ends the practice of telling people that they have to change parties to keep their job. I’d also like to start a roving town meeting that willl go anywhere in the County. Right now, we have roving meetings, but they only go to Republican areas. They’re not equally distributed. I also intend to take a thorough review of the budget because we’ll have access to it.

SUN: Thank you so much for your time, Ms. Booker. I really appreciate it.