Inaugural ‘On the Table Philly’ event a huge success 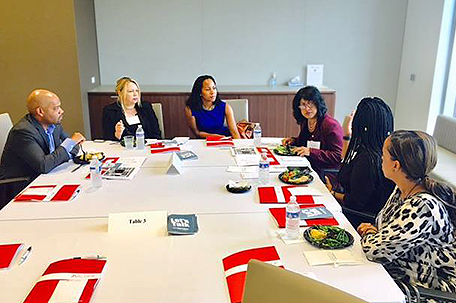 ABOVE PHOTO:  Archer & Greiner PC hosted five tables at their lunch discussion, where each table discussed a different demographic and the issues and potential solutions that pertained to each of those groups. The demographics discussed were millennials, baby boomers/Retirees, women, immigrants, and Impoverished Children.  (Photo courtesy: On the Table Philly)

Around 2,400 individuals participated throughout the Philadelphia region.

Philadelphia, food, and conversation is a winning combination on any day of the week, but Tuesday, May 23rd was unique.

The Philadelphia Foundation and The John S. and James L. Knight Foundation joined forces to sponsor the region’s first “On the Table Greater Philly” event.

The day began with breakfast roundtables in the morning, then continued with discussions during lunch and dinner. According to the Philadelphia Foundation, close to 300 individual tables of 8 to 12 individuals – about 2,400 people in total — with more than 150 organizational hosts participated.  Participants included businesses, community groups, non-profit organizations from the five-county region and South Jersey.

On the Table Philly is based on a program put on by the Chicago Community Trust, said Michelle Huttenhoff, Community Foundations Program Associate for the Knight Foundation. After testing the idea in Lexington, Kentucky, the Foundation decided to try it in 10 cities including Philadelphia this year, she said.

The On the Table program allows groups of people in the community to come together over a meal and discuss the most pressing challenges a community faces, what to do about those challenges, and ways to empower the community to solve them through planning and making the most of available resources, Huttenhoff said.

Each On the Table session ended with a chance for participants to take a survey that will turn into a report detailing community priorities. Once that report is released, it will be used as a starting point to move things forward, Huttenhoff said.

“I think this is a citywide learning experience,” said Philadelphia Foundation President and CEO Pedro Ramos. “To make it the most fruitful learning experience, we need to hear from the broadest range of voices…discussions have been [held] among institutions, but we’re also having real resident to resident, community to community, citizen to citizen discussions. I think the opportunity and the challenge for us coming out of today is to make the most of that.”

Ramos is looking forward to receiving the survey feedback and improving upon the program going forward.

“I hope that we can continue to develop this idea, because we do think that the well-being of our community and our democracy depends upon an informed and engaged citizenry,” he said. 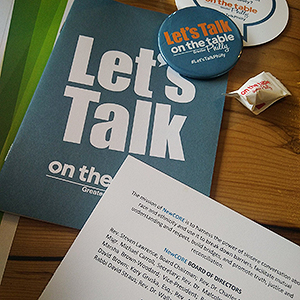 (Photo courtesy: On the Table Philly)

Several participants gathered at the law offices of Ahmad Zaffarese LLC to discuss the growing importance of the Black millennial demographic when it comes to shifts in voting patterns and policy making. Press access was restricted from a large part of the session, which was private, but participant Jenne Ayers explained its purpose.

“It is a group of young African Americans who are concerned and involved in politics and policy throughout the city,” said Ayers, who ran for City Council at Large in 2015. “We wanted to get together and have a conversation about what the future of politics in the city, and how we can come up with solutions for everyone, coming from a spirit of unity.”

Ayers went on to explain that while no one at the event had current plans to run for office, but have diverse ideas about how they would like to engage with the community and effect policy.

PECO sponsored and participated in this lunchtime discussion — which was moderated by PECO Director of Communications and former mayoral candidate Doug Oliver — drew 20 attendees, nearly doubling the number who had registered.

Among the many topics discussed, the participants spoke about making community schools as a clearing house of opportunity for families, agreeing that employability skills training should start early in life, so that young people are not at a disadvantage when they enter mainstream society as young adults. These skills should not only be academic or trade-based, but should include etiquette, critical thinking, listening and self-respect.

Although it was agreed that much of this could be spearheaded by a better funded and functioning public school system, that it was the entire community’s responsibility — including businesses, non-profits and families themselves — to work together, instituting a comprehensive “cradle to career” program in order to assure that no child fall through the net from birth through adulthood.

In the Rick Nichols room at the Reading Terminal Market, a small group dined on a combination of Middle Eastern dishes like tabouli and curried chicken and traditional “soul” foods like fried chicken and macaroni and cheese while participating in a discussion on race relations that focused on the sometimes fractious relationship between African and Caribbean immigrants and the native born African American community.

Moderated by Phoebe Coles, CEO of Community Marketing Concepts and Eric Nzeribe, publisher of Fun Times Magazine, the discussion centered on inter-cultural differences between these groups that share a common diaspora, but not always a common experience.

Throughout the discussion, members of the group talked about such experiences as language barriers, the ways that immigrants and native-born Blacks can connect and how to help each other navigate systems that are sometimes hostile to members of marginalized communities.

Much of the discussion centered on immigrant children and the problems they sometimes have in adjusting to their new circumstances, and ways that the community can get together to create an environment that’s safe for all of the region’s children.

Rick Sauer, Executive Director of the Philadelphia Association of Community Development Corporations, led a lunchtime discussion with 12 staff members and community stakeholders at their Walnut Street office. Sauer explained later that the conversation zeroed in on a specific aspect of equitable development: how to ensure authentic community engagement at the neighborhood level.

Few topics concerning the future of Philadelphia’s neighborhoods, their institutional knowledge and traditions than the tensions created from rapid gentrification and development. Respect for institutional knowledge and resident history in the community, active, sustained engagement and open communications are essential components for building successful partnerships in this regard.

One participant mentioned that outside funders, grantmakers and other must become comfortable with the ‘what’s in it for us’ question from concerned community members when it comes to community development, projects and other actions that directly affect them over the long term. 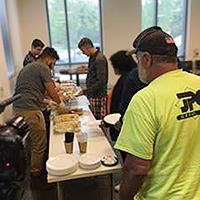 All agreed that operating in crisis mode was not a sustainable solution, and that resident-driven solutions should inform all of their activities in the community. They also decided that accepting residents as experts and equal partners in future community development was integral to lasting success.

They concluded that long-term engagement was needed from funders beyond the projects and initiatives they backed, and after reports were written.

Young people singlehandedly organized a “Youth and Relationships” On the Table event, choosing the format, topics, and peer moderators. It took place at the Public Health Management Corporation at 1500 Market Street, across the street from City Hall.

Keri Salerno, Senior Director, Strategic Development with Health Promotion Council (HPC), an affiliate of Public Health Management Corporation, said that two of its stellar programs – The Advocacy Institute and the Philadelphia Area Sexual Health Initiative – wanted to step up and be part of today’s initiative.

“They[HPC] felt that the youth voice was incredibly important to solving some of our communities most challenging issues,” Salerno said, scanning the room. “We are incredibly pleased with the turnout. We’ve got 35 to 40 youth [participating]. With everything going on with youth, who could be doing anything – like getting ready for the prom, or any of those sorts of things – but they chose to come here this afternoon and help come up with solutions to their community’s challenges.”

The group sat at three separate tables, each with its own theme to discuss the topics that they agreed while planning their event concerned them the most. The themes were: Community and Partner Violence, Health and Fitness, and Sex and Relationships.

The Community and Partner Violence group began their discussion by exploring the meaning of community, and their vision for a peaceful city. Most of them had already experienced violence in their young lives, either domestically or in their community.

Parents, friends and other family members murdered over something as petty as jealousy or inability to settle grievances without violence. One young person survived an attempt on her life when she was stabbed. Most had witnessed violence of some sort – either domestically or in their communities. All of them were determined to address the problem seriously.

Although they agreed that while there are hotspots in the city that are fairly notorious, violence is a citywide problem, and is everyone’s problem to confront and solve. They also agreed that stereotypes, rumors, putdowns and urban mythology are unhelpful and exacerbate an already tense situation.

They felt that glorified violence in movies and by celebrities in their personal lives, as well as local newscasts which report on violent altercations without reporting on community achievements and efforts to tackle crime just contributes to the cycle of despair and nihilism.

Some of the remedies and solutions they thought would be effective in breaking the cycle were better communications between local officials, education, and ongoing community discussion.

In the health and fitness group, participants discussed what it meant to be young and healthy in 2017. They listed some of the barriers to good health practices — such as lack of finances, peer pressure, cultural and religious issues — as well as some ideas of how to navigate through them.

A good part of the discussion focused on redefining what health looks like. Noting that gym memberships might be cost prohibitive for many young people, they decided that all movement – even from simple activities like walking and household chores – was part of a good exercise routine.

Another exercise issue they discussed was the importance of year-round workouts and a proper diet, both of which could be achieved with careful planning and education, in spite of financial disadvantages.

All also agreed that distorted body image impressions created by photoshopped images on social media sites and airbrushed celebrity photos were a huge obstacle, often leading to low self-esteem, fad dieting and unrealistic expectations. Peer support was also mentioned as a crucial component in helping to combat these influences.

In the group discussion about sex and relationships, young people discussed what the definition of a relationship was, and was not. The participants were wise beyond their years, with very well defined and varied viewpoints which they shared freely.

Several in the group maintained that sex was not necessarily part of it, and that a true relationship was based upon a mindset that was guided by honesty and respect – both for the other person and for one’s self.

Some maintained that sexual activity created a bond that made casual “friendzone” sex unacceptable, while others argued that as long as all cards were on the table at the beginning about the true nature of the encounter, it was what they preferred. Most took the topic of commitment seriously, and agreed that one should not misrepresent their long -term intentions.

In the end, they decided that there were several types of relationships – casual and committed – but the majority ascertained that all healthy relationships should include a sense of safety and connection on some level.

To learn more about “On the Table Philly,” visit the official website at: www.phila.org/onthetable or contact them by email [email protected] You can also view On the Table Philly conversations on social media via #LetsTalkPhilly.

Denise Clay contributed to this report.