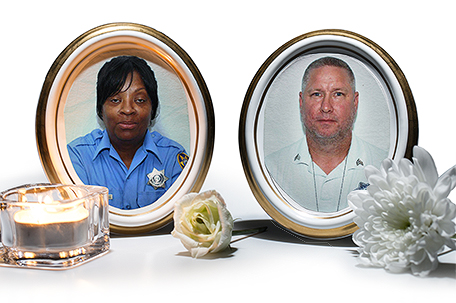 We are saddened to acknowledge and mourn the passing of two members of the Sheriff’s Office family. We salute their commitment to the highest level of service and dedication to their duties.

Sgt. Michael Jesus, who served in the Warrant Unit, has been a Deputy Sheriff Officer since 1997. Michael achieved the rank of Sergeant in 2016 and is a second-generation law enforcement officer. His father, Joseph Jesus also served in the Sheriff’s Warrant Unit before him.

DSO Saberta Campbell recently retired from the Sheriff’s Office, having served as a Deputy in the Justice Juanita Kidd Stout Center for Criminal Justice for the past 23 years.

Prior to her appointment as Deputy Sheriff Officer, Ms. Campbell served proudly as a Correctional Officer for the Philadelphia Department of Prisons.