In Memoriam: Audrey R. Johnson-Thornton: A Woman of Class, Style and Distinction 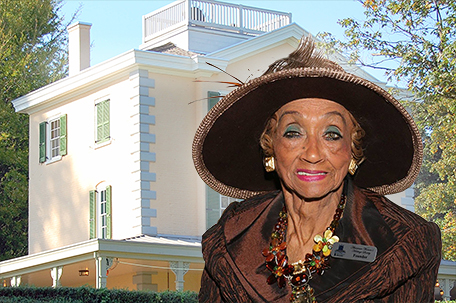 Audrey R. Johnson-Thornton was truly a woman of achievement, in every sense. For more than 30 years she dedicated herself to community involvement.

Johnson-Thornton, the president emeritus of the Belmont Mansion and founder of the American Women’s Heritage Society died Monday, April 8, 2019. She was 93.

Her leadership and distinction as a visionary is recognizable through the many accolades she received throughout her formative years. These unmeasured qualities were exceeded by each accomplishment she continued to surpass. She served as president, chairperson, director and as a member of countless civic, political, community and religious organizations.

As the founder and president of the American Women’s Heritage Society, Inc. (AWHS) in 1986, Johnson-Thornton initiated the restoration of the national historical landmark Belmont Mansion (c.1648), which is located in West Fairmount Park. Johnson­Thornton’s skill and determination saved the mansion from extinction in September 1986.

Notably, through research and investigation, it was discovered that Belmont Mansion had a direct connection to the Underground Railroad. At that time, she and the members of AWHS became stewards of the mansion.

In 2001, they celebrated their 15th anniversary of maintaining this crown jewel of Fairmount Park.

Johnson-Thornton’s visionary leadership, expressed through the AWHS mission, was dedicated to the education of the African American community in history, preservation, fine arts, literature, dance and music through exhibits and programs at the Belmont Mansion. Johnson-Thornton had published a book entitled “The Crown Jewel of Fairmount Park – Belmont Mansion” which depicts 300 years of the history of the Mansion, the Peters family, and Richard Peters’ involvement in the anti-slavery movement as president of the Pennsylvania Abolition Society.

Johnson-Thornton had relentlessly dedicated herself to community involvement over the past 30 years. Her zealous energy and labor were an inspiration to all who came in contact with her. She was a community activist, organizer and administrator in health and human services, and an advocate for women’s issues, youth concerns and historical preservation on the local, national and international level. She served as Commissioner on the Mayor’s Commission for Women; founder and president of Timberlake Camp and Ski Lodge, Inc., which is a family-owned business. Timberlake Camp is an affiliate to Timberlake Camp Charities, Inc., which has served over 15,000 children in a residential camping environment since its inception in 1969.

She is a past member of the board of trustees for Metro City YWCA. As a delegate to the United Nations Decade for Women’s Conference in Nairobi, Kenya, Johnson-Thornton organized “Future World Women ‘85,” a group dedicated to developing an international network with African sisters. She has served on the International Women’s Committee for the “We The People” Conference and the Committee on Black Women and the Constitution. This organization was formed to showcase the contributions of Black women during the 18th century in Philadelphia.

Johnson-Thornton’s outstanding record of community service extended to African Americans United for Life, Philadelphia Chapter, where she served as chairperson and organizer. This organization was created to increase the number of African Americans in the National Bone Marrow Donor Registry, and was designed to fight such diseases as leukemia and aplastic anemia. Within its first year, 12 prospective matches were discovered.

In 2002, Johnson-Thornton took on the task of coordinating the 63rd National Convention of the National Association of University Women, Inc., which was held in Philadelphia. . The NAUW chartered two new branches at that time; Kingston, Jamaica and Benin, Africa. It was believed that the addition of these two new branches  would go far in making the NAUW an international organization in scope and reality.

Johnson-Thornton was a graduate of Antioch University with a BA in Human Services and a Masters in Public Administration from Goddard University.

Audrey R. Johnson-Thornton was predeceased by her husband, Bernard Thornton Sr. in January. She is survived by her daughters; Naomi, Linda and Rebecca, and four granddaughters.

A viewing will be held from 10 a.m. to 8 p.m. Friday, April 19, at the Belmont Mansion, 2000 Belmont Mansion Drive. Another viewing starting at 9 a.m. Saturday, April 20, will be followed by 10 a.m. funeral services at St. Luke’s Episcopal Church, 5421 Germantown Ave. Burial will be in Westminster Cemetery, Bala Cynwyd.

In lieu of flowers, the family requests that donations be made to the American Women’s Heritage Society, 2000 Belmont Mansion Drive, Philadelphia, PA 19131.

A message from the family of the late Audrey Johnson Thornton