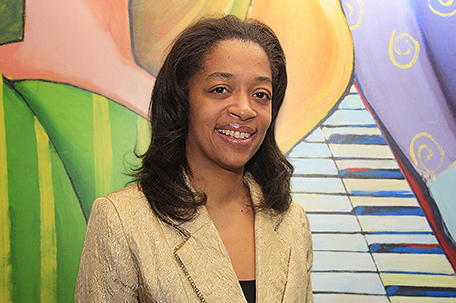 God graced this world with the birth of Davida Corrine Godett on May 21,1975 in Philadelphia, PA. She was one of two daughters born to David and Theresa. Davida went home to be with her Lord and Savior, Monday, May 13, 2019 after a lengthy health battle. Her father David preceded her in death, as well as her dad Sam.

At the early age of 13, Davida was baptized and accepted Christ into her life at Mount Carmel Baptist Church under the leadership of Rev. Albert Campbell. She was educated in Bucks County, attending Villa Joseph Marie High School during her sophomore and junior year. She graduated from Bensalem High School, where she lived and reunited with her childhood friends. Many of whom called her “Veet”.

Her sister, Samia, described her as a career student because of her passion for learning. Davida held a Bachelor of Science degree in Accounting from Widener University as well as master’s degree in Business Administration with a concentration in Management from Strayer University.

She also held higher education certificates from the Institute of Ethical Leadership of Rutgers University, a Certificate of Volunteer Management from LaSalle University, certificates in Stage 1 and 2 of Lego Serious Play Method in Organizational and Individual Development from London and a certificate from The Tuck School of Business at Dartmouth College in Building a High Performance Business in Healthcare.

She was certified in Biblical Counseling and as a Soul Coach where she used ADD (Acquire Defined Directions) for organizations and individuals through life coaching. Even at her lowest, she was studying to become a licensed minister of the Gospel of Jesus Christ under the leadership of her pastor.

Davida took adverse situations in her life and helped give “wings of hope” to those in her presence. She passionately impacted the lives of family, friends, corporations, non-profits, faith-based organizations and community centers. She delivered keynotes and workshops to help foster a healthier, prosperous lifestyle. Her drive and her strength were unmatched.

Davida was the founder and president of Caterpillar to Butterfly, LLC, an organization that utilizes Lego®Serious Play® and MTA Learning Experience, coupled with knowledge and life experience, to help individuals and groups gain “their wings.” Davida’s signature workshops “My Health, My Wealth” have been ground-breaking, supporting individuals to take control of their current health issues and look at their family dynamics to live a healthier life.

Davida appeared on various media outlets to spread the word on the importance of stroke knowledge. Her voice has been heard on Dr. Oz, HLN, ABC, NBC, Comcast Network, Clear Channel, and the Philadelphia Speak-Up.

Davida’s work was published in The Black Professionals Newspaper, Philadelphia Magazine, The Philadelphia Tribune, The Philadelphia Inquirer, The Bucks County Courier, Triose and USA Today. She was the recipient of the WDAS Second Annual Mary J. Blige Award tor Perseverance and Courage, labeling her as a “sheroe.”

In late 2009, Davida began the process of taking her adverse experience to another level, and in August 2010 “Healthy Thoughts” was launched as 5Q1©8 organization that spreads stroke awareness in the community and provides support to stroke survivors and their families.  In 2016, Davida initiated “Order My Steps” a 5K stroke walk.

Her organization, Caterpillar to Butterfly, LLC,  was also a proud supporter of Healthy Thoughts and its initiatives. Davida helped individuals to understand adversity doesn’t mean the end, but a new beginning through her book entitled, “The Promise,” which was published in 2017.

Davida was well-known for her love of God, her children and education. Her relationships with her family and friends were very special to her. “Veet” enjoyed traveling and eating at various restaurants. She was a food connoisseur, as well as a fashionista, which her daughter Gianna named her due to her love of shoes and handbags.

Davida will be remembered for her infectious laugh, as well as her outrageous burping. Davida had a caring and giving heart. She expressed it in many ways, utilizing her gift to connect with people. She would give encouraging words that helped change the lives of others.

She leaves to cherish her memory her mother Theresa; her sister Samia; brother-in-law Donald; her son Chauncey; Chauncey’s father, Clarence Richardson; her daughters Gianna and Gemiah; their father, Gerald Clarkson; stepson, Lil’ Gerald; her niece Sai; nephews London and Vegas; her godmothers Joann, Cheryl and Deborah; her godfather Meiwi and a host of aunts, uncles, family, and friends.