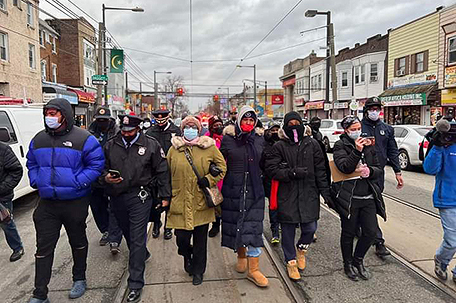 ABOVE PHOTO: Participants in Monday’s march making their way up Woodland Avenue.

For the first time since the passing of Paul “Earthquake” Moore, the re-enactment march to celebrate the birthday of civil rights leader Dr. Martin Luther King Jr. took place on the streets of Woodland Avenue. To kick off Dr. King’s march, a small group of marchers stood in front of the 12th District Police Station at 65th and Woodland Avenue.

Despite the cold temperatures, marchers were still determined to hold the event without any delays. Led by a police escort, the marchers hit the streets of Woodland Avenue walking five blocks to their destination– never missing a beat. Shortly after leaving the 12th District police station, the marchers began to sing “We Shall Overcome”. After that, it didn’t take long for the marchers to reach 70th and Woodland Avenue where a street sign hangs in Paul “Earthquake” Moore’s honor. Once the marchers had finished their journey, they gathered in front of New Fellowship Missionary Baptist Church repeating “We Shall Overcome” for 10 minutes before honoring Paul “Earthquake” Moore.

After Paulette Moore stepped away from the microphone, State Rep. Joanna McClinton (PA-191st Dist.) spoke to the small crowd as she gave more honor to Earthquake Moore.

“I’m so glad to be here with family, neighbors and friends,” said McClinton. “Today marks one year after Earthquake had won the battle — I refuse to say he lost his fight. He won his battle because he is resting in Power as he deserves to be. Today, he’s being rewarded for the great man he is. Right now, a year later, we are keeping his legacy alive. And we are going to continue to fight for peace in our streets in Southwest Philly.”

After several police officers spoke in Moore’s honor, the small crowd, holding blue and white balloons in their hands released them in the air flying over 70th and Woodland Avenue as the crowd gave a thunderous cheer.

“Today, we are trying to allow his legacy to continue,” said Amber Wilson, a long-time marcher for Earthquake Moore. “We had a good amount of people to honor his legacy. Even though it’s a one-year anniversary of his death, we do not disappoint — we came together in love, peace and happiness.–we are trying to make a difference. If it wasn’t for the Lord, we wouldn’t be here today. Even though Paul “Earthquake” Moore is not here, we want to keep it together and keep it moving. He might not be here physically. But he’s still with us spiritually.”

Wilson added that the plan for next year’s march is for the marchers to hold more meetings and gather enough information to keep Moore’s legacy going.

After Monday’s march was over, several people returned to the 12th District police station where they enjoyed a couple slices of Dr. King’s cake.

Paul “Earthquake” Moore– a fighter who has left a great legacy