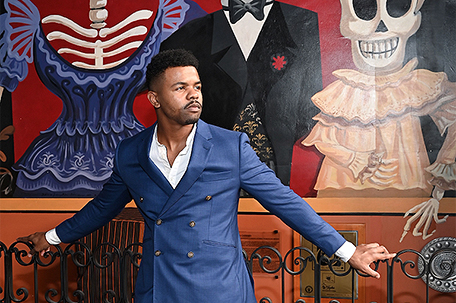 “Deceptions: A Magical Night of Mystery and Deception” is Philadelphia’s newest entertainment option on Rittenhouse Square. It features the “master of deceptions,” illusionist Mervant Vera.

“I’m a pioneer of sorts,” Vera said. “I’m the first magician who’s had a show downtown in Philadelphia. I love that, and the reason being, well, this is a joint venture between Glu Hospitality who owns Vesper and Smoke and Mirrors Magic Theater.”

Smoke and Mirrors Magic Theater, located in Northeast Philadelphia, is quite similar to the magic capital of the world, Colon, Michigan, where the magic supply house, Abbott’s Magic Co. is located, according to Vera.

“It’s honestly, probably one of the nicest magic theaters in the country — right here in Philadelphia,” Vera added. “A lot of people don’t know about it, but they’d have sold out shows all the time with traveling magicians from around the world.”

“Deceptions: A Magical Night of Mystery and Deception” featuring the many talents of Vera — who goes by the stage name “Mervant the Deceptionist’’ — launched on November 18, and is currently running every Thursday and Saturday, 6:30pm at Vesper Center City, 223 S. Sydenham St.

Since pivoting during the pandemic, Glu Hospitality recently announced the debut of this brand new weekly entertainment and cocktail experience featuring the Philadelphia native and master illusionist.

“I was born and raised in Philly — I’m from West Oak Lane,” Vera said. “That’s where I grew up. I moved around Pennsylvania a little bit but I’ve been in Philly more than half of my life. When I left for college, I did a bunch of different things and came back to Philly and now I have my own show.”

“Deceptions: A Magical Night of Mystery and Deception” brings a new, fresh and exciting dimension of entertainment to the city. Over the past five years, Vera has become one of the most sought-after entertainers in the area and around the world, performing for both celebrities and corporations.

“Glu Hospitality is all about creating unforgettable experiences and moments that bring together great food, quality cocktails, unique spaces and top-notch entertainment,” said Glu Hospitality partner Tim Lu. “Over the pandemic, we have been working hard to perfect new menus, expand use of our space and launch new programming.”

After reviewing a diverse range of talent, Vera became the top choice.

“There’s thousands of magicians to choose from and they chose me,” Vera said..

Vera first captivated people from all over the world — including Glu Hospitality and Smoke and Mirror Magic Theater — after producing a successful virtual magic experience for Airbnb.

“I did it from my own home. I became the number one magician for Airbnb,” Vera said. “I got put on their homepage worldwide. Since COVID, I’ve done over 700 virtual shows, and I have almost 700 five-star reviews.”

Before becoming a top magician, illusionist, and mentalist, Vera’s interest in magic was sparked during his late teens at the East Stroudsburg University in the Poconos as an undergraduate student.

“I was a bit of a late bloomer,” he said. “A lot of people start magic when they’re kids. I started magic around the age of 18.”

Vera’s first magic show — which he put together on his own —  was held on his college campus.

“I already had an interest in magic from watching magicians on television, and my university ended up having a few magicians come to do shows, and I thought it was so interesting,” he said. “Then one day, I walked up to a mentalist I met at the time, and I asked him, ‘Hey, do you make a lot of money doing this?’ And he said, ‘Oh, you can if you do this right, you can make a million dollars a year.’ And I started thinking, ‘wow, this is really interesting.’”

For over 14 years now, Vera has been perfecting his craft.

Magic is definitely an art form where you don’t do it for the money, Vera said

“I would have to even say that you can’t even get really good at magic or mentalism unless you just have a genuine interest,” he added.

Vera believes that a lot of times success in magic starts with curiosity.

“It’s really an empathetic art form, because I don’t get to experience magic as a magician,” he said. “I don’t ever experience magic per se. The experience I get is seeing the reaction as the spectator, giving people these moments of astonishment.”

“At Deceptions you’re going to get a piece of some of the best magic in the world,” he said. “People who come here they’re going to get not just a show, but it’s a full experience, from the experience of being in the secret speakeasy to coming in and seeing magic that you could see on stage in Vegas or things you might have seen in “America’s Got Talent,” and it’s the intimacy of it.

“This isn’t done on a giant stage where you’re 50 feet away,” Vera concluded. “The people who are in the room are immersed in a smaller space. This actually allows us to have a closer relationship with the audience where you’re not watching the show, you, yourself are an integral part of the show.”

For more information about the show, visit: www.deceptionsphilly.com.