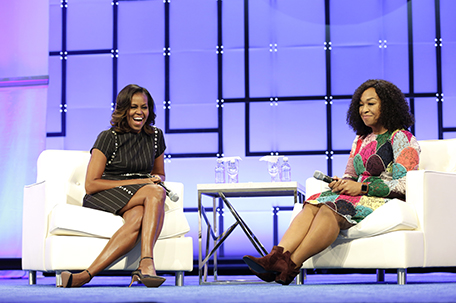 Former First Lady Michelle Obama brought a lot of first-time attendees to the 14th annual Pennsylvania Conference for Women.  But what they got from the conference itself will bring them back.

When the Pennsylvania Conference for Women announced that the keynote speaker for its annual event would be former First Lady Michelle Obama, it became the hottest ticket in town.

At a time when the White House is to some a “House of Horrors,” the chance to remember the Obama presidency — even just for a day — was enough to brave a crowd of 12,000 people.

“I can honestly say that I just miss hearing her,” said Darisha Miller of Mt. Airy. “She was a voice of hope.”

But while the former First Lady brought out a lot of women who were visiting the conference for the first time, the advice, connections, and camaraderie the women experienced at the event — held annually at the Pennsylvania Convention Center  — were more than enough to bring them back.

This was the 14th year for the conference, which is designed to not only inspire women to make their mark on the world, but also give them the tools to do it. In addition to Obama, this year’s lineup of speakers included Wall Street powerhouse Carla Harris, television mogul Shonda Rhimes, and Loraine Ballard Morrill, news and public affairs director for Philadelphia’s iHeart Radio stations.

Among the things that the Conference for Women emphasizes is the empowerment of women and how that empowerment can change the Commonwealth. 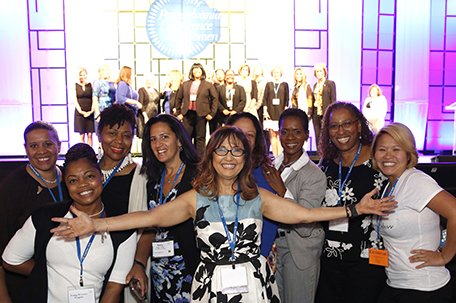 This year’s turnout gave Leslie Stiles, president of the Conference’s board, hope.

Political engagement goes a long way toward getting things done. Only 19 percent of the United States Congress is made up of women, and none of them are from Pennsylvania. 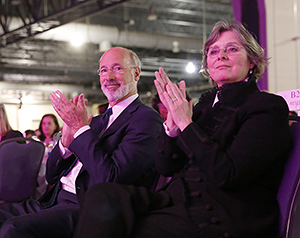 PA Gov. Tom Wolf, who also spoke during the Conference, applauding during the luncheon speeches. (Photo by Marla Aufmuth/Getty Images for Pennsylvania Conference for Women)

“You need to be as engaged as possible to combat the backward and inane ideas that are coming down the pike now,” he said.

In a talk that reminded many of why they liked her so much, Michelle Obama brought insights gained from spending time in both the boardroom and the White House. She and Rhimes also talked about what Obama is doing now, what she hopes to do, and how she hopes to help empower the next generation.

Since leaving the White House, Obama has been taking time to access the last 10 years — a period where she went from being a successful attorney, wife, and mother to being one of the most watched women in the world.

There wasn’t a lot of time for introspection then, which is why she’s glad to have it now, Obama said.

“It was like being shot out of a cannon,”she said. “There’s not much time for feelings. Living in the White House, I was doing what probably everyone in this room is doing: juggling a career, trying to be relevant, trying to make sure that your marriage is intact and that your kids are healthy, but you’re doing it under the harshest light possible with people judging and supporting, judging and supporting along the way.”

Much of the conversation between the two women centered on the importance of not only finding, but using your voice as a woman in the current day.

While both Obama and Rhimes admitted that standing up was no problem for them, it also wasn’t a skill that came overnight.

It has to be learned and learned early, Obama said. Especially for young girls. 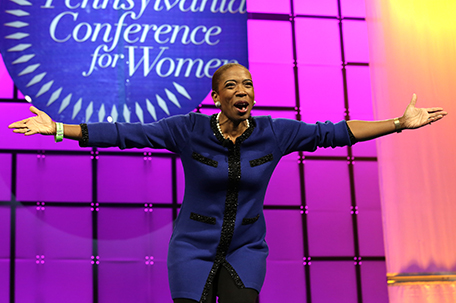 “My parents always thought that what my brother and I had to say was important,”’she said. “We were never shushed. Girls are often shushed in life. We’re sometimes not treated like real beings.”

While her father taught her how to box and do other things commonly associated with boys when she was younger, that’s not every young girl’s experience, Obama said.

Fathers sometimes treat their daughters like they have to shield them from life, While it’s done out of love, it sends the wrong message.

“It’s not enough to love a girl,” Obama said. “You have to treasure her and respect her.”

The ability to stand up for yourself becomes a way for women to shield themselves from “imposter syndrome,” or the feeling that you’re in a space you haven’t earned.

Letting that silence you as a woman can have unintended consequences, Obama said.

“I have been at so many tables with so many fools that are imposters,” she said. “But shame on us if we sit by and let an imposter talk us down. Speak up.”

“Don’t waste your seat at the table” she continued. “If you’re not going to use your voice, give it up to someone who will.”

While she’s finishing up her memoirs, taking care of her family, and working with former president Barack Obama on the upcoming Obama Foundation summit, Michelle Obama is also taking some time out to do, well, nothing.

“It’s good,” she said of relaxing. “It’s really good. Maybe after a year, I’ll be chomping at the bit. But right now, I like chilling.”

Toward the end of the talk, the former First Lady got a surprise visit in the form of a 25th Anniversary video love note from her husband, former President Barack Obama, that caused the crowd to roar.

In addition to hearing from the high-powered keynote speakers, there were workshops on branding, creating your own business, financial freedom, and work/life balance.

As a business owner, she appreciated the learning opportunities.

“As a business owner, you have to keep learning,” Miller said. “I’ve gotten a lot of great tips while I’ve been here.”

Wanda Young-Logan of West Philadelphia was also a first-time attendee. As someone who is making a career transition, she appreciated the inspiration.

“I don’t know what took me so long [to come to the conference],” Young-Logan said. “It was a re-awakening for me. Everybody there was so friendly, and there was a definite unity.”

The next Pennsylvania Conference for Women is scheduled for Oct. 12, 2018.