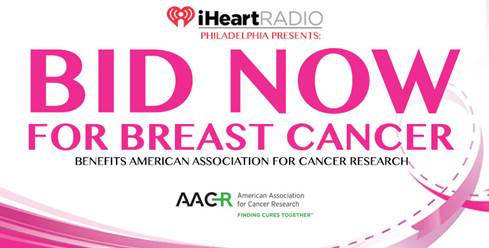 iHeartMedia Philadelphia will host the annual Bid for Breast Cancer, a fundraiser to benefit the American Association for Cancer Research (AACR), the world’s first and largest cancer research organization, headquartered in Philadelphia. The fundraiser will include an auction beginning Monday, October 9 at 12 p.m. through Monday, October 16 at 12:00 p.m.

Listeners, collectors and auction enthusiasts can visit power99.com, q102.com, radio1045.com, wdasfm.com and real1061philly.com to preview and place bids on items such as a signed guitar from Green Day, a Coach bag signed by Selena Gomez and boxing gloves signed by Floyd Mayweather and Conor McGregor. iHeartMedia Philadelphia’s on-air personalities will encourage listeners to support AACR and place bids during the fundraiser.

“Again this year, we have pulled together all the resources of our six stations to collect one-of-a-kind autographed items to benefit a cause that affects many women in our community,” said Brian Check, Vice President of Programming for iHeartMedia Philadelphia. “AACR is known for bringing together the greatest minds in cancer research, and helping patients worldwide as well as right here in the Philadelphia area.”

“In 2017, more than 300,000 women will hear the words, ‘you have breast cancer,’” said Mitch Stoller, Executive Director of the AACR Foundation. “The AACR’s mission is to prevent and cure all cancers, including breast cancer which is the second most common cause of cancer-related death among women in the United States. We are grateful to iHeartMedia Philadelphia and the community for their support in this Bid for Breast Cancer. Proceeds will enable the AACR to fund groundbreaking cancer research that will lead to more cancer discoveries, saving more lives.”

In 2016, iHeartMedia Philadelphia raised over $15,000 during Bid for Breast Cancer to benefit AACR.