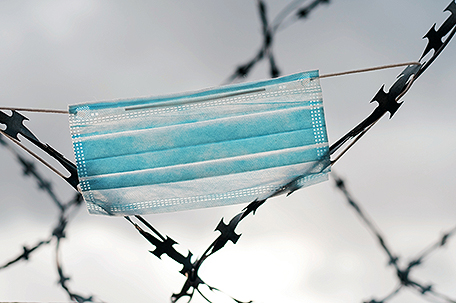 Members of the Black Clergy of Philadelphia and Vicinity, Philadelphia City Council, and District Attorney Larry Krasner came together on Tuesday to demand that more non-violent offenders be released from the city’s jails to stave off the coronavirus.

One of the things that everyone has had drummed into their heads from the moment the first coronavirus case hit the City of Philadelphia is the importance of washing your hands.

But when you’re in a prison, keeping your hands clean can be complicated. Hand sanitizer is out, because the alcohol in it proves too tempting for inmates with substance abuse issues, city officials say.

And sometimes, you don’t even have access to basic soap and water. In Module #3 of the Riverside Correctional Facility on State Road, the hand sink that inmates used to wash their hands was broken for two weeks during the pandemic and a mop closet —- the only other water source available to inmates that wasn’t also being used to make ready to eat foods —- was inaccessible due to state regulations.

It made a place that was already susceptible to getting hit hard by the coronavirus just that much more so, said former State Rep. Movita Johnson Harrell. Johnson Harrell was an inmate at Riverside Correctional and saw the conditions first hand. She was an inmate on Module #3, living two doors down from Yvonne Harris, the first of the city’s inmates to die from the virus.

Johnson Harrell herself had to quarantine when she came home because she had contracted the virus as well.

“We didn’t have access to gloves, masks or testing,” she said. “RCF went into full restrictive movement on March 23, and we were supposed to be social distancing, but that’s almost impossible in prison. I worked in the kitchen, so I was an essential worker. But I didn’t get a mask until the day before I left jail.”

“I’m grateful that it seems like we’re working a little faster to get some of these women out,” Johnson Harrell continued. “But the people in prisons are not safe. They’re not being properly tested and we’re not testing enough people. We need to get low-level offenders —- people in for things like prostitution and parole violations — out now. Right now, they’re sitting ducks.”

Johnson Harrell was just one of the speakers at a press conference convened by the Black Clergy of Philadelphia and Vicinity on Tuesday morning. She joined the Rev. Robert Collier, president of the Black Clergy, members of Philadelphia City Council, and District Attorney Larry Krasner in calling on the First District courts to reduce the City’s prison population to a point where such things as social distancing are possible.

“We need to get it reduced to 2,500 now,” Collier said. “While we appreciate that the powers that be in Pennsylvania have moved to release almost 4,000 inmates from local and state institutions, there’s still many more who should be allowed to come home.”

Currently, Philadelphia has 3,816 people in city jails, Krasner said. Right now, the holdup appears to be on the court’s side, due to an inability for inmates and their attorneys to connect and for court hearings to take place during a global pandemic.

Krasner believes that the problem could be solved using the very technology used to hold this press conference. If video conferencing were available to defense attorneys, that would help a lot, he said. It would also be a good idea to have a remote court with public access.

And before you make the “security risk” argument, don’t, Krasner said.

“We need to have a bonafide remote court and it should be accountable to the public,” he said. “There’s a constitutional right for the public and the press to be in the courtroom.”

Members of Philadelphia City Council took the in-custody death of Harris very personally, Councilmember Jamie Gauthier (D- 3rd Dist.) said. Because of this, they’re willing to put pressure on the First Judicial District to come into the two courtrooms set aside to release prisoners due to the coronavirus to do their job, she added.

And some of that pressure could be in the form of appropriations, Councilmember Curtis Jones (D- 4th Dist.), co-chair of the Council’s Crime and Justice Committee said. President Judge Idee Fox has refused to talk with Krasner or Chief Defender Keir Bradford-Grey about releasing low-risk offenders, and more inmates have contracted the coronavirus as the prisons continue to be crowded.

Now that Mayor Jim Kenney has been forced to reopen the budget due to spending necessitated by the coronavirus, there might be a way for Council to get Judge Fox to pick up the phone, Jones said.

“We are not satisfied,” Jones said. “In 10 days, we will be looking at a revised budget. It will come as a shock to no one that we are in deficit mode and that we will be looking at line items with a fine tooth comb. We will make sure that the Defenders and the District Attorney need to do their jobs and that the courts do their job. Sometimes, the only resource Council has is the bully pulpit and the appropriations process.”

But whatever they do, Johnson Harrell believes it needs to be done quickly.

“I want better for the men and women on State Road,” she said. “I met people who came into these places and they were terrified because they know that these places are incubators for the virus. They’d tell me “I don’t want to die here.”