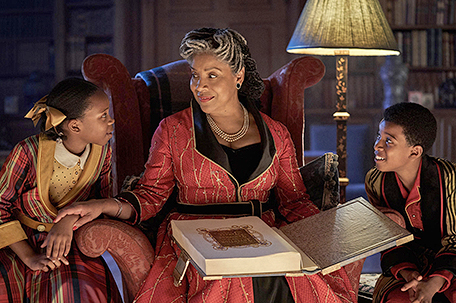 Fans of holiday films are familiar with classics like “It’s A Wonderful Life,” “Scrooge” and “Miracle on 34th Street”. All of these films have several elements in common: fantasy — and a whimsy that makes anything feel possible. But these films also lack one element — diversity.

Writer and director David E. Talbert and his producing partner and wife, Lyn Sisson-Talbert, are changing the landscape of this genre by centering Black people in the magic of holiday films. The couple — who have been creating award-winning stage productions and films for decades  — have created an instant classic with their latest film, “Jingle Jangle: A Christmas Journey.” The holiday musical and period piece —set from the 1860s to the 1890s— is the first original live action musical for Netflix.

“Jingle Jangle” tells the story of a brilliant inventor and toymaker Jeronicus Jangle (Forest Whitaker). Jeronicus hopes to change his family’s life for the better by sharing his latest creation, Don Juan Diego (Ricky Martin), a sentient action figure, with the masses. His plans are halted when his once devoted apprentice, Gustafson, steals his book of inventions and starts a toy empire of his own.

Tragedy strikes again when Jeronicus’ loving wife Joanne (Sharon Rose) dies and his daughter Jessica, a skilled inventor in her own right, is left in the shadows of her father’s broken heart. Thirty years pass as Jeronicus attempts and fails to rediscover his joy and creativity. Jeronicus’ granddaughter Journey (Madalen Mills) is the only beacon of hope that can help restore Jeronicus’ belief in the impossible.

Rounding out this dynamic cast are Keegan-Michael Key as Gustafson, Phylicia Rashad as grandmother Journey, Justin Cornwell as Young Jeronicus, Lisa Davina Phillip as Ms. Johnston, Anika Noni Rose as Jessica Jangle, Hugh Bonneville as Mr. Delacroix and Kieron L. Dyer as Edison. David E. Talbert and Lyn Sisson-Talbert sat down with The Philadelphia SUN to talk about the journey to create this incredible film.

In true full circle moment fashion, the Talberts consider Philadelphia a vital player in the beginning of their love story. When David and Lyn were still dating, he invited Lyn to a production of his “Mr. Right Now” tour at the Merriam Theater — ironically it became their first time working together.

“Philadelphia was the start of my producing career,” Lyn recalled. “It was my first time jumping in the water, being part of the production behind the scenes… doing wardrobe and hair.”

“She has added that kind of value to everything we’ve done!” David added. “It’s not “behind every good man,” it’s “beside every man is a good woman” and we’ve been lock step ever since. She has helped with her aesthetics, artistry and just who she is to elevate everything we’ve done from day one… but day one was right there in Philly.”

We’ve heard the sentiment “representation matters” repeatedly and the truth of that statement continues to ring true. Throughout their careers respectively, the Talberts have been intentional about giving a platform to Black stories. The original concept of “Jingle Jangle” began 20 years ago and came to fruition after the birth of their son Elias.

David Talbert explained how memories of his favorite childhood films were the catalyst behind creating the film.

“This was really a love letter to my childhood and wanting to see the kind of films that I grew up watching,” he said. “I’ve always wanted to see us in a magical film with wonder and music… but we weren’t represented.  I wanted to give something to the world, but also something with characters that look like my son and look like so many other children of color in the world.”

The brilliance of Jingle Jangle deserves to be seen by the masses,and as of November 13, it can be. Lyn shared their experience partnering with Netflix.

“When David went into the room to pitch the film, it was from the perspective of ‘what are you looking for?’ Netflix wanted a big idea and he had one,” she said. “He explained to them the situation and also spoke about representation. They said immediately, we need to change that, you’re right… representation is important in a world like this. So, to have that kind of support from the beginning is amazing. They also told him, which you never hear, ‘write your imagination, not your budget.’ From there it was like the sky is the limit. It was an amazing process working with them. To be able to bring a magical world like this to life with CGI and visual effects… it just took our minds to a whole new level and opened up a new world for us as far as film making.”

Aesthetically, “Jingle Jangle” is absolutely stunning. The vibrant colors, set design, choreography and the costumes by Michael Wilkinson, which include textures and fabrics from various parts of Africa, all play necessary roles in bringing the magic of Jingle Jangle to life. It also highlights the intentional celebration of Black hair in its natural state.

“For it to be a period piece, I didn’t want it to be Victorian wigs on Black women.” Lyn said. “Just looking at the time frame, we are only one generation away from where your ancestors came from… be it Africa, The United States or The Caribbean.

With that in mind, I wanted to highlight our hair in its natural state, in these beautifully shaped styles to show how amazing it can be. One of the things I have to say I’m most proud of are the costumes and hair designs. It was about making something timeless and normalizing our styles and our heritage within the styles.”

In addition to highlighting the diversity of Black hair and style, “Jingle Jangle” also pays homage to Black inventors and trailblazers.

“All of the signs in all of the buildings are named after firsts.” Lyn explained. “For example, on the music building it’s Rosetta Tharpe — Tharpe Music Co. She was considered “The Godmother of Rock ‘N’ Roll.” My father was the first Black optometrist licensed in the state of Nevada and we named a building after him. David’s great grandmother was one of the founding pastors of the Pentecostal Church, which is the name of the sweets shop right in the square of Cobbleton. All of those names give homage to inventors and people who were first. We were very intentional in that and wanted to give honor to those who are sometimes unheralded in history.”

The caliber of talent in “Jingle Jangle” is equally as impressive as the attention to detail present in this film — particularly that of newcomer Madalen Mills.

“We did a worldwide search for Journey and Madalen came in there and stole it… it wasn’t even a fair fight. She stole the role and our hearts. We’re looking at Shirley Temple, Judy Garland — that kind of entrance into the business,” David said.

Anyone experiencing the adventure that is “Jingle Jangle” will immediately take notice of its enchanted soundtrack.

“Phil Lawrence and John Legend tapped into what was in my heart, soul and mind and put it to music,” David said. “Phil Lawrence is a force of nature. He’s got a big spirit and personality. John Legend is just a technician and a marksman when it comes to music and he’s full of soul and feeling. That’s what we wanted, a soulful celebration bottom but we wanted you to feel something in each of the songs and they were masterful in that.”

“We cast a big net with musicals I grew up with — “The Wiz,” “The Greatest Showman,” “Dream Girls”… just so many wonderful genres to pull from,” he added. “We wanted it to be an eclectic thing that had a soulful and orchestral through line, which is why we had the great John Debney do the score.”

Not only was the world gifted the film version of “Jingle Jangle,” but children can receive the reminder that anything is possible in the form of two books: “The Square Root of Possible: A Jingle Jangle Story” and “Jingle Jangle: The Invention of Jeronicus Jangle,” written by Lyn and David E. Talbert.

“I was so excited about this,”Lyn said. “The song, “Square Root of Possible,” has been my theme while making this film. It was a tough road with so many worthwhile moments and I was everyday finding my square root of possible. The whole idea behind doing the picture book “The Square Root of Possible” happened because my son is in that age range and I wanted him to look at it and say, ‘what’s my formula?’

“We also included the lyrics to the song in the back of the book so that they could sing along,” she continued. “Atlantic was so great — they gifted anyone that purchases any of the books and uploads their receipt a free download of “Square Root of Possible.” With the middle grade book, “The Invention of Jeronicus Jangle,” we had a full circle moment. We not only did a paperback version, but an audio version, where Phylicia Rashad is reading the audio book.”

Keep your eyes peeled for the upcoming Broadway version of “Jingle Jangle.” In the interim, be sure to purchase “The Square Root of Possible: A Jingle Jangle Story” and “Jingle Jangle: The Invention of Jeronicus Jangle” on December 1 at: www.penguinrandomhouse.com.

“Jingle Jangle: A Christmas Journey: is currently streaming on Netflix. Add it to your family’s list of must-see films this and every holiday season… the journey to the square root of your possible awaits!

Q102’S Jingle Ball 2018, presented by Capital One, rings in the season with annual star-studded holiday concert