How I found myself in my history 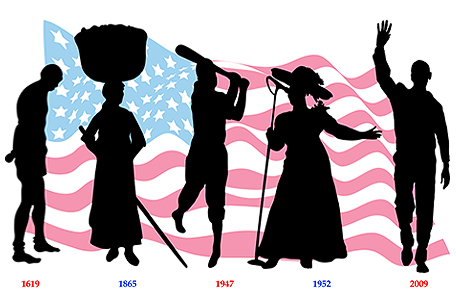 1. the quality or fact of being of black African origin.

The United States prides itself on a feigned sense of acceptance, high levels of diversity and “inclusion”. Ironic, because this country is the epitome of erasure and is nothing of the sort.

I realized that I was Black long before I understood the weight of my skin, which is due in part to the fact that this country’s school curriculum glosses over the heinous transgressions it has taken part in. American children alike are often shielded from the truth, leaving us disadvantaged at best.

I’ve speculated the reasons as to why that is and came to various conclusions – the most prevalent being the “forgive and forget” mantra White America so desperately wants Black folk to live by, yet doesn’t want to practice themselves.

Per my experience, Black History has been treated as both an afterthought and an inconvenience.

Throughout my grade school sojourn, I recall slavery, the Civil Rights Movement, etc., being discussed with brevity. Similarly, we learned about the same five historical Black icons year after year, no more and no less. Because of this, I genuinely believed that the issues of racism, prejudice, White supremacy and so forth were things of the past, (that’s what they want you to believe) until 2012, when Trayvon Martin was brutally murdered by an immoral bigot.

I foolishly believed that there was no way that George Zimmerman could get off on murder charges, but I was wrong. I also thought that everyone in this country was in agreement that Zimmerman was guilty – I was wrong about that, too.

The fallout from that occurrence paired with the senseless killings that followed, opened up the door to a world I’d never known about. Out of curiosity, I started to educate myself on all that the school system failed to educate us on and I developed a passion. What happened that made this country like this? How long has this been going on? Who am I? Where do I come from?

My interest was piqued, so when given the chance, I elected to take an African American History course during my senior year of high school. I wasn’t sure how it would go because I’d always thought American history was a snoozer, but the course changed me.

In the pursuit of being a talk show host, I decided to major in Communications Studies when I got to college. I initially hadn’t planned on picking up a minor, but the way the Comm. Studies program is set up at West Chester, students are encouraged to.

By happenstance, I found out that the school had an African American studies minor, so instead of minoring in journalism like my advisor suggested, I decided to continue my quest to learn more about my people; proving to be one of the best decisions I’ve ever made.

Due to my experience, I reason that Black Studies should be a required course… not because I’m Black, but because the United States was cultivated on the backs of Black folk, yet little to no respect and/or recognition to our history is shown. I also realized that many White students who attend PWI’s have never come in contact with a Black person before, which leaves their perceptions of us to be decided by mainstream media, which hardly paints an accurate picture.

The Black studies courses I took reformed my life in more ways than one. I mentioned before that the lessons I learned in grade school about Black history were trite, but I failed to mention that I found many of the anecdotes to lack veracity.

Prior to my immersion into Black history, I was ignorant to all that we have been, all that we are, and all that we can become. Like many, I assimilated to White culture, even deeming some of the things they say/think about us as fact… I surmise I’m not alone in that.

I may or may not have mentioned this in a prior article, but there was a time when I struggled with my own identity. People would tell me that I sounded White, talked White, wanted to be White, etc., and although that was never the case, I always felt that I wasn’t Black enough. Minoring in African American history allowed me to see that Black has no set shape, sound, interests, look and beyond.

Post college, I’ve continued my education on the subject and have read an abundance of books. All of this has allowed me to educate those around me on things they may not have known otherwise, which is always a blessing in itself.

For those who have questioned whether or not Black studies should be a required course, I hope that I’ve answered the “why.” Black people are a proud people with a painfully beautiful history that must be taught in entirety for more than just one month out of the year. Black history is American history, and should be treated as such.