How Did We Get Here? 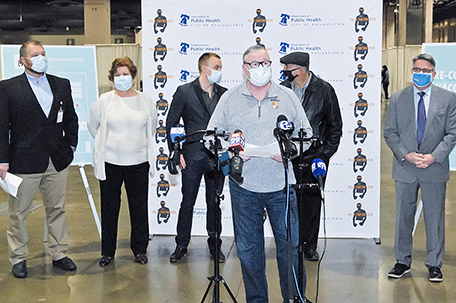 On Friday, Philadelphia City Council will try to figure out how the city’s COVID-19 vaccine effort ended up in the hands of a bunch of undergraduate students from Drexel.

For the last week, Philadelphia residents have been asking one question of city officials regarding the city’s COVID-19 vaccination response.

That question: Who’s bright idea was it to give the contract for that response to a group of undergraduate students from Drexel University that had no experience in healthcare or healthcare administration?

On Friday, City Council’s Committee on Public Health and Human Services will bring in members of the Kenney Administration and others to get to the bottom of how the city’s coronavirus vaccine effort went so horribly awry.

Last week, the City cancelled its contract with Philly Fights COVID, the group of healthcare entrepreneurs that had done a mass vaccination event for unaffiliated healthcare workers at the Pennsylvania Convention Center. News reports, most notably CEO Andrei Doroshin’s “Today” show appearance where he admitted taking unused vaccine home and administering it to his friends, led to calls for the resignation of Health Commissioner Thomas Farley and demands for accountability all around.

Who should be held accountable is just one of the things that Council will be trying to get to the bottom of with these hearings, said Councilmember Cindy Bass (D- 8th Dist.), chair of the Public Health and Human Services Committee. While Philly Fights COVID came to Council to share their plan for vaccinating city residents, Council felt blindsided by the city’s decision to bring them on, Bass said.

Right now, Bass continued, the public doesn’t trust its government regarding the vaccination response. The hearings are a step toward changing that.

“Gaining public confidence is critical to fighting a disease like COVID-19,” she said. “Right now, the trust is broken. Things were not handled properly. There were a lot of red flags and we want to get to the bottom of it. We’re inviting all parties to come in and testify and tell the citizens and council what they know. This is the first step in getting to the bottom of this and making sure that it doesn’t happen again.”

A group of Philadelphia-based state legislators has called for Health Commissioner Thomas Farley’s resignation in light of the Philly Fights COVID debacle. In a statement issued after meeting with members of the Philadelphia Delegation, State Rep. Jason Dawkins (D-179th Dist.), delegation chair, said the change was necessary to restore trust.

“While in the crisis of our lifetime, the ball was dropped and left Philadelphians at risk, both for their personal information and their personal safety,” Dawkins said. “Dr. Farley has worked hard for Philadelphia, but in a moment when people’s lives are in jeopardy and when the world is watching, we cannot have such horrible decisions putting the lives and health of our citizens so at risk. The loss of the public’s trust requires that we have a change at the department. Things need to change to ensure everyone has a sense of security moving forward.”

“The missteps and missed opportunities that we have seen from Philadelphia’s health department have been many,” State Rep. Malcolm Kenyatta (D-181st Dist.) said. “And in the middle of the deadliest health crisis in global history we can’t afford anymore. Commissioner Farley worked incredibly hard on testing but has unfortunately not met the moment in regard to quickly getting out the vaccine in an equitable way. And the Philly Fighting COVID debacle has become a national stain on the city.

I don’t say this lightly, but Dr. Farley must resign, and we must immediately find a leader up to the task – failure is not an option.“

But if the delegation thought that this would lead to Mayor Kenney showing Farley the door, the mayor made it clear at a press conference on Monday that he had his Health Commissioner’s back.

“I feel that I can still contribute to this response,” Farley said. “But I serve at the pleasure of the mayor. If he asks me to resign, I’ll resign.”

“And I’m not asking,” Kenney responded.

In fact, the only person who has resigned in connection with the Philly Fights COVID debacle was Dr. Carolyn Johnson, who until resigning last week was coordinator of the city’s coronavirus vaccine response.

Council also introduced an ordinance on Thursday that would establish guidelines for city contracts regarding vaccinations, which hadn’t been established prior to the Philly Fights COVID debacle.

Also, the Health Commissioner or any designee of the Mayor, would be required to post information on the vaccine, who got it, and other information to the public every two weeks.

“More than 105,000 people have contracted this virus in Philadelphia, and over 2,800 people have died,” Council President Darrell Clarke said at a press conference announcing the ordinance earlier this week. “We have 1.5 million people to get vaccinated.

We have to get this right. People need faith that their government can keep them safe and deliver them vaccinations fairly and equitably. Council intends to do its part to ensure that.”

On Wednesday, the city opened the first of six city-run mass vaccination clinics at the Pennsylvania Convention Center with the goal of vaccinating 500 people a day. Grocery stores and pharmacies will also begin offering the vaccine to people aged 75 and over.

Friday’s public hearing will be broadcast at 1pm on Channel 64 (Xfinity), Channel 40 (Fios) or online at: www.phlcouncil.com.